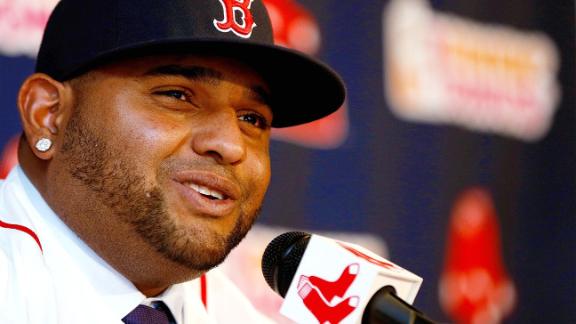 Boston Red Sox third baseman Pablo Sandoval said in a recent interview that he felt disrespected by the San Francisco Giants' negotiating stance toward him and knew as early as spring training last season that he would leave the team as a free agent.

Sandoval told Bleacher Report that it wasn't hard to leave the Giants after winning a third World Series title in five years and that the only people in the organization he misses are manager Bruce Bochy and outfielder Hunter Pence.

"If you want me around, you make the effort to push and get me back," he told the website.

He said the offer from the Giants that he turned down in the offseason was more lucrative than the five-year, $95 million contract that he signed with the Red Sox.

"The Giants made a good offer, but I didn't want to take it," he told Bleacher Report. "I got five years from Boston. I left money on the table in San Francisco.

"It is not about money. It is about how you treat the player."

Sandoval, who had spent all seven seasons of his career with the Giants until this season, told the website that negotiations with the club that broke down last spring ended any chance he would re-sign with the team.

"I knew early in spring training last year I was going to leave," Sandoval told Bleacher Report. "They didn't respect my agent -- contract talks, everything, the way [Giants general manager] Brian Sabean talked to my agent."

Sandoval Excited To Be With Boston
Red Sox third baseman Pablo Sandoval discusses his new teammates and the controversy surrounding his weight.