More than 49,000 UAW members go on strike against General Motors 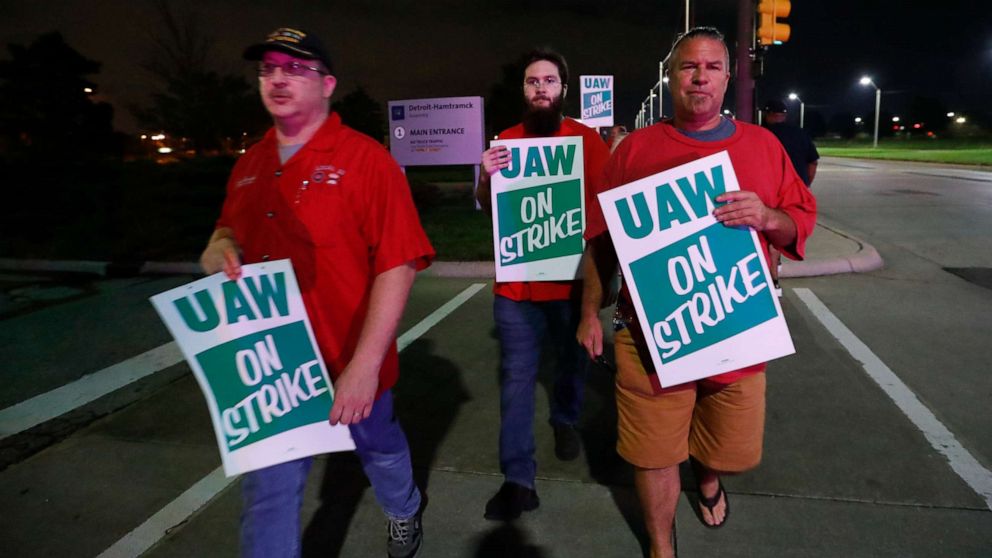 More than 49,000 union workers for General Motors walked off their jobs Sunday night at and went on a nationwide strike after negotiations for a new labor contract hit a stalemate.

"At midnight tonight, the picket lines will go up," Rothenberg said. "But basically, when the morning shift would have reported for work, they won't be there. The picket lines are being set up."

UAW confirmed in a one-sentence statement at 11:59 p.m. that the strike had begun. Workers were filmed marching outside a GM assembly plant in Hamtramck, Michigan, at midnight.

GM officials said they have offered the UAW promises to invest more than $7 billion in the United States, add more than 5,400 jobs and improve benefits.

"We presented a strong offer that improves wages, benefits and grows U.S. jobs in substantive ways and it is disappointing that the UAW leadership has chosen to strike at midnight tonight," GM officials said in a statement Sunday. "We have negotiated in good faith and with a sense of urgency. Our goal remains to build a strong future for our employees and our business.

A strike was called after UAW leaders from across the nation met in Detroit on Sunday morning to consider what action to take after the workers' labor contract expired.

Union leaders claimed that GM officials "refused to give even an inch" to reach a new agreement contract.

"We stood up for General Motors when they needed us most. Now we are standing together in unity and solidarity for our members, their families and the communities where we work and live," said UAW Vice President Terry Dittes in a statement after a strike was authorized by union leadership.

Union leaders have argued that GM workers deserved a bigger slice of the company's record profits, which they say have totaled $35 billion in North America over the last three years. In August, GM reported solid second-quarter earnings with income up $2.4 billion, an increase of 1.6% over the previous year.

Union members are calling for higher wages, retention of a health insurance plan in which workers pay about 4% of the costs, an improved pension plan and assurances that GM -- the makers of Buick, Cadillac, GMC and Chevrolet -- will not close four plants in Maryland, Ohio and Michigan.

The strike comes nearly a year after GM announced it was laying off 15 percent of its salaried workers and shuttering five plants in North America. At the time, the company said it was "transforming its global workforce to ensure it has the right skill sets for today and the future, while driving efficiencies through the utilization of best-in-class tools."
Report a correction or typo
Related topics:
abc newsnational
Copyright © 2021 ABC News Internet Ventures.
More Videos
From CNN Newsource affiliates
TOP STORIES