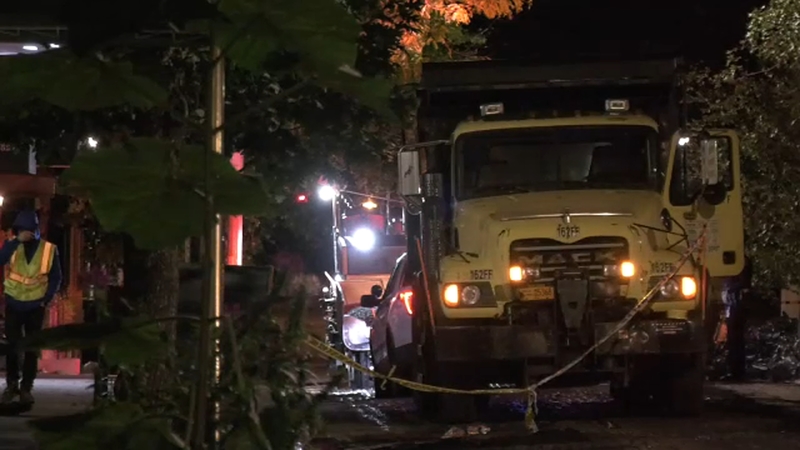 UPPER EAST SIDE, Manhattan (WABC) -- A New York City Department of Transportation worker was killed when a colleague accidentally ran him over while repaving an Upper East Side street.

Authorities say 44-year-old Eduardo Calleabril was standing on East 88th Street while working on a street repaving project just after 1 a.m. Tuesday when his 35-year-old coworker backed up a DOT truck without realizing the victim was behind him.

He accidentally ran over Calleabril, who was rushed to New York-Presbyterian Hospital/Weill Cornell Medical Center. He later died from his injuries.

Tragic news on the Upper East Side this morning. @NYC_DOT veteran Eduardo Calleabril was struck by a vehicle and lost his life while working with a resurfacing crew. Please keep his family in your thoughts today.

We’re undertaking a full investigation into how this happened.

"I heard a lot of yelling, it sounded like people were extremely upset," said Casey Gillotti, who lives in an apartment on the block and came outside to find several DOT workers inconsolable. "They were upset. There were men who were distraught, horrified, shocked, and it was a lot of tension."

People who were sleeping in the buildings along the street heard the aftermath.

"I was woken up by some frantic screaming, people screaming, 'No, stop, backup, stop!'" another area resident said. "And when I went to look to the window, it appeared across the street that one of the workers, the road pavers, was crushed by a dump truck."

Coworkers brought candles and flowers to the scene as police investigated.

"There were a couple of guys screaming at someone, not the guy driving the truck, the guy driving the truck was in complete shock, based on the angle, he didn't see him," another witness said. "But there was somebody apparently giving him directions, they kept screaming at him...another guy came over and said, 'It could've been me,' and the police and his buddies had to separate him."

The operator of the DOT vehicle was interviewed by the police, but Calleabril's death is being investigated as an accident.

The investigation is ongoing, and DOT Commissioner Polly Trottenberg released the following statement:

"Early this morning, Eduardo Calle Abril, a four-year DOT employee in our Roadway Repair & Maintenance division, was struck and killed by an agency truck while he performed paving work on the Upper East Side.

This is a painful moment for the entire DOT family. We mourn the loss of our colleague and our thoughts and prayers are with Eduardo's family, friends and coworkers. The tragedy reminds us all of the incredibly challenging work the women and men of our resurfacing and pothole crews do to keep our streets in a state of good repair. We are grateful for their service on behalf of all New Yorkers.

An NYPD investigation is underway and DOT is also actively investigating the incident."