Cardiologist on way to NYC lecture killed in plane crash

WABC
COLONIA, New Jersey (WABC) -- The body of a pilot killed when his plane crashed into a New Jersey home has been recovered as the investigation into the doomed flight continues.

The crash happened around 11 a.m. Tuesday on Berkley Avenue near Princeton Avenue in Colonia.

The 74-year-old pilot, Dr. Michael Schloss, was said to be an experienced pilot who was flying from Leesburg, Virginia, to Linden Airport.

"The pilot was communicating with air traffic control and was cleared for an approach into Linden Airport and the airplane subsequently lost radar contact," the NTSB said. "We have no information that there was a distress call made from the pilot."

Schloss worked in New York City, but his plane was based in Linden. He was supposed to give a lecture at New York Presbyterian on Wednesday.

"Dr. Schloss was an amazing man, I've known him over 30 years, I've been here in Linden for 36 and he was here for most of that time, he was really a renaissance man in the true sense of the word -- he was a renowned cardiac doctor and he was very generous in that he used his specialty to help pilots that may be having difficulties getting through the FAA's medical certification for instance," said Paul Dudley, the general manager of Linden Airport.

RELATED: Residents run toward disaster to help neighbors after plane crash in Colonia

Crews continued the painstaking task of sifting through every piece of rubble Wednesday with a keen eye for clues.

Teresa Pitera and Jurek Kmiotekhe, the owners of the home the plane crashed into, released a statement on Wednesday:

"We want to extend our deepest thanks for all the support pouring in. We're thankful that we were unharmed and that no one in the immediate neighborhood was injured. Our thought and prayers are with the pilot of the plane. We do not have any thing further to state and we appreciate our privacy during this difficult time. Thank you for your understanding."

Residents of the homes damaged in the fire are staying with family or in hotels. Their immediate future is uncertain, but donations have poured in to help those impacted by the crash.

"It was not easy to see what I saw, it's pretty much destroyed on one side of the house," homeowner Douglas Szaro said. "The walls are missing, the ceiling is caving in. The plane hit the side of the house pretty bad."

The NTSB and FAA will continue their investigation into what caused the crash.

Video captured the final moments as that Cessna 414 seemingly took a nose dive from the sky and into the home.
EMBED More News Videos 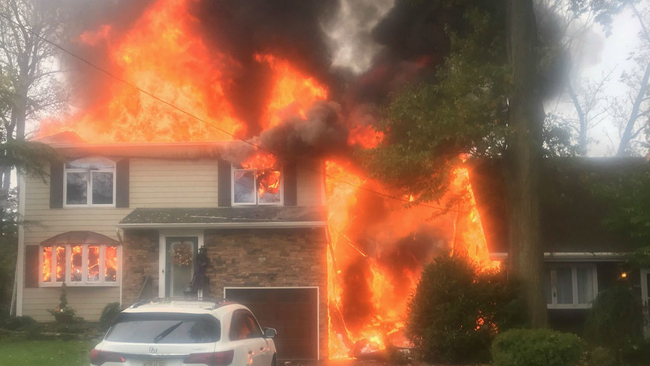