7 On Your Side Investigates: What's behind increase in NYC traffic fatalities 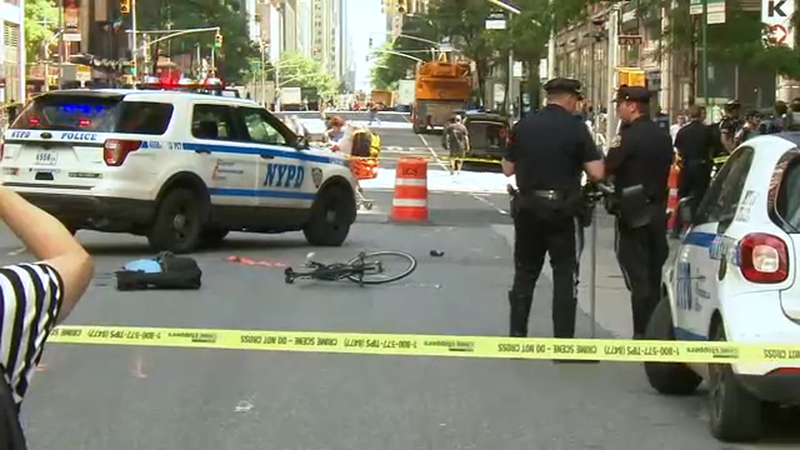 7 On Your Side Investigates: What's behind increase in NYC traffic fatalities

NEW YORK (WABC) -- This year has marked a spike in traffic fatalities after back to back years of overall decreases in traffic deaths under Mayor Bill de Blasio's Vision Zero initiative.

Commuters generally blame the troubles on congestion and individuals failing to share the road.

"The bikers are the worst," said Inez C, a pedestrian.

"The taxis and Uber drivers, that is where the danger usually is," said Klaud Lucas, also a pedestrian.

"The bikers, they do not follow the rules," said Yeakub Kli, a driver.

"I think a lot of drivers either don't see us bikers or don't care," said Clara Green, a cyclist. "Everyone needs to think of the other side."

Eyewitness News set up cameras at various New York City intersections over several weeks and caught every type of commuter contributing to the problem.

We found pedestrians crossing streets more occupied with their cell phones, drivers testing the limits of traffic signals and cyclists speeding through red lights and traveling against oncoming traffic.

"You have to keep your eyes peeled in every direction," said one pedestrian, complaining about what she described as chaos.

"There are so many distractions," complained one cyclist who only gave his first name, Russ.

The city's 2019 mobility report analyzing traffic trends indicates more people are choosing to walk and bike in the city, rideshare vehicles, and home deliveries are increasing, and travel speeds are decreasing.

Amidst that congestion, traffic fatalities are up about 14% compared to 2018, according to traffic data from the Department of Transportation. Vehicle deaths are up 32%, pedestrian deaths are up 11%, and cyclist deaths are up 150%.

In a statement, the New York City Department of Transportation outlined how it is responding to the recent deaths. A spokesperson said the department was "stepping up street redesigns with pedestrian safety enhancements," and also building safer connections for bikers, which include protected bike lanes.

"You know, we all have to be able to live and work together," said New York City Police Department Chief of Department Terence Monahan. "A lot of the enforcement will go on vehicles, but we can't ignore the bicyclists. As much as we want our cars to be respectful of the bicyclists on the road, as a bicyclist, exercise some caution for yourself."

Eyewitness News examined incident summaries from the NYPD detailing the 25 cyclist fatality accidents through October. We also asked police in what cases they had determined who was at fault and whether charges were filed.

In about one out of every four incidents, report summaries also mentioned that cyclists had disregarded traffic signals.

This data is based on several ongoing investigations and could change.

"The problem is we have an epidemic of traffic violence in New York City," said cycling advocate, Marco Conner, Co-Deputy Director Transportation Alternatives. "Cyclists and everyone on the streets need to travel safely. There is no doubt about that, but it's important to keep in mind that shouldn't in any way take away from the need to make our streets safe."

Speaking before the City Council vote, Speaker Corey Johnson called it, "the right thing to do."

"This is about saving countless future lives," Johnson said. "So many of these fatalities and injuries are preventable. They are preventable by changing the way we prioritize our streets."

Critics of the plan worry the changes will increase traffic.