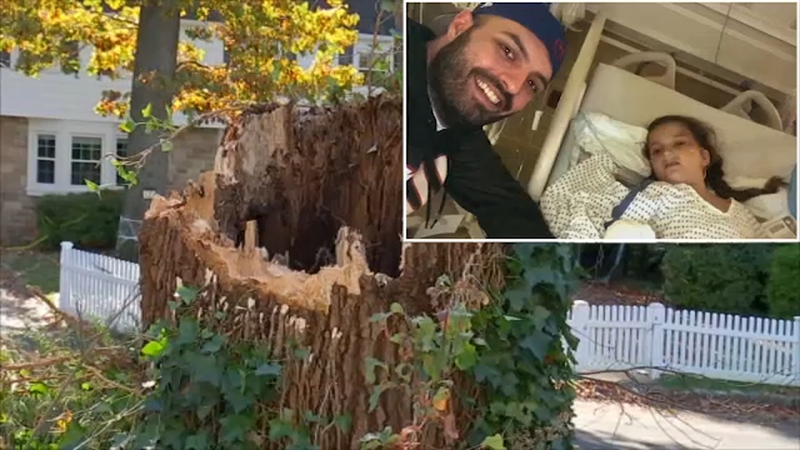 NEW YORK (WABC) -- Severe weather pummeled the Tri-State leaving a lot of damage in its wake: including the death of a driver upstate, the injury of a little girl who was out trick-or-treating and downed trees and power lines across the state.

The 9-year-old girl was struck by a large tree limb on Maywood Road in New Rochelle around 6:30 p.m. Thursday. She was taken to Jacobi Medical Center with multiple fractures.

City leaders say they have been warning Con Ed about the tree for weeks, and they say the utility had the necessary permits to remove the top portion that encroached on power lines.
Con Ed released a statement saying, "Our hearts go out to the young girl and her family. We are in contact with officials of the city of New Rochelle to review the matter."

Gov. Andrew Cuomo declared a state of emergency for 11 counties after storms wreaked havoc across the state and led to the closure of 94 state roads.

At least one death has been reported after the body of a motorist was discovered Friday after he apparently went through a road block, got out of his car and was swept away by floodwaters in Herkimer County.

Cuomo said the overnight storms were much worse in many parts of the state then many anticipated.

Meantime, more than 130,000 were left without power from New Jersey to Long Island at the height of the outages.
EMBED More News Videos

NJ Burkett has the latest on storm damage on Long Island.

"All of a sudden I heard like a screech and a boom. A hard bang. So, I was assuming it was a crash. So, when I looked out the window I just saw debris on the floor and then when I came across the street I saw this hanging right here," said Steve Rodriguez, a resident.

Part of the roof landed in the power lines.

The wind knocked down trees that damaged cars on the road at Midwood and Nostrand in Prospect, Gardens, Brooklyn.

In Ozone Park, a tree came down on a house causing a neighborhood blackout. One of more than 90 throughout the city.

The homeowner was inside with their family.

"I didn't think it was that serious, I didn't think the winds were that strong, until I saw the tree. And now I understand that it was more serious than people anticipated. So I'm just glad that none of the children got hurt, everyone trick or treated, they're home safe," the resident said.
EMBED More News Videos

Rob Nelson reports on the storm damage in Brooklyn.

On Long Island, a massive tree uprooted and fell onto a home on Vespucci Avenue in Copiague.

Homeowners were inside at the time of a tree fell onto a home in Commack, fortunately, they were not hurt.

In Madison, New Jersey, officials issued a local State of Emergency due to all of the downed trees and powerlines. The Department of Public Works, electric department, fire department and police were all out in force working to clean up the damage.

Darla Miles reports on the storm damage in New Jersey.