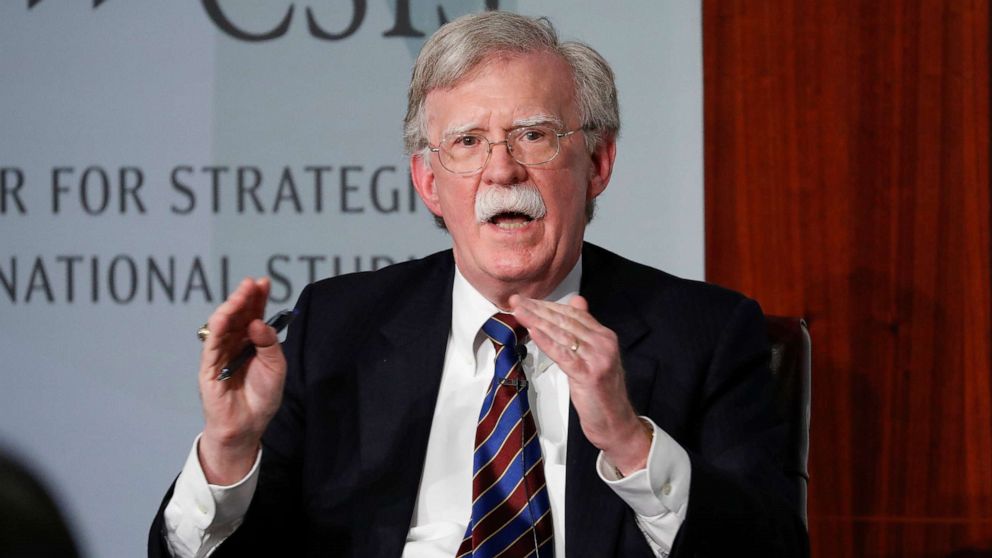 ABCNews
By BOBBY GEHLEN
After a more than two-month hiatus from Twitter, President Donald Trump's former national security adviser John Bolton is back on the platform with a cryptic message amid the impeachment probe.

"Glad to be back on Twitter after more than two months. For the backstory, stay tuned........" he Tweeted on Friday.

He later tweeted, "since resigning as National Security Advisor, the @WhiteHouse refused to return access to my personal Twitter account. Out of fear of what I may say? To those who speculated I went into hiding, I'm sorry to disappoint!"

A senior administration official tells ABC News, "The White House did not block Mr. Bolton from accessing his personal Twitter account, and wouldn't have the technical means to do so."

Hours after the president's interview on Fox, Bolton tweeted again writing, "We have now liberated the Twitter account, previously suppressed unfairly in the aftermath of my resignation as National Security Advisor. More to come....."

Bolton, who abruptly resigned from his White House position in September, has been mentioned throughout the impeachment inquiry process as someone opposed to President Trump's pressure campaign against Ukraine.

His return to Twitter comes a day after the explosive testimony from Fiona Hill, the former senior director for Europe and Russia on the White House's National Security Council, who reported to Bolton.

Hill testified on Thursday that Bolton told her to report to the NSC's chief lawyer what U.S. Ambassador to the European Union Gordon Sondland and President Trump's personal lawyer Rudy Guliani, were doing to pressure Ukraine. Bolton directed her, Hill said, to relay the message that he was opposed to "whatever drug deal" Sondland and acting White House chief of staff Mick Mulvaney were "cooking up."

Bolton has been formally requested to testify before House investigators but his legal team says he will not appear voluntarily. "I stand ready at all times to accept service of a subpoena on his behalf," his lawyer, Charles Cooper, told ABC News. House Democrats decided not to subpoena him to avoid a lengthy court fight.

At the same time, Cooper recently sent a letter to House Democrats claiming that Bolton has firsthand knowledge of White House meetings related to Ukraine. The letter states that Bolton "...was personally involved in many of the events, meetings, and conversations about which you have already received testimony, as well as many relevant meetings and conversations that have not yet been discussed in testimonies thus far."