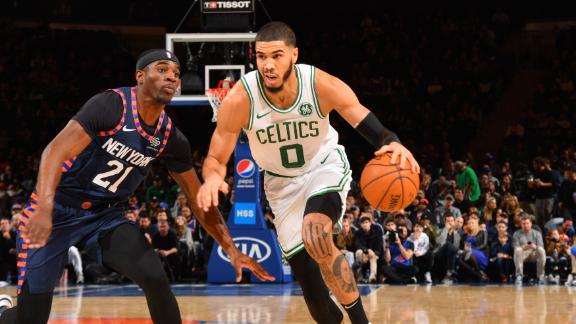 NEW YORK -- The Celtics usually beat the Knicks. The Knicks often blow big leads. So there was little reason for Boston to panic when trailing by nine points in the third quarter.

Julius Randle led the Knicks with 26 points. Dennis Smith Jr. scored 17 and RJ Barrett had 16 for New York, which blew a 16-point lead to the 76ers on Friday and has lost six straight.

Kevin Knox's long jumper put the Knicks ahead 72-63 with 7:20 left in the period, their biggest lead of the game.

"I don't know if we got down," Walker said. "If there is one thing we're going to do it's to stay positive with each other. We stuck with it. We stayed together. There's going to be more games like this. It's a long year."

The Knicks were still up 93-87 in the fourth, but the Celtics went on a 17-2 run to take the lead for good. Semi Ojeleye's 3-pointer tied the score at 95-95, Brown followed with a steal and layup, Tatum hit a free throw, and Walker and Tatum hit consecutive 3-pointers to cap the run.

"At the start of the game we didn't come out with the stuff," Celtics coach Brad Stevens said. "But it's good that we can turn it to that level, and we had a couple of great ball pressure plays there at the end of the game that helped us create some separating. But I don't think we can keep going into games and giving up 85 points with 10 minutes to go and expect to be successful."

"Tonight it was turnovers. Our turnovers sparked them," Knicks coach David Fizdale said. "We had four straight turnovers and they capitalized on every one of them. When you have a lead, you gotta get shots on goal."

The score was tied 58-58 at halftime after a back-and-forth first two quarters.

"There's two halves to a game," Brown said. "We didn't play as well as we wanted to play but it was tied at halftime. We came out in the second half, especially in the fourth quarter, and lifted our energy a bit to pull out the win."

Knox finished with 11 points and Damyean Dotson added 10 for the Knicks.

Celtics: Other than a 14-point loss to the Philadelphia 76ers in the season opener, every other Boston defeat this season has been by five points or less. ... The Celtics lead the all-time series against the Knicks 296-182, including a 160-64 advantage in New York.

Knicks: New York has lost five straight to Boston. The Knicks have not beaten the Celtics since Nov. 21, 2018, and have not defeated them at Madison Square Garden since Dec. 21, 2017. The Knicks are 0-8 against Atlantic Division opponents this season.

Tatum is the only Celtic to start all 19 games this season. Only Randle has started all 20 games for the Knicks, who have featured 11 different starters thus far. Nine different Boston players have gotten at least one start. New York's Marcus Morris had started the first 19 but missed Sunday's game with cervical spasms.

Walker was the first Celtics player to reach double-digit assists this season. No one has recorded 10 dimes for the Knicks, with Barrett and Frank Ntilikina topping out at nine.

Knicks: At Milwaukee on Monday.