Dozens killed after bus plunges off cliff in Tunisia 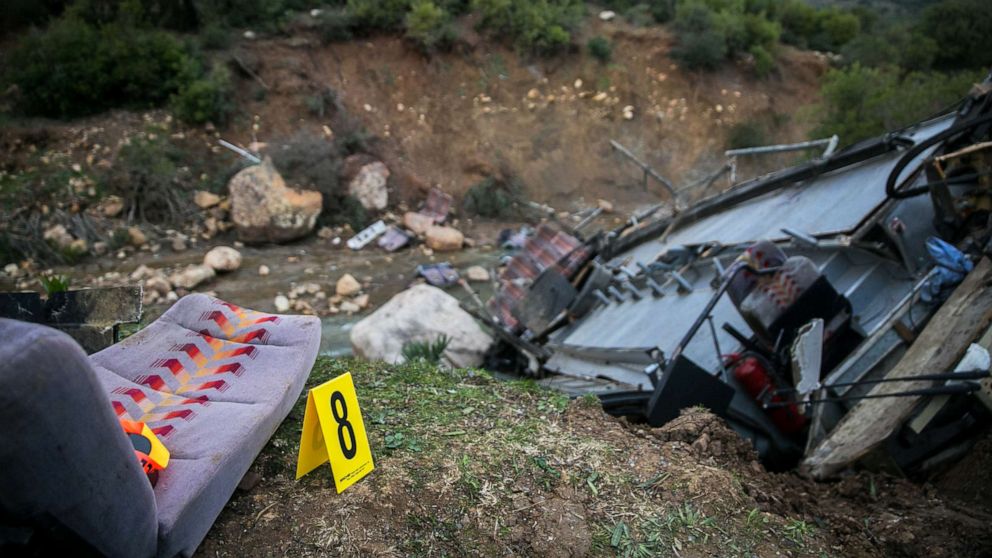 ABCNews
By MORGAN WINSOR
LONDON -- At least 24 people were killed when their tour bus crashed in Tunisia on Sunday, officials said.

The bus had left the capital, Tunis, that morning with 43 people on board and was headed to the northern mountain town of Ain Draham, a popular destination for Tunisian tourists, according to a statement from Tunisia's Ministry of Interior.

The vehicle, which was operated by a private travel agency, was driving through the Ain Snoussi region when it apparently careened off a twisty road during a sharp turn, smashing through an iron barrier and plunging off a cliff into a ravine near the northern town of Amdoun, about 75 miles west of Tunis, the interior ministry said.

In addition to those who died, another 18 people were injured and rushed to local hospitals, according to a statement from Tunisia's Ministry of Public Health.

The cause of the crash is under investigation. It's believed to be one of the worst road accidents on record in the North African nation.

Tunisian President Kais Saied and Prime Minister Youssef Chahed both visited the crash site Sunday. The president pledged to improve the region's roads and said anyone who was responsible for the poor conditions would be held accountable, according to state-run news agency TAP news.

Tunisia's rundown roads and infrastructure have been blamed for the high number of traffic accidents in recent years. A 2015 report released by the World Health Organization showed that Tunisia had one of the worst traffic death rates per capita in North Africa, second only to Libya.
Report a correction or typo
Related topics:
abc newsnational
Copyright © 2020 ABC News Internet Ventures.
More Videos
From CNN Newsource affiliates
TOP STORIES