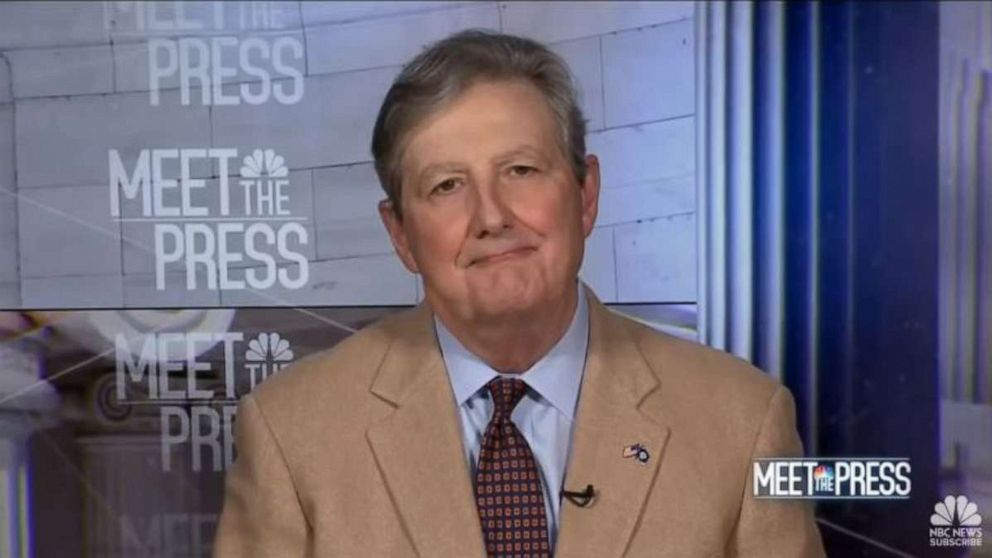 GOP Sen. John Kennedy was taking heat on Monday, including from Hillary Clinton, for doubling down on his assertion that both Russia and Ukraine interfered in the 2016 presidential election, this despite the U.S. intelligence community's clear assessment that Russia was responsible.

"I think both Russia and Ukraine meddled in the 2016 election," Kennedy told NBC's Meet the Press on Sunday.

"I think it's been well documented in the Financial Times, in Politico, in the Economist, in the Washington Examiner, even on CBS, that the prime minister of Ukraine, the interior minister, the Ukrainian ambassador to the United States, the head of the Ukrainian Anti-Corruption League, all meddled in the election on social media and otherwise," Kennedy said.

"The fact that Russia was so aggressive does not exclude the fact that President Poroshenko actively worked for Secretary Clinton," the Louisiana Republican added.

NBC's Chuck Todd pressed Kennedy during the Sunday television interview, asking the senator if he had been "duped" by Russian propaganda, adding that U.S. intelligence officials had reportedly briefed senators in recent weeks about Russia's campaign to frame Ukraine.

Kennedy responded that he did not attend the briefing.

"Let me be clear, the charge that Ukraine had something to do with the Russian meddling in 2016 is a lie spread by Vladimir Putin. To get things off his back. Putin and Russian intelligence services invented that lie to muddy the waters and distract from the fact that Russia, not Ukraine, interfered in our elections," Schumer said on the Senate floor Monday.

"And now, disgracefully, we have sitting U.S. senators helping spread that propaganda, in an effort to defend the president," Schumer said. "Republicans must stop claiming that Ukraine had anything to do with election Interference in 2016. Repeating these claims, even speculating about them, is doing Putin's job for him. I urge my Republican colleagues, they know who they are, to stop spreading these lies which hurts our democracy."

Last week, Kennedy similarly suggested that there was still a possibility that Ukraine was responsible for the hacking of Democratic National Committee emails in 2016.

He later walked those comments back, claiming he had misheard the question during an interview.

Despite Kennedy's most recent claim, there is no evidence that suggests the Ukraine government aided Clinton in 2016.

"Sen. Kennedy, why are you parroting Russian propaganda that U.S. intelligence officials tell us are designed to divide our country? Did you miss the briefing that day?" Clinton tweeted on Monday.

The White House's former top Russia expert Fiona Hill, who testified before the House Intelligence Committee last month as part of the House impeachment inquiry, said that the theory that Ukraine interfered in the 2016 election is "a fictional narrative that is being perpetrated and propagated by the Russian security services themselves."

Kennedy later responded to Clinton, telling the former Democratic nominee: "Bless your heart, Madame Secretary. I hope you are well."

On Monday, Trump tweeted his thanks to Kennedy for his performance during the interview.