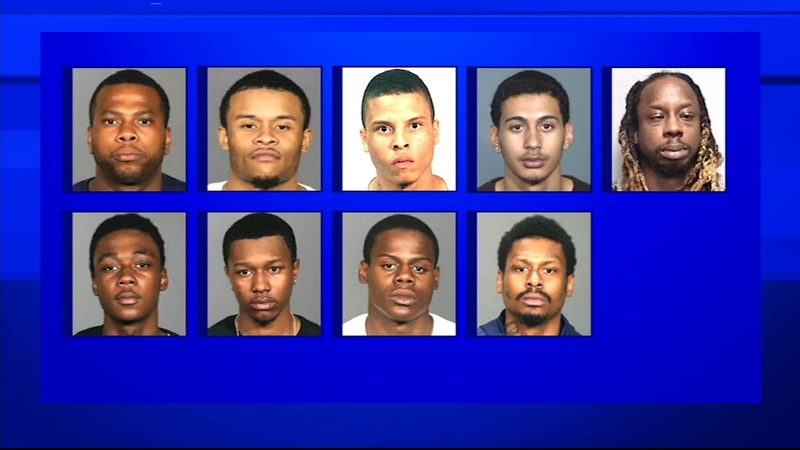 BEDFORD STUYVESANT, Brooklyn (WABC) -- As part of an ongoing effort to crack down on gang and gun violence, police have made arrests in connection with two unsolved murders in Brooklyn that happened back in 2017 and 2018.

Khadu is also charged with the April 2018 killing of Claudell Gary, a 37-year-old rival member, on Hart Street, with the help of two others. The victim was found shot in the neck and leg in front of the Mt. Zion Pentecostal Church.

"These purported acts of violence were generally committed in crowded, neighborhood streets, and again, that's the essence of what we're talking about here, the danger to the public," said Inspector Richard Green with the NYPD Gun Violence Task Force.

Police say the Brick Squad gang, an extension of The Bloods, peddled drugs from Brooklyn to Maine and Binghampton and committed robberies for the commissary accounts of their incarcerated ring leaders, including Howard Smith, known as the Godfather, who is currently serving a life sentence.

"And it is one of the most disturbing aspects of this case, is that, that they're committing dangerous crimes, and they're hurting our communities while they're still incarcerated," said Brooklyn District Attorney Eric Gonzalez.

Gang-related violence has been blamed for an increase in murders in Brooklyn where police believe a small number of people linked to street gangs appear to be responsible.

The 10 people in custody are charged with narcotics and weapons possession. Five of them are facing murder charges and facing 25 years to life in prison.
----------
* More Brooklyn news
* Send us a news tip
* Download the abc7NY app for breaking news alerts
* Follow us on YouTube
Report a correction or typo
Related topics:
bedford stuyvesantbrooklynnew york cityarrestmurdergang violence
Copyright © 2021 WABC-TV. All Rights Reserved.
More Videos
From CNN Newsource affiliates
TOP STORIES