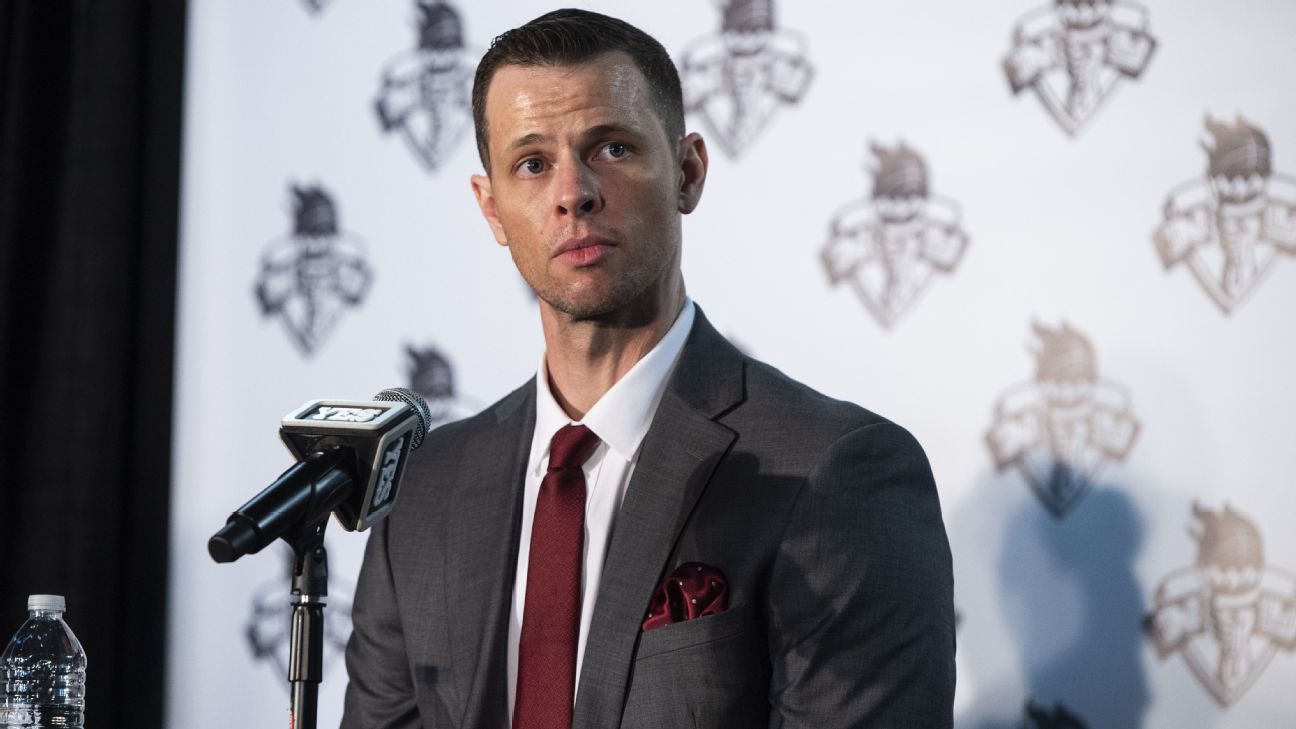 Hopkins enters a situation quite different than his Liberty predecessor, former WNBA player Katie Smith. During her two seasons coaching the Liberty, they played in the small and somewhat remote (to downtown New York City) Westchester County Center in White Plains. It was announced in October that the Liberty would play at Barclays Center in Brooklyn starting in the 2020 season, a huge step for the team.

And the franchise was up for sale from November 2017 until being purchased by Brooklyn Nets owner Joseph Tsai in January 2019. Hopkins will coach a Liberty franchise with more stability than in its waning years with Madison Square Garden Co. But it's also a team that has missed the postseason the past two years and has won just one playoff series in the past nine years.

Here are some key questions in the wake of Hopkins' hiring:

1. Is Sabrina Ionescu still the No. 1 pick, and how will she mesh with Hopkins?

Neither Hopkins nor Liberty general manager Jonathan Kolb spoke in anything but generalities Wednesday about having the No. 1 pick in April's draft. They said the standard things about doing their due diligence. But it's going to be surprising if Oregon guard Sabrina Ionescu isn't the choice.

She's averaging 15.6 points, 9.0 rebounds and 8.8 assists for the No. 2 team in the country, and she has 21 triple-doubles in her college career. Ionescu also would seem to be the right fit for what Hopkins speaks about valuing most strategically: putting people in position to best take advantage of what they do well. Ionescu, who has 907 assists at Oregon, is known for doing just that.

And she moves the needle, as the saying goes, in regard to popularity and recognizability. That's important for any franchise, but it could be a big boost for the WNBA to have her in New York.

2. What does this mean for Tina Charles?

Hopkins hasn't been a head coach before -- save for with a high school junior varsity team -- but the strengths he's known for are player development, analytics and relationship-building.

All three could be important in working with Charles, the Liberty's cornerstone player who is a free agent. Kolb couldn't address that issue yet, either, but if Charles returns to her hometown Liberty as expected, she'll be looking to come back from the worst shooting season of her career.

Charles is a 10-season WNBA veteran who's been extremely durable and is a former league MVP (2012). So does Hopkins' background in player development really apply to her? Yes, if he has a working relationship with her similar to what he had with other veterans such as Maya Moore and Lindsay Whalen while he was an assistant with the Minnesota Lynx.

"It's a different approach with veterans," Hopkins said, contrasting what he did with the Lynx vs. his time with Tulsa (now the Dallas Wings), which was more with younger players. "You're not molding a player to find their place in the league, but finding ways to make them better at what they're already great at."

One question might be how many 3-pointers should Charles take. Her first six WNBA seasons, she took 17 combined. The past four, she has taken 272, making 83 (30.5%). Hopkins anticipates surrounding Charles with strong 3-point shooters, which ideally gives her more freedom to work close to the basket in one-on-one situations.

3. How will Hopkins be accepted by Liberty fans?

The Liberty are one of the WNBA's original eight franchises, and some fans have been with them from the beginning.

But Barclays will be the fourth different venue the team has called home in the past decade. Along with their original home, Madison Square Garden, they also played three seasons at the Prudential Center in Newark, New Jersey, during MSG renovations. The Liberty fans want this to be the last stop for the foreseeable future.

They are looking for the same kind of loyalty and commitment from ownership that they've given the team: a feeling that they're valued, and they're in it together -- something they rarely felt under MSG ownership and James Dolan.

Hopkins' accessibility as a head coach will help with that. He referenced his father being a Brooklyn native, saying he thinks he will feel at home there.

"The desire to connect is mutual," Hopkins said. "I'm definitely a relationship person by nature. I'm a social person, I'm extroverted. Getting out in the community is not only important to the franchise, it's important to me. I want to get know the people around here."

Durr, a guard out of Louisville, started 15 of 18 games in her rookie season with the Liberty, averaging 9.7 points and 1.7 assists. But she missed 16 games dealing with a groin injury. She had hip arthroscopy with a labral repair procedure on Sept. 18. Provided Durr is healthy for 2020, what does Hopkins see for her?

"I have really high hopes for Asia," Hopkins said. "I think she fits what I want to do, and how I want to play with this group. She can put it on the floor, and she's really efficient around the rim. She doesn't need to be a high-volume player to be effective and make her mark on the game."

5. Does the WNBA have some diversity concerns?

The two coaching openings in the offseason were in New York and Indiana (Marianne Stanley replaced Pokey Chatman). In both cases, the jobs went to WNBA assistants. But it means there are no black women in any of the head-coaching positions, and just four women overall to eight men. There are two black men as WNBA head coaches: Los Angeles' Derek Fisher and Chicago's James Wade.

Kolb said the Liberty had an extensive search that included both pro and college candidates, men and women. He did not say exactly how many candidates the Liberty interviewed, but he put it at "over 20 people."

"We needed someone who has coached women, that relates to them, that knows how to motivate and that has worked with elite-level athletes and can train them," Kolb said. "The more we kept looking at that, the more Walt's name made sense.

"In terms of women in sports, I think this is an exciting time. I understand the head-coaching position is very public, but there are ways right now we can make changes to that. Which is our basketball operations staff. Are women in equipment, are they in analytics, are they in management roles? There are things that we're looking at to help augment, and I think we can be at the forefront there."

The answer pretty much sidesteps the question, though. Were there no female candidates -- particularly black women -- who could have filled this role as well as Hopkins? And is the league as a whole concerned about anything with its head-coaching demographics?
Report a correction or typo
Related topics:
sportsespnwnbanew york libertyoregon duckstina charlesasia durrsabrina ionescuespnw sportsespnw
Copyright © 2021 ESPN Internet Ventures. All rights reserved.
TOP STORIES
Reward offered after beloved 91-year-old found dead in shed
Masks will be required for NJ students K-12, Murphy to announce
Murder investigation after lawyer found dead in NYC office
Hospitals gearing up for possible surge of pediatric COVID patients
Eyewitness News evening update
Brooklyn hospital renamed in honor of Ruth Bader Ginsburg
29-year-old man shot in chest, arm while standing outside in Queens
Show More
Where is my tax refund? Why they're still delayed
Cow Parade back in NYC after more than 20 years
43-year-old charged after 2 innocent people shot on bus in NYC
How long can Cuomo last without resigning or getting impeached?
Adoptive father now watching his son compete in Tokyo Olympics
More TOP STORIES News