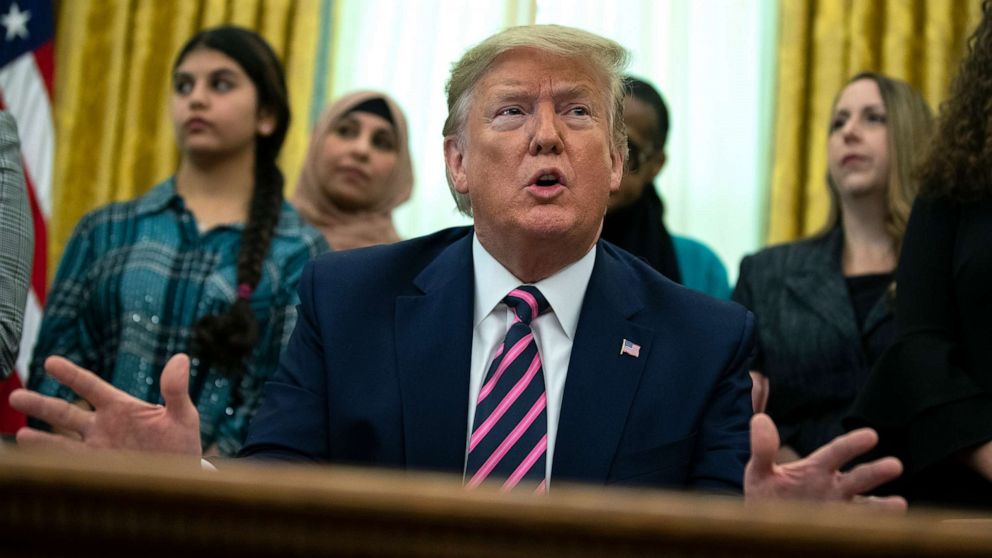 The president -- as he looks to gain more support from evangelical Christians, typically one of his most loyal constituencies -- is also taking steps to make it easier for religious organizations to gain access to federal programs.

"We will not let anyone push God from the public square," Trump said Thursday afternoon, speaking from the Oval Office on National Religious Freedom Day -- where he welcomed students from Christian, Jewish and Muslim backgrounds. "We will uphold religious liberty for all and I want to thank you all."

Trump said the directive is a way for the administration to "safeguard" students' religious freedom rights.

"We call this the right to pray," he said, adding "there is nothing more important than that I would say."

But it didn't stop with students, the Office of Management and Budget followed suit released a memo of outlining an executive order from the president requiring federal agencies to establish grant-making processes that comply with First Amendment protections.

Nine agencies are also set to release proposed rules to ensure religious and non-religious organizations are treated equally by the federal government.

The Trump administration's guidance will also give students and parents the platform to make complaints about religious discrimination to state education departments, according to administration officials.

In amplifying the president's message, the Department of Education is set to send a letter to state education secretaries reminding them of students' protected First Amendment religious rights.

"Too many misinterpret a separation of church and state as an invitation for government to separate people from their faith," Education Secretary Betsy DeVos said. "In reality our Constitution doesn't exist to protect us from religion, it exist to protect religion from government."

Speaking at a Miami church in early January, Trump hinted that the action would be made official today -- Jan. 16.

"Very soon, I'll be taking action to safeguard students and teachers' First Amendment rights to pray in our schools," Trump said Thursday morning. "They want to take that right along with many other ones."

The guidance had not been updated since 2003.

An administration official pointed to the case of a group of middle school students in Texas who were repeatedly told not to pray in their school cafeteria during lunch break by the school principal, to highlight why the update is needed. The decision was later reversed by school district officials.

"President Trump is committed to making sure that people of faith, particularly children, are not subjected to illegal punishment or pressure for exercising their constitutionally protected rights," Grogan, the White House director of the Domestic Policy Council, said in a call to reporters.

Americans United for Separation of Church and State (AU), a group known for its advocacy to ensure that "religion does not dictate public policy," shot down Trump's plan in a series of tweets -- claiming it was only catering to "religious extremists."

Rob Boston, AU's senior adviser, shot back at Trump after he first announced his plans to issue new guidance.

"Any guidelines this administration produces will likely either be littered with twisted interpretations of the law or, even if they are accurate, Trump will start boasting that he 'brought prayer back to schools' or some such nonsense," Boston wrote in a Jan. 6 editorial on the group's website.

He added, "If [the] Trump administration offers misleading advice on religion and public schools, we'll be there to set the record straight and ensure our public schools remain inclusive and welcoming for all students, regardless of their religious or nonreligious beliefs."

The group's leaders said in a different series of tweets that they would be "analyzing these regs now."

The American Civil Liberties Union released a statement of critique following the event.

"Government-funded programs, including those operated by faith-based organizations, should not be able to discriminate against vulnerable people seeking help," Heather Weaver, senior staff attorney with the ACLU Program on Freedom of Religion and Belief, said in the statement. "We will submit comments vigorously opposing these proposed regulations."

This presidential action comes as Trump also seeks to shore up support among the nation's evangelical Christians after the prominent "Christianity Today" ran an op-ed advocating for the president's removal from office.

The president's reelection campaign announced the formation of an "Evangelicals for Trump" coalition at a Florida rally earlier this month.

"Well, it is a cultural war. And you have two sides ... you have a side that believes so strongly in prayer and then being restricted and it's getting worse and worse and I think we've made a big impact," Trump said on Thursday. "And we are loosening up a lot ... I want to loosen it up totally."