KABC
By ABC7.com staff
LOS ANGELES -- Kirk Douglas, the screen legend who starred in "Spartacus" and countless other Hollywood classics, has died at age 103, his son Michael announced Wednesday.

Douglas was nominated for three Academy Awards during his decades-long career, appeared in more than 80 films and later received an honorary Oscar for his decades of service to the movie industry.

His son, actor Michael Douglas, posted a tribute to his father on Instagram:

It is with tremendous sadness that my brothers and I announce that Kirk Douglas left us today at the age of 103. To the world he was a legend, an actor from the golden age of movies who lived well into his golden years, a humanitarian whose commitment to justice and the causes he believed in set a standard for all of us to aspire to.
But to me and my brothers Joel and Peter he was simply Dad, to Catherine, a wonderful father-in-law, to his grandchildren and great grandchild their loving grandfather, and to his wife Anne, a wonderful husband.

Kirk's life was well lived, and he leaves a legacy in film that will endure for generations to come, and a history as a renowned philanthropist who worked to aid the public and bring peace to the planet.

Let me end with the words I told him on his last birthday and which will always remain true. Dad- I love you so much and I am so proud to be your son. #KirkDouglas

Kirk Douglas was born Issur Danielovitch in New York in 1916, the son of Jewish immigrants from Russia.

He broke into Hollywood in the 1940s, developing into a major leading man by the 1950s. His Oscar nominations were for the films "Champion," "Bad & the Beautiful" and "Lust for Life."

But the role which he is best known for was "Spartacus," the 1960 epic about a slave rebellion during ancient Rome with its oft-quoted line "I am Spartacus."

Still, he said the film he was most fond of was the 1962 Western "Lonely are the Brave."

In an interview with KABC around the time of his 100th birthday, Douglas reflected on his life and longevity. He had suffered a stroke a decade before, limiting his ability to speak, but expressed himself with simple eloquence.

Douglas grew up poor but Hollywood helped make him quite wealthy. He never forgot his modest upbringing.

In the Los Angeles area, Douglas and his wife Anne were known as philanthropists, providing millions of dollars for hundreds of playgrounds across the region, as well as scholarships, theater, homeless shelters, children's health programs and other causes.

"When you have been born poor, you have sympathy to help other people," he said. "So I have given all my money away. I want to go out of this world the way I came in, with nothing."

Anne, who is 100 years old, was beside him when he died, according to family members.

In the interview, he was asked if he ever thought about acting again.

"Everything makes me want to act again," Douglas replied. "But now I look around lying in my bed and I see all my scripts across the room. Ninety movies - that's enough." 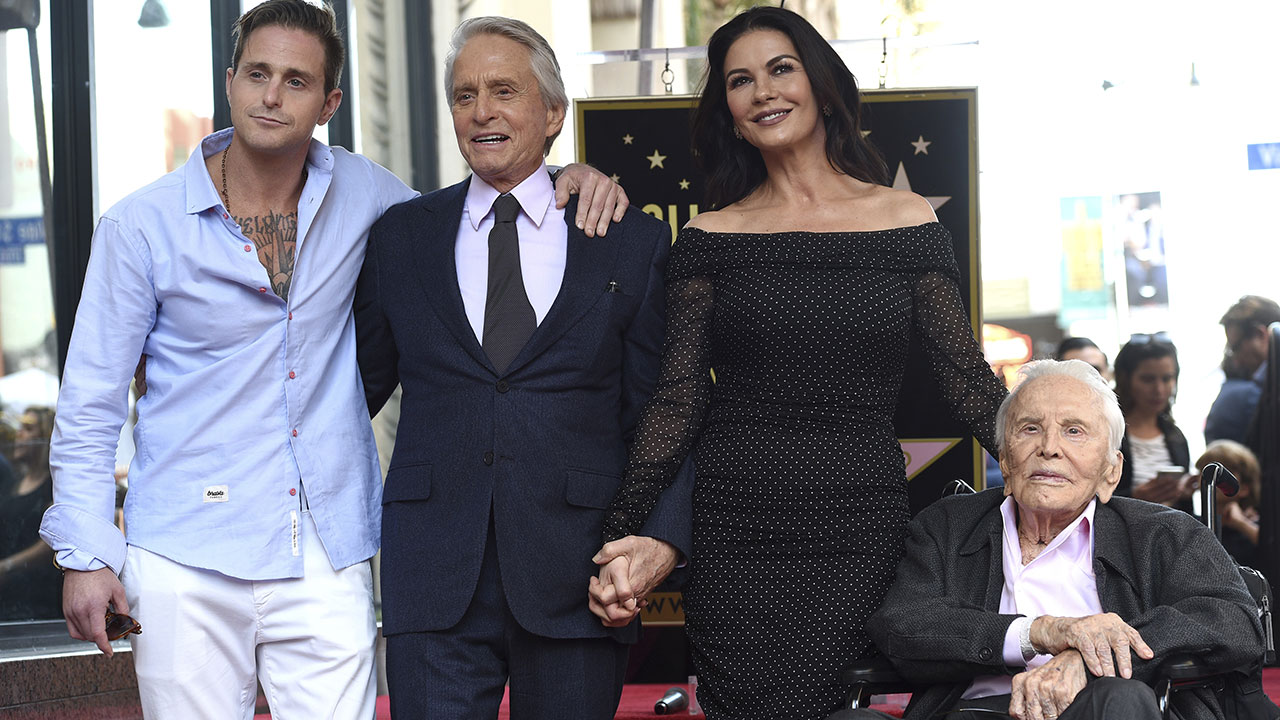 In addition to his onscreen appearances, Douglas was known for standing up for others in the era of the Hollywood blacklist, when the careers of many screenwriters were ruined if they were suspected of being Communist sympathizers. Douglas made a symbolic blow against the blacklist when he openly credited Dalton Trumbo, a blacklisted Oscar winner and former Communist, for helping write the script for "Spartacus."

Besides the Oscars, Douglas had been honored with multiple awards and nominations, including a star on the Hollywood Walk of Fame, Golden Globe Lifetime Achievement award and three Emmy nominations.

He was also awarded the Presidential Medal of Freedom by President Jimmy Carter in 1981.

KIrk Douglas will always be an icon in the pantheon of Hollywood. He put himself on the line to break the blacklist. My love goes out to my friend Michael and the whole family.

“I wanted to be an actor ever since I was a kid in the second grade. I did a play, and my mother made a black apron, and I played a shoemaker. After the performance, [my father] gave me my first Oscar: an ice cream cone.” -Kirk Douglas

Goodbye to a Hollywood legend. pic.twitter.com/vnu1Hkb2FA