6 hurt when car jumps curb, crashes into deli in Chelsea 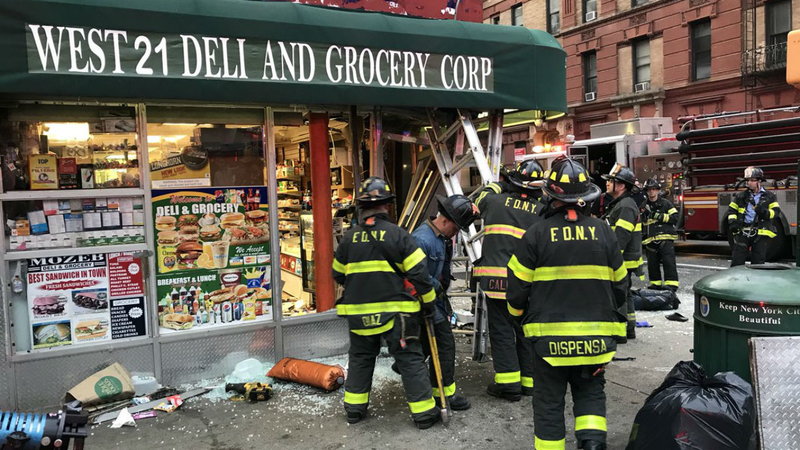 CHELSEA, Manhattan (WABC) -- Authorities say six people were hurt when a car jumped a curb and crashed into a deli in Chelsea Thursday night.

The accident happened just before 7:30 p.m. at West 21st Street and Eighth Avenue.

The injured were all taken to Bellevue Hospital. The injuries are not considered life-threatening.

Three pedestrians on the sidewalk were hurt, along with two deli employees and the driver.

Police are investigating the cause of the crash. Witnesses said the car, a for-hire cab, collided with a yellow cab heading up Eighth Avenue before slamming into the deli.

BREAKING: this is the yellow cab witnesses say that other TLC vehicle crashed into before slamming into the deli on 21st and 8th Ave. Witnesses say several injured. pic.twitter.com/8bu7c6rlQa

Yellow streak marks on the side of his vehicle indicated he was T-boned.

"I was just waiting by the counter putting my products up there and the next thing I hear POW and heard people screaming and turned towards the door, and I just saw this car coming maybe like 20-30 mph," one customer said.

One man said he saw his life flash before his eyes.

"My quick instinct was just to run to the back of the store," he said. "I just knew I was dead just the way the speed was going. Thank God the pole was there to stop the car right there."

He said the impact sent the ATM and refrigerators flying, which then injured his elderly friend.

Both drivers remained at the scene.

"It could have been, we don't know yet, a red light that was run because it looks like there was a collision that happened in the intersection which pushed the non-yellow cab onto the sidewalk," said City Council Speaker Corey Johnson.

The Department of Buildings responded to evaluate the stability of the building and said it was safe.