AP
By MICHAEL BALSAMO
WASHINGTON -- Dr. Anthony Fauci, the country's top infectious disease expert, owns up to doing some not-so-smart things as he helps lead the White House effort to stem the spread of the new coronavirus. Things like forgetting to eat and not getting enough sleep.

The blunt-speaking Fauci also has had to contend with a deluge of online threats and uncomfortable personal encounters with admirers as the pandemic consumes his every waking hour. Nevertheless, the 79-year-old epidemiologist insists he's doing just fine.

"I've chosen this life. I mean I know what it is," Fauci said Thursday on NBC's "Today" show. "There are things about it that are sometimes disturbing. But you just focus on the job you have to do, and just put all that stuff aside and try as best as possible not to pay attention to it."

Still, concerns about his safety are serious enough that Fauci now has security. The Department of Health and Human Services requested the U.S. Marshals Service authorize special agents from the HHS inspector general's office as part of Fauci's protection, according to a person familiar with the arrangements.

The Justice Department approved a request to deputize nine agents, the person said, speaking on condition of anonymity because there has been no official announcement.

Fauci, who has advised every U.S. president on public health issues dating back to Ronald Reagan, has been put on a pedestal by Trump critics. They see him and, to a lesser degree, White House coronavirus task force coordinator Dr. Deborah Birx, as the voices of science who used cold data to steer Trump away from opening up the economy by Easter Sunday.

At the same time, Fauci has been vilified by some conspiracy peddlers on the far right as a part of the anti-Trump deep state. Conservative media commentators like Fox Business host Lou Dobbs and talk show host Rush Limbaugh have viewed Fauci with suspicion as the plain-speaking Fauci hasn't shied away from publicly correcting Trump's erroneous statements about the virus.

"President Trump seems to have profound respect for both these people, so that's fine," Limbaugh said during his Monday broadcast about Fauci and Birx. "I just can't, I can't erase what I've seen from the so-called Deep State and the attempt to undermine the entire election of 2016. "

Some have accused Fauci of playing up the threat of COVID-19, while others have pointed to emails in which he praised Democrat Hillary Clinton. Still others have dismissed him as a "deep state" operative because of his 36-year leadership of the National Institute of Allergy and Infectious Diseases.

Anti-vaccine groups have blasted Fauci's long support for immunizations and accused him, without evidence, of talking up the value of a coronavirus vaccine to enrich pharmaceutical companies.

Asked during Wednesday's White House briefing about threats, Fauci demurred. But Trump jokingly chimed in that he was not overly concerned about the doctor's safety.

"He doesn't need security," Trump said. "Everybody loves him. Besides, they'd be in big trouble if they ever attacked."

Trump has shown an unusual amount of deference to Fauci in public, even as the doctor has repeatedly corrected the president on his faulty science.

Last month, as Trump continued to suggest that the virus was under control, Fauci warned Americans that the worst was yet to come.

As administration officials repeatedly assured the public that coronavirus tests were rapidly becoming available, Fauci said at a congressional hearing that the lack of widespread testing was "a failing" of the system.

And when Trump heralded a French study suggesting that hydroxychloroquine plus azithromycin, a common antibiotic, might be an effective treatment for COVID-19, Fauci reminded people that there was only "anecdotal" evidence for the idea.

At another briefing, Fauci set off Trump backers on social media when he was caught by cameras looking down and rubbing his forehead after Trump refereed to the State Department as the "Deep State Department."

Fauci has acknowledged to reporters that the cadence of the rapidly growing disaster has been exhausting. When Trump named him to the coronavirus task force, Fauci was initially getting three to four hours of sleep. Now he's trying to get at least five hours a night.

In a recent interview for CNN's Dr. Sanjay Gupta's podcast, the doctor acknowledged that his wife, Christine Grady, who heads the bioethics department at the National Institutes of Health, has been giving him sound medical advice while he's been doling out his own guidance to Trump and Americans during the crisis.

"I would go a whole day without eating anything just because I was so busy, I just didn't have time to eat," Fauci said. "And then I find that at the end of the day, I'm feeling hypoglycemic and I don't know why. And then my wife goes, 'Duh, you're hypoglycemic because you didn't eat anything.'

Fauci: Vaccinations are increasing in a 'glimmer of hope' 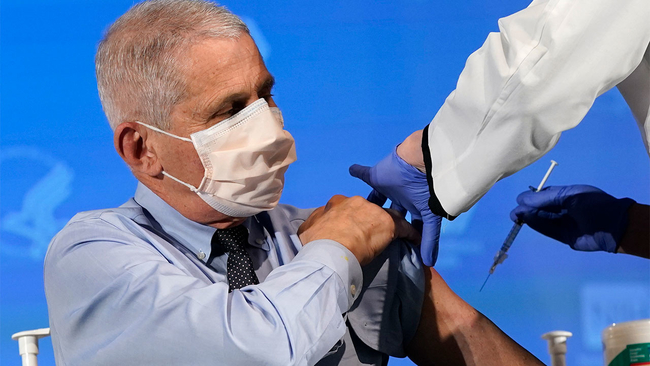 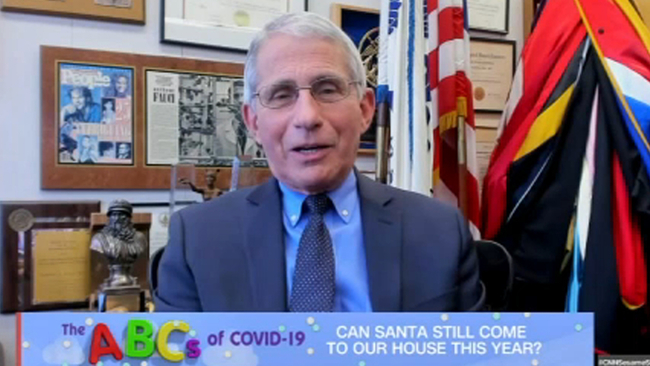 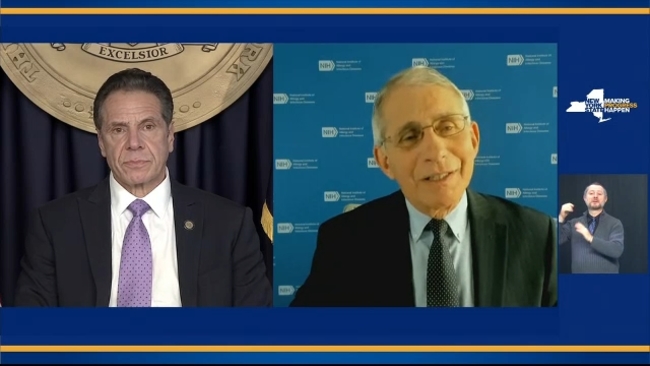