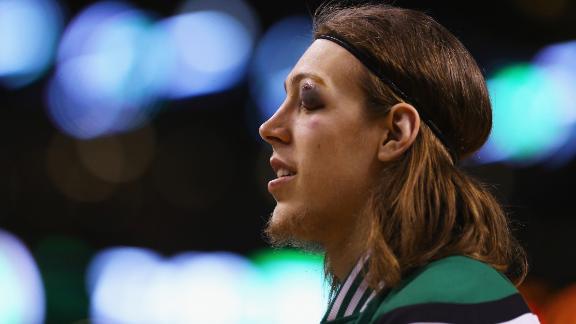 ESPN
By Joe McDonald
You probably won't be seeing the Boston Celtics' Kelly Olynyk at a Bruins game again this season.

Olynyk played with a severe eye injury Wednesday night, and in explaining postgame why he decided to play, he seemed to spill the beans on fellow Beantown athlete Dougie Hamilton.

"I remember two days ago, I was texting Dougie Hamilton, and he told me he broke his ribs and he's trying to come back before the playoffs, and I was like, man, I can't sit out, he's gonna rip me. All those hockey guys would have killed me so I had to do it," Olynyk said.

The Bruins defenseman has been sidelined since suffering an upper-body injury against the Florida Panthers on March 21. A few days after the injury, Bruins coach Claude Julien said Hamilton would be out "indefinitely" but did not disclose what the injury was.

It's standard procedure in hockey, especially at this time of the season with the playoffs quickly approaching, for teams not to reveal the extent of players' injuries for fear of opponents taking liberties if an injured player returns to action.

Olynyk scored 19 points to help lead the Celtics to a 100-87 win over the Indiana Pacersat TD Garden.