Now, law enforcement wants to know who they are to stop the mayhem.

The NYPD believes well-organized groups of agitators have infiltrated protests, moving gasoline, rocks, and bottles via bicycle and scouting locations unprotected by police for vandalism.

Communicating through encrypted apps, these small groups are scouting ahead, directing protesters to unprotected police cars to set them ablaze, and vandalizing select stores with corporate ties.

Cops say this organized group has raised money for bail and brought medical equipment with them.

The group takes those bottles and hurls them at cops while standing behind peaceful protesters, using them as human shields, and some New Yorkers have taken notice.

Deputy Commissioner John Miller said bicycle scouts move ahead of protests to determine where police are and where they were not to direct breakaway groups to commit vandalism.

"People who came to do violence in a systemic, organized fashion, that is a different reality we have to grapple with," de Blasio said.

The mayor said the feel of protests at times right now is like nothing he's ever witnessed in a city that has seen its share of civil disobedience.

Governor Cuomo also weighed in, saying "there are people who are using the protests as a cover to steal and to sow the seeds of anarchy."

We are seeing a hijacking of a legitimate protest movement. There are people who are using the protests as a cover to steal and to sow the seeds of anarchy.

They are exploiting this moment for their own purposes. We see through that.

Public Advocate Jumaane Williams believes how protests are organized should come from those effected by the injustice. And he says that's not happening.

"Very often, we are seeing people who are not from the community making decisions to do things and not to do things, and that shouldn't be," Williams said.

Federal law enforcement officials say these outsiders could be anarchists, left-wing groups like Antifa, known for their militant opposition to Fascism, or far-right groups like white supremacists.

Either way, their goal is the same -- to sow discord or inflame racial tensions.

Since Friday, police have arrested hundreds of protesters, and roughly 20% of those taken into custody Friday night live outside of the city -- including a woman who allegedly threw a Molotov cocktail at police in Brooklyn.

On Saturday, as folks gathered on Staten Island and in Harlem, officials say, once again, the anarchists showed up.

The mayor promises a full investigation into how police handled some of the protesters.

Of the 768 people arrested so far, one out of seven are not from New York City. Those out-of-towners hail from Massachusetts, Connecticut, New Jersey, Pennsylvania, Iowa, Nevada, Virginia, Maryland, Texas, even St. Paul, Minnesota.

And while the mayor welcomes those from other parts of the country, he says he will not tolerate the actions of a few. 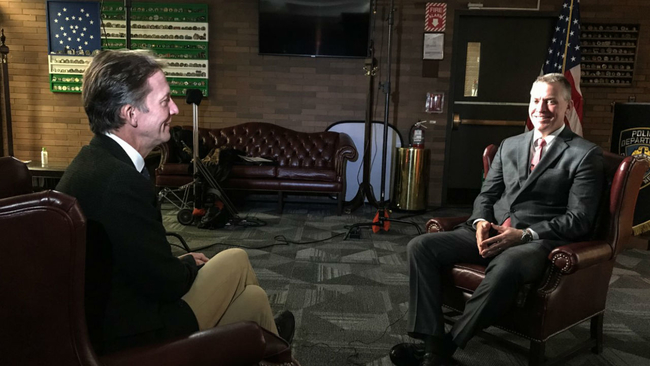