WABC
BRONX, New York City (WABC) -- A 3-year-old boy who was injured when an illegal firework launched into the window of a Bronx apartment got a special visit from police officers and firefighters.

Authorities say Adiel and his parents were watching from a sixth-floor bedroom window when the fireworks were set off in the middle of the street early Wednesday.
WATCH: Terrifying video shows moment boy is struck by fireworks
EMBED More News Videos

Police are looking for the person who set off an illegal firework that injured a 3-year-old boy watching from the window of a Bronx apartment.

One of the shells struck the window and exploded, causing a laceration to the boy's left bicep that required stitches.

"He got burned all over his arm, and they gave him at least five stitches," dad David Rosario said. "I took him to the hospital myself...(My kids) were crying all night, until we got back from the hospital." 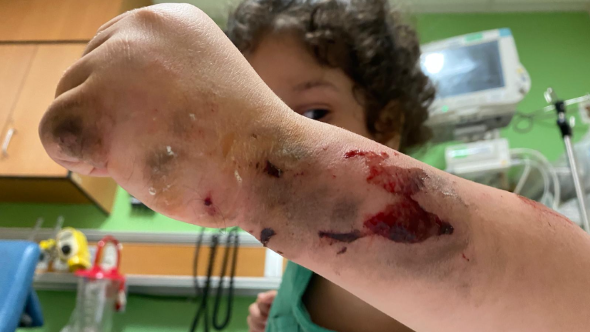 Police are looking for the person who set off the illegal firework.

New York City has been cracking down on illegal fireworks, as people shooting them off in neighborhoods across the city has been a rampant issue for several weeks.

Tim Fleischer reports cities around the nation are cracking down on illegal fireworks, which have become an increasing problem with people cooped up at home during the coronavirus pandemic.