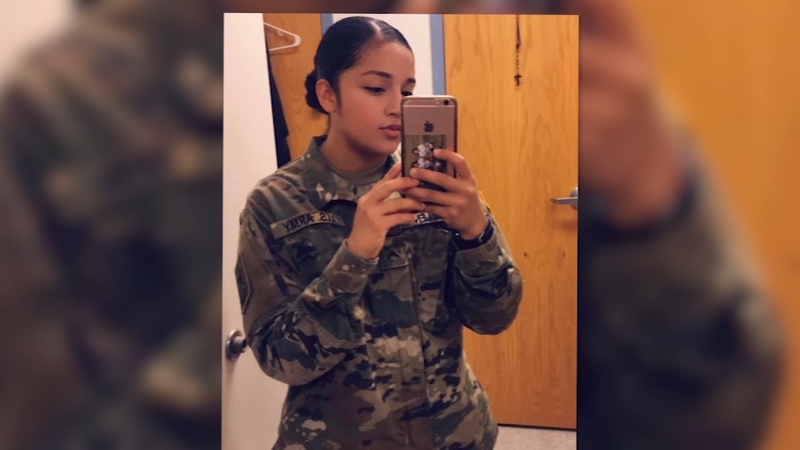 KILLEEN, Texas -- Fort Hood officials pushed back Thursday on allegations that a missing soldier presumed dead was sexually harassed and assaulted prior to her disappearance in April.

Aaron David Robinson, a 20-year-old Army Specialist, was identified as the person of interest in the case of Vanessa Guillen, also a 20-year-old Fort Hood soldier who disappeared in April. Robinson died by suicide when authorities made contact with him on Wednesday, according to special agent Damon Phelps with the Army's Criminal Investigation Command.

Those revelations are contrary to what Guillen's family members have claimed, most recently at a briefing Wednesday in Washington.

Guillen family attorney Natalie Khawam said she discovered at least two alleged incidents of sexual harassment -- a superior walking in on Guillen showering and another verbally assaulting her with vulgar remarks in Spanish. Khawam said she's worried about how this case might turn out. She said Guillen told loved ones she didn't want to report the sexual harassment out of fear of retaliation.

Were there cameras near where the young solider worked? Many have been asking. Hit play to find out what the Army said when they were asked.

Another suspect related to Guillen's case is in jail in Bell County. She is the estranged wife of a former soldier who was stationed at Fort Hood, according to Phelps. Army officials declined to elaborate on her identity because she is a civilian.

RELATED: What we know about Fort Hood soldier Vanessa Guillen since her disappearance in April

A shallow grave was located by search crews earlier this week along the Leon River approximately 20 miles away from the Army post. While the identity of the remains are still not known, Guillen's family believes they belong to her.

Texas Equusearch founder Tim Miller says that whoever dug that shallow grave went to great lengths to conceal the body. According to Miller, the remains were covered in lime, cement and hid under rocks.

A medical examiner in Dallas is working to identify the remains.