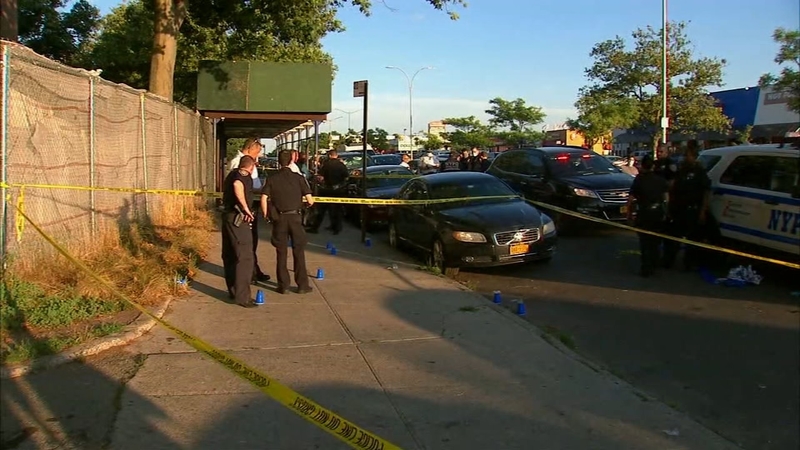 Protesters call for more policing amid rise in gun violence

CROWN HEIGHTS, Brooklyn (WABC) -- The Black Lives Matter movement is getting all the attention, but on the ground - in the neighborhoods plagued with gun violence, there are many who want more police officers on the streets - not less. They say yes to reform, and no to defunding police.

After endless bloodshed, that message is now starting to break through - and some say City Hall isn't listening.

"First of all, he's in La La Land, he's living in a fantasy world right now," said Community Activist Tony Herbert, "Today the gloves come off. To this mayor, and I'll say it again - what's happening in New York City, the blood is on your hands."

"But they want them there policing their communities like they police every other community. We have to get the anti-crime and the street-crime units back," Bannister said.

At the scene in Canarsie, one of three drive-by shootings on Monday night in Brooklyn, community leaders blamed the erupting violence on the mayor.

There were 14 shootings in the city overnight, with 18 victims, including a 17-year-old shot and killed in East Harlem.

In Brooklyn, investigators say a getaway car was linked to the drive-by shootings.

The NYPD also released surveillance of the two gunmen who opened fire at a cookout in Bed-Stuy, killing a 1-year-old boy on Sunday night.

"Everyone talks about Black Lives Matter. What about baby lives? What about teenager lives?" she said.

NYPD Chief Terrence Monahan is blaming gangs - one crew going after another indiscriminately firing on the streets.

"All the rhetoric of defund the police, get rid of the police, abolish the police - that's got to end. That has to stop. We need to find that middle ground of cops and communities working together," Monahan said.

Meanwhile, Mayor de Blasio was on the defense again Tuesday for disbanding the anti-crime unit.

"People don't have jobs or school to go to the court systems not working. I mean, come on. We are not dealing with business as usual here," he said.

"You're allowing these progressive protesters out here to destroy our city. You're at fault," said Gerald Seabrook of the United Clergy Coalition, "The community is not asking for police officers to be dismantled. The community is saying we want to be treated like every other community.

The group says that on Wednesday at 9 a.m. they will march in prayer across the Brooklyn Bridge to City Hall.

They say it is not a protest, and they are asking anyone who is a part of the Black Lives Matter movement to join them, saying they should, 'be out here against black-on-black violence, too.'

The NYPD is offering a $15,000 reward for any information leading to an arrest in the shooting of the 1-year-old boy.