New York Liberty's Sabrina Ionescu: Everything you need to know about her WNBA debut 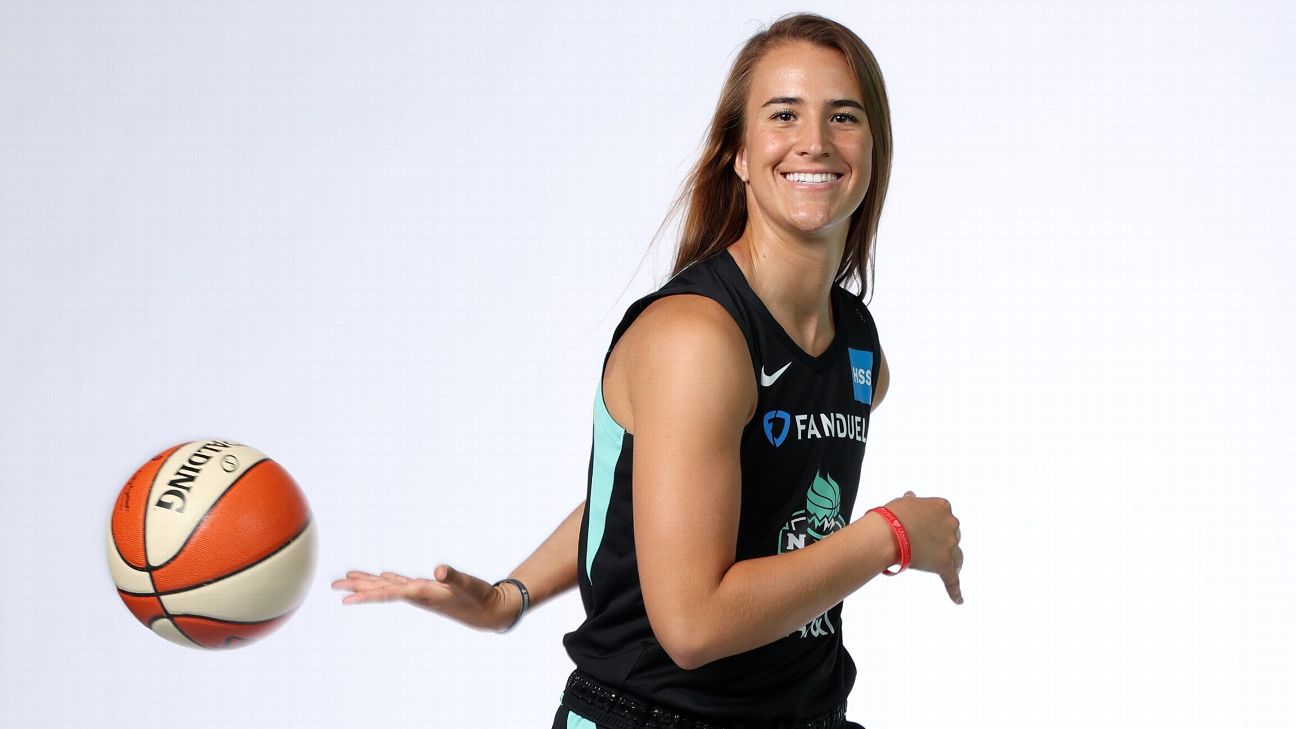 As Sabrina Ionescu transitions from the vibrant green of the Oregon Ducks to the seafoam green of the New York Liberty for the 2020 WNBA season, some things feel pretty familiar for her. Ionescu, the No. 1 pick in April's draft, is one of seven rookies with the Liberty this season.

"You know, it reminds me a lot of my freshman year at Oregon because we had seven freshmen," she said. "The ability to learn and adapt and not really know any better. We're playing with no pressure, honestly. No one expects us to be very good. I think having that underdog mentality that we're all going to have, it's going to help us. Maybe teams are gonna overlook us."


That isn't likely -- not with the top pick coming into the league after redefining college basketball. Last we saw Ionescu on court, she was leading Oregon to the Pac-12 tournament title. The coronavirus pandemic canceled the 2020 NCAA tournament and delayed the May start of the WNBA season. Now Ionescu makes her professional debut Saturday (ESPN, noon ET) against the Seattle Storm, the league favorites in this shortened, 22-game season at IMG Academy in Bradenton, Florida.

How can you watch Ionescu and the Liberty this season?

The Liberty will appear 10 times on CBS Sports Network and once on CBS. Other games will be streamed on WNBA League Pass, which is available via subscription.

What kind of stats should we expect from Ionescu this season?

We can get a rough estimate by translating her performance at Oregon to its WNBA equivalents, based on how the stats of past rookies have carried over. We also adjusted for Ionescu's likely large role on the Liberty's rookie-heavy roster.

First, we have to guess how much Ionescu will play. We went with 34 minutes per game, a tad less than what No. 1 pick Breanna Stewart played as a rookie in 2016 (34.7 MPG) and similar to the most minutes we've seen a rookie guard average in recent memory (Odyssey Sims, who played 34.4 MPG in 2014).

Based on that and New York's pace of play last season, the estimates for Ionescu are 16.7 PPG, 6.0 APG and 4.9 RPG. Although that might not sound nearly as dominant as Ionescu's near-triple-double averages during her senior season at Oregon (17.5 PPG, 9.1 APG and 8.6 RPG), those projected numbers would be historic production for a WNBA rookie.

Per Basketball-Reference.com, 6.0 APG would tie Sue Bird for the most by a WNBA rookie since Ticha Penicheiro averaged 7.5 in 1998. Only one other rookie (Temeka Johnson in 2005) has averaged 5.0 assists. Of the three, only Bird (14.4 PPG) averaged double-digit scoring. That means Ionescu could provide the best combination of scoring and playmaking ever by a WNBA rookie. -- ESPN's Kevin Pelton

What should we expect from the Liberty this season?

With so much youth, the outside expectations for the Liberty, as Ionescu said, aren't high. Most project them to finish last in the 12-team league.


But Ionescu and the Liberty aren't worried about projections. They're getting used to one another, new coach Walt Hopkins and a season in the "bubble," which New York general manager Jonathan Kolb thinks will help them, as the campus-like environment might remind them a bit of college.

Ionescu sees a lot of similarity so far between how the Liberty will play and how Oregon played under coach Kelly Graves.

"Just being able to spread the floor and have shooters," Ionescu said. "Just being able play, read and react and not necessarily have to call a play every time down. That's the freedom I was given at Oregon, and I think that's what helped us be so successful."

The other rookies for New York are guard Jazmine Jones (Louisville), forward/guard Jocelyn Willoughby (Virginia) and forwards Joyner Holmes (Texas), Leaonna Odom (Duke), Kylee Shook (Louisville) and Megan Walker (UConn). Guard Layshia Clarendon, who at 29 is entering her eighth season, is the oldest player on the roster. Center Amanda Zahui B., who has five years' experience, center Kiah Stokes (four) and guard Kia Nurse (two) are the other veterans.

Ionescu said she took advantage of the past few months to watch video of her teammates from their college or WNBA careers so that as a point guard, she would know some of their tendencies. She is prepared to shoulder some of the leadership, despite being a rookie.

"One of the things that makes her so special is she's not going to force her way into a leadership role," Hopkins said. "She's gonna lead in the ways that she feels are appropriate. She's not afraid to back off and allow a different voice on a given day. She does such a good job of both overt and covert leadership strategies.

"Having all that experience at Oregon, being somebody who came in right off the bat, [she] found a way to lead. And as the years went on, she found new ways to lead and grew into different roles. I don't think this is going to be any different. She's really special in that regard."

During Ionescu's freshman season at Oregon, the Ducks went 8-10 in the Pac-12 and were seeded No. 10 but jelled in the NCAA tournament and reached the Elite Eight. There were growing pains for the Ducks, but things turned out well. (They made the Elite Eight in 2018, too, and advanced to their first Final Four in 2019). That's a good memory for Ionescu to draw on for her WNBA rookie season. She knows there will be ups and downs for the Liberty, too.

"There's going to be games where things aren't going well, and you're not going to win," she said. "Having that understanding is going to help me this year."

Should we expect to see Ionescu tally triple-doubles?

Ionescu had 26 triple-doubles at Oregon, more than the total of any other men's or women's college player. Her final one came on Feb. 24 in a victory at Stanford after she spoke earlier in the day at a memorial service for Kobe Bryant in Los Angeles. That night, Ionescu became the first player to hit the 2,000-point/1,000-rebound/1,000-assist mark when she reached the rebounding part of the milestone.

Can Ionescu bring some of her triple-double magic to the WNBA? Rebounding will be the hardest part for the 5-foot-11 guard. She showed an amazing knack for that in college, but now she'll be facing the best rebounders in the world.


In WNBA history, including the playoffs, there have been just nine triple-doubles, according to ESPN Stats & Information. Houston's Sheryl Swoopes is the only player to record a triple-double twice: in 1999 and in 2005. The others, in chronological order: Utah's Margo Dydek (2001), Los Angeles' Lisa Leslie (2003), Detroit's Deanna Nolan (2005), Seattle's Temeka Johnson (2014), Los Angeles' Candace Parker (2015), Chicago's Courtney Vandersloot (2018) and Los Angeles' Chelsea Gray (2019).

Triple-doubles are more common in the NBA, but the games are 12 minutes longer, and the season is considerably longer, too. (The WNBA has played a 34-game regular season the past several years and planned to go to 36 this year before the pandemic shortened the season to 22 games.) There were 94 triple-doubles in the NBA this season before the pause in play in March, and there were 127 last season. Three players -- Luka Doncic, LeBron James and Nikola Jokic -- have at least nine triple-doubles this season.

Although it will be challenging, Ionescu might make the triple-double a little more common in the WNBA.

Is Ionescu the favorite to win WNBA Rookie of the Year?

Ionescu won just about all the awards she was eligible for this past college season, including national and Pac-12 player of the year honors. Will she add the WNBA's top rookie trophy?

As mentioned, she'll have plenty of rookie competition on her team. Plus, the No. 2 pick, Ionescu's former Ducks teammate Satou Sabally of the Dallas Wings, could be a strong contender, as could No. 4 pick Chennedy Carter, who's expected to get a lot of playing time for the Atlanta Dream.

Although it's an individual award, how teams fare can play into voting. Another rookie helping her team go to the playoffs this year could have an edge if the Liberty are in the basement.

This year marked the first time New York, one of the original eight WNBA franchises that launched in 1997, had the No. 1 draft pick. 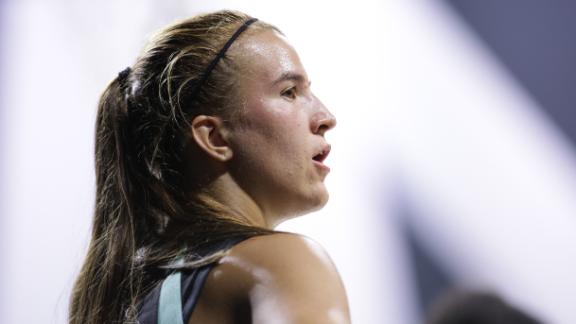 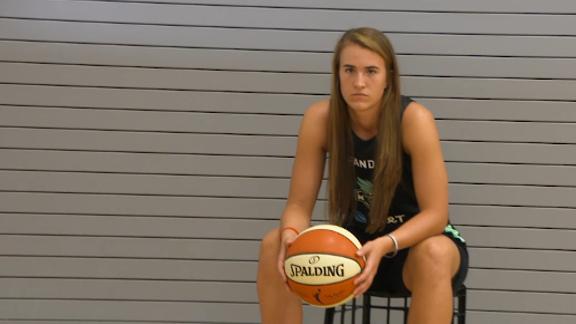