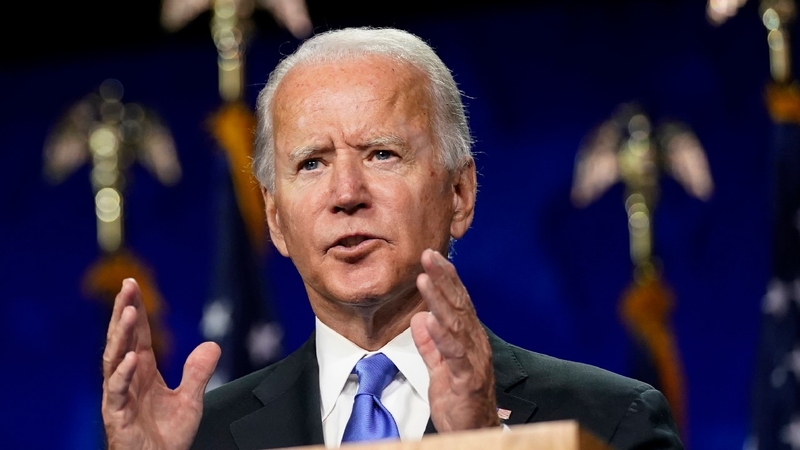 NEW YORK (WABC) -- Former Vice President Joe Biden has formally accepted the Democratic Party's nomination for president -- 33 years after he made his first bid for the White House.

Thursday was the Democrats' last night to make their case in primetime before Republicans take the spotlight next week and President Donald Trump accepts his party's nomination from the White House next week.

The Chicks
John Legend and Common

DOWNLOAD: Watch live and on-demand clips from the DNC by getting our Connected TV app for Fire, Roku, Apple TV and Android TV! Click here to learn how

Biden accepted the Democratic presidential nomination on Thursday, achieving a pinnacle in an unfinished quest that has spanned three decades and been marred by personal tragedy, political stumbles and more dynamic rivals.

The past hurdles fell away as Biden addressed his fellow Democrats and millions of Americans at home who he hopes will send him to the White House to replace Donald Trump.

Biden declared, "Here and now I give you my word, if you entrust me with the presidency, I will draw on the best of us, not the worst." He said, "I'll be an ally of the light, not our darkness."

The night's keynote address was the speech of a lifetime for Biden, who at 77 would be the oldest president ever elected if he defeats President Donald Trump in November.
EMBED More News Videos

The former mayor of South Bend, Indiana, says when he was born in 1982, it was unthinkable for an openly gay person to seek any federal office. Yet he noted Thursday at the Democratic National Convention that he had campaigned for the presidency.

He says he did so "often with my husband at my side, winning delegates to this very convention."

Buttigieg, a combat veteran in Afghanistan, also noted that when he joined the military, "firing me because of who I am wasn't just possible - it was policy," because of "Don't ask, don't tell."

He said there's still a long way to go in making America a place of healing and not exclusion, but he says if things changed so much in major social issues for the country over the last 10 years, imagine how much they could during the next.

"Joe Biden is right," Buttigieg said. "This is a contest for the soul of the nation."
EMBED More News Videos

Bloomberg urges voters to view Trump as employee
Businessman Mike Bloomberg is urging Americans to evaluate President Donald Trump like a coworker or employee when deciding whether to give him another term.

At Thursday's Democratic National Convention, Bloomberg asked: "Would you rehire or work for someone who ran your business into the ground, and who always does what's best for him or her, even when it hurts the company?"

He asked, "If the answer is no, why the hell would we ever rehire Donald Trump for another four years?"

Bloomberg's addition to the convention lineup is another example of Biden trying to appeal to moderate and even Republican voters. Bloomberg has been a Republican, independent and a Democrat throughout his career.

Earlier Thursday, the Democratic New Jersey senator said that as a Black man he "hopes that Americans press on and are not deterred" by distractions involving the voting process, such as the recent dispute over U.S. Postal Service funding and access to voting by mail.
EMBED More News Videos

Harris is the child of immigrants, and her first name reflects her Indian heritage. Her name is pronounced "comma-la," like the punctuation mark.

But President Donald Trump and other members of his party have been saying it wrong, even after they have been corrected.

The bit came after brief remarks by Yang, who ran in the Democratic primary.
EMBED More News Videos

4 former presidential contenders to speak on DNC's final night
Four of the Democrats who sought the White House this year will speak on the fourth and final night of Democrats' virtual convention Thursday: Bloomberg, Booker, Buttigieg and Yang.

Biden's campaign announced Thursday afternoon that the Currys will be joined by their daughters Riley and Ryan for a "family conversation about politics and the state of America."

"We want to ensure that our kids live in a nation that is safe, happy, healthy, and fair," Ayesha Curry said in an advance clip released Thursday afternoon.

Trump trolls Biden
On Joe Biden's big day, President Donald Trump is planning to show up in his rival's old backyard. Trump, in what can only be described as a piece of campaign trolling, on Thursday afternoon was staging an event just outside the former vice president's birthplace in Scranton, Pennsylvania, mere hours before Biden formally accepts the Democratic nomination for president. The event points to the importance of Pennsylvania as a battleground state - and to the urgency of the president's effort to close the gap in the polls. "Joe Biden has spent five decades in Washington betraying the people of Scranton," Trump said. "Joe Biden is no friend of Pennsylvania - he is your worst nightmare."

New York will allow voters to cast mail-in ballots
Citing concerns over the coronavirus, New York Governor Andrew Cuomo is expanding absentee balloting for the November election. This law allows a voter to get an absentee ballot due to risk or fear of illness including COVID-19 and ensures all absentee ballots postmarked on or before Election Day or received by the Board of Elections without a postmark on the day after the election will be counted.

Ex-Trump adviser Steve Bannon among 4 indicted in alleged 'We Build the Wall' fraud scam
President Donald Trump's former campaign boss Steve Bannon was among four people charged with bilking donors of the "We Build the Wall" crowdfunding campaign out of hundreds of thousands of dollars. Bannon was arrested Thursday morning on a boat in the Long Island Sound off the coast of Connecticut.

Ex-Clinton, Trump aides discuss 2016 vote, 2020
Hillary Clinton's 2016 campaign manager, Robby Mook, says former President Barack Obama issued an important warning to Democrats at their national convention that they can't be complacent in 2020. Mook said Thursday that Clinton lost because of turnout. He says what Obama "was trying to do" in his speech Wednesday on the third day of the convention was "send out that call -- that beacon -- to everybody to say, 'We can't sit back.'" Mook says he worries that Democratic presidential candidate Joe Biden's lead in the polls could change and he thinks "it was very important to put people on notice" that "we all gotta do our part."

Booker warns of Trump 'dirty tricks' in voting
Sen. Cory Booker says that "there may be dirty tricks" from President Donald Trump in the Nov. 3 general election vote and that the nation's voters should be stalwart in their determination to cast ballots. On ABC's "Good Morning America" on Thursday, the Democratic New Jersey senator said that as a Black man he "hopes that Americans press on and are not deterred" by distractions involving the voting process, such as the recent dispute over U.S. Postal Service funding and access to voting by mail. The Republican president has warned repeatedly without evidence about potential fraud in mail-in voting even though voter fraud is exceedingly rare. Booker speaks on the fourth and final night of Democrats' virtual convention Thursday, ahead of former Vice President Joe Biden's first address as the party's official nominee. Republican Sen. Tom Cotton of Arkansas says he doesn't think he heard "many or even any reasons to vote for Joe Biden" at the convention on Wednesday night, when former President Barack Obama, Biden running mate Kamala Harris and 2016 Trump opponent Hillary Clinton spoke. Cotton says Democrats "have to explain why America would be better off with Joe Biden as our president."

Kamala Harris makes history
Kamala Harris made history on Wednesday as the first Black woman to accept a spot on a major party's presidential ticket, a moment intended to galvanize Democratic voters heading into the fall campaign against President Donald Trump.

"A vision of our nation as a beloved community - where all are welcome, no matter what we look like, where we come from or who we love," Harris said. "A country where we may not agree on every detail, but we are united by the fundamental belief that every human being is of infinite worth, deserving of compassion, dignity and respect."

Barack Obama speaks at DNC
Former President Barack Obama has delivered a searing take down of Donald Trump while presenting Joe Biden and Kamala Harris as the ones who will "lead this country out of these dark times."

Obama made the case for electing his former vice president and Harris, a California senator, during a live address to the Democratic National Convention on Wednesday from the Museum of the American Revolution in Philadelphia. He implored people to vote, arguing American democracy is at stake.

"This administration has shown that it will tear our democracy down if that's what it takes to win," Obama said, urging voters to "leave no doubt about what this country that we love stands for."

Warren says Biden has 'some really good plans'
Former presidential candidate Elizabeth Warren says Joe Biden can hold his own on having a plan for nearly every policy challenge, large and small.

The Massachusetts senator said Wednesday night in her Democratic National Convention speech: "I love a good plan, and Joe Biden has some really good plans - plans to bring back union jobs in manufacturing and create new union jobs in clean energy."

Three young climate activists from around the country speak at the 2020 Democratic National Convention on Wednesday, Aug. 19.

Trump and the GOP are closely watching this week's Democratic National Convention to figure out what works and what doesn't work.

The GOP plans a mix of live speeches, videos and virtual content.

RELATED: More to know about the Democratic National Convention