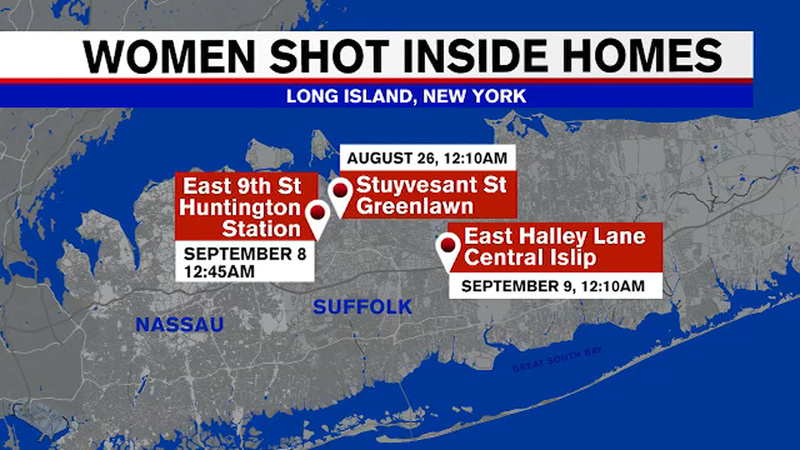 3 women struck by stray bullets while inside homes

SUFFOLK COUNTY, Long Island (WABC) -- The Suffolk County Police Department is investigating three incidents in the past two weeks in which young women were struck by stray bullets while inside their homes.

Investigators said in all three cases the homes were targeted due to drugs and gangs, but the women were not the intended targets. All three women are recovering from non-life-threatening injuries.

The most recent incident occurred on Wednesday at 12:10 a.m. A 25-year-old woman was inside a house on East Halley Lane in Central Islip when she was struck several times by bullets fired from outside the home.

Neighbor Thomas Lizama was in front of his home with a group of people when they heard the gunshots -- about seven of them, he said.

Almost exactly 24 hours earlier, at 12:45 a.m. on Tuesday, a 19-year-old woman inside a home on East 9th Street in Huntington Station was struck in the leg by a bullet fired from outside the house.

Elmer Trujillo lives across the street and said his wife called him after hearing the gunfire.

"She said, 'I heard like 5 shots.' I hope that they fix everything here," he said.

On August 26 in Greenlawn, a 28-year-old woman was on the second floor of a home on Stuyvesant Street when a bullet struck her in the hip.

"Obviously, we're looking into all three and making sure there's any connectivity, we're going to run that down," said Suffolk County Police Commissioner Geraldine Hart.

Hart said the department is investigating a number of shootings throughout the past two and a half weeks. However, she said non-fatal shootings in Suffolk County are up by only six from this time last year and that the county is experiencing record-low crime levels.