NFL Week 2 injuries: With Saquon Barkley, Christian McCaffrey out, who's up next?

While McCaffrey's status is in flux, the Giants fear Barkley will be lost to a torn ACL.


Below is a look at the players who were injured in Week 2, their status and who the next player up will be if they are lost for any period of time.

The NFL's highest-paid running back ($16 million a year) didn't return after limping off the field following a 7-yard touchdown run with just over 13 minutes remaining. The trainer was seen on the sideline taping what appeared to be McCaffrey's right ankle. Coach Matt Rhule was unsure if McCaffrey's injury was related to the back taking himself out in the first quarter on a third-down play. If McCaffrey misses time he'll be replaced by Mike Davis, who finished the game and had eight catches for 74 yards. Rhule has been high on Davis all training camp. "Mike's a good player,'' Rhule said. "He made some good plays. He's a threat out of the backfield. We'll see what happens with Christian.'' -- David Newton

Adams dropped out in the second half and did not return. But that could have been because the Packers were on cruise control over the Lions, who did everything they could try to take away Adams (three catches for 36 yards). Coach Matt LaFleur ignored a question about Adams' status after the game. The Packers on Sunday leaned heavily on Aaron Jones, who had 236 total yards from scrimmage. That's what they did last year when Jones missed four games because of turf toe, and it's what they could do again. But they also have more experienced at the Nos. 2 and 3 receiver spots with Allen Lazard and Marquez Valdes-Scantling, who each have a touchdown catch already this season. - Rob Demovsky

What's next: Campbell had to be carted off the field after he suffered a left knee injury in the first quarter. The Colts don't know the severity of the injury yet, but coach Frank Reich, who was near Campbell when the injury occurred, said "it didn't look good." Losing Campbell will put more pressure on rookie receiver Michael Pittman Jr. The USC product had four catches for 37 yards against Minnesota on Sunday.

What's next: Any injury involving an Achilles isn't a good one. Hooker suffered the injury in the first half. Rookie Julian Blackmon replaced Hooker in the lineup. Blackmon had a pass defense on throw a down the field that would have been a 20-plus yard reception and he deflected a pass that was intercepted by fellow safety Khari Willis. Sunday was Blackmon's first game since he tore his ACL in the Pac-12 championship game for Utah in December 2019.-- Mike Wells

What's next: Coach Doug Marrone said after the game Linder's status is uncertain and he'll be evaluated on Monday. The problem for the Jaguars is this is a short week -- they play the Miami Dolphins on Thursday -- and that may keep Linder from being able to play even if the knee injury isn't serious. Tyler Shatley relieved Linder and would be the starter. Right guard A.J. Cann also has snapped and likely would be the backup.

What's next: Hayden left the game on the Titans' final drive and did not return. He's the Jaguars' nickel back and essentially a starter - as well as their best defensive back. As with Linder, the short week may hurt his chances of playing on Thursday against the Dolphins if he is diagnosed with a concussion and doesn't clear the protocol quickly enough. Rookie Chris Claybrooks, who is also the Jaguars' punt and kick returner, came in for Hayden. If he did not start there on Thursday then it may be rookie Josiah Scott who gets the spot. -- Mike DiRocco

What's next: Akers suffered a rib injury when he was tackled on a five-yard carry in the Rams opening series, and the rookie second-round pick did not return. Rams coach Sean McVay said after the game he did not have an update on the severity of the injury. Because of the Rams' committee approach at running back, their run game did not suffer in Akers' absence, as Darrell Henderson and Malcolm Brown rushed for 81 and 47 yards, respectively.

Brown suffered a finger injury late in the game that kept him on the sideline. Henderson, as mentioned above, will handle the bulk of the carries if Akers and Brown are out.

What's next: Noteboom went down with a calf injury in the third quarter and also did not return. McVay did not have an update on the severity of the injury. Second-year pro David Edwards, who started 10 games last season, replaced Noteboom at guard. -- Lindsey Thiry

What's next: Jones left Sunday's game early in the first quarter with a groin injury and didn't return. Coach Brian Flores didn't have an immediate update on his status postgame, but it's fair to conclude the Dolphins may have to prepare to be without him for their quick turnaround game Thursday at Jacksonville. Pressure is on rookie first-round pick Noah Igbinoghene, who struggled covering Stefon Diggs Sunday. Without Jones, the Dolphins secondary allowed Josh Allen to throw for a career-high 417 yards and it provided tape on how to expose Igbinoghene and the rest of their defensive backs.-- Cameron Wolfe

What's next: The Giants fear Barkley has a torn ACL, sources told ESPN's Adam Schefter and Jordan Raanan. That would end his season, and put the Giants in a serious bind. Barkley is irreplaceable. The Giants built their offense around the talented third-year running back. They used Dion Lewis on Sunday in a 17-13 loss in Chicago, and Wayne Gallman will also see an increase in playing time moving forward. But the injury is a crushing blow to the Giants and Barkley, who is eligible for a contract extension after this season.

What's next: As if losing Barkley wasn't enough, Shepard injured his toe while being tackled late in the first half Sunday. He tried to return but on the first play of the second half realized it wasn't going to happen. That opened the door for Golden Tate (who was slated to be the third receiver) to see a spike in his usage. Tate now becomes an even bigger piece moving forward. He caught five balls for 57 yards in the second half in Chicago. C.J. Board also will enter the mix if Shepard can't return. -- Jordan Raanan

What's next: Another hit to the receiving corps, which already was down Jamison Crowder (hamstring) and Denzel Mims (hamstring). Without Perriman, the Jets were down to Chris Hogan, Braxton Berrios and Josh Malone, a patchwork group. Perriman's status for Week 3 against the Colts is uncertain. The team is hopeful that Crowder can return.

What's next: McGovern didn't finish the game, never a good sign. His status for Week against the Colts is uncertain, pending tests on Monday. He was replaced by ex-Colt Josh Andrews, who would get the nod if McGovern can't play. One of the key offseason acquisitions, McGovern is the leader of the line and a help to QB Sam Darnold. His absence also would hurt the interior running game.-- Rich Cimini

What's next: Joseph didn't return to the game after coming out in the fourth quarter. Rookie Kristian Fulton came in to take Joseph's place. The Titans are already without Adoree Jackson (knee) for at least one more game since he is on injured reserve. -- Turron Davenport 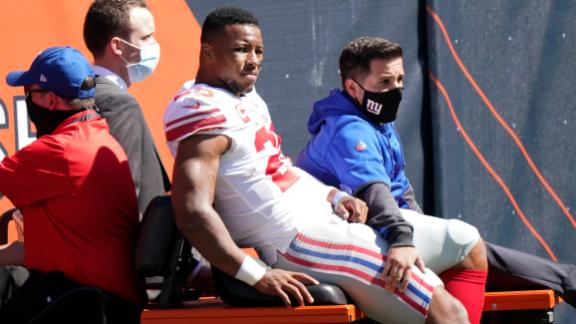 Saquon Barkley suffers apparent knee injury
After being forced out of bounds, Saquon Barkley clutches at his right knee in pain and has to be helped off the field. 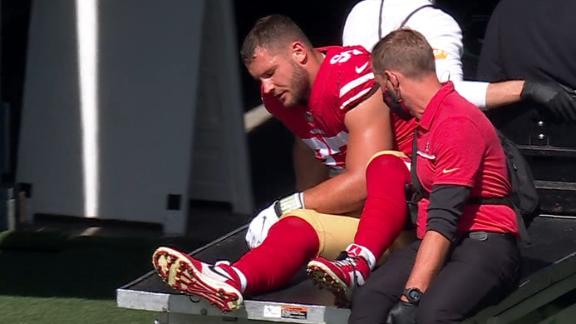 Nick Bosa carted off field with knee injury
49ers DE Nick Bosa injures his left knee in the first quarter against the Jets and gets taken to the locker room on a cart. 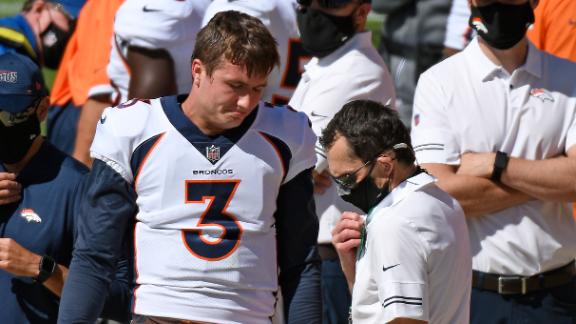