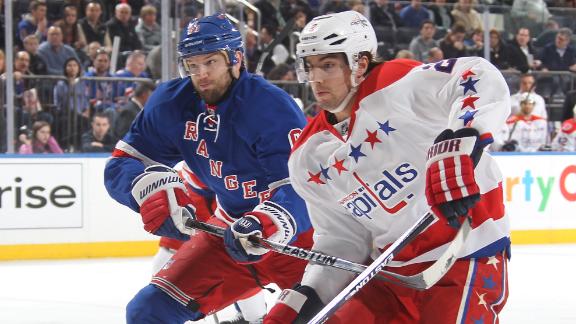 Though it seemed as if the hockey world was salivating at the possibility of a New York Rangers-New York Islanders second-round playoff clash, the stars did not align Monday, when the Washington Capitals knocked off the Isles in Game 7 at Verizon Center. That doesn't mean there is not a marquee matchup in store, however. In fact, this is one series we have become accustomed to seeing in the playoffs. The Capitals and Rangers have met three of the past four postseasons, with the Blueshirts taking two of three of those series. New York enters the Eastern Conference semifinals as the undeniable favorite by virtue of their Presidents' Trophy-clinching regular season and their speedy dispatching of the Pittsburgh Penguins in the first round, but you can't ever afford to overlook a team that has Alex Ovechkin in its lineup.

Fancy stats
Actually, let's start with some basic stats, since we all know how often these series come down to special teams. Both squads rank among the bottom of playoff teams in power-play percentages (Rangers, 15.0 percent; Capitals, 15.4 percent ). That's not a huge surprise for the Rangers, who have long struggled with the man advantage, but it is somewhat puzzling for the Capitals, who finished first on the power play during the regular season. Luckily for the Capitals, they were pristine on the penalty kill in their first-round series against the Islanders, thwarting John Tavares and Co. on all 14 power-play opportunities. From a possession standpoint, both teams are middle of the pack in the postseason, with Washington controlling 50.58 percent of shot attempts at even strength and New York controlling 48.59 percent. One thing to watch is whether the Capitals can sustain their prowess from the faceoff circle. Washington won 56 percent of its draws against the Isles in the first round.

Henrik Lundqvist, Rangers:The former Vezina Trophy winner is capable of stealing games, and an entire series, and if his postseason this play is any indication, he has returned to form following a harrowing vascular injury that caused him to miss six weeks during the regular season. Lundqvist surrendered only eight goals in five games against the Penguins, with Sidney Crosby contained to just a pair of goals and Evgeni Malkin held off the score sheet altogether. Lundqvist thrives on pressure and always seems to elevate his game come playoff time. And the 33-year-old has to be hungrier than ever, considering the sting of coming so close last spring. He knows there is a limited window to win and this Rangers team needs to capitalize with its core in the prime of their careers.

Gut check
Truth be told, the absence of Mats Zuccarello, who is out indefinitely with an upper-body injury sustained when he took a slap shot to the face in Game 5, will be a costly one for the Rangers. His speed, creativity and ability to antagonize opponents make him one of the team's most dynamic forwards and the Rangers will miss him dearly if he's not able to return. Fortunately for the Rangers, they'll get back defenseman Kevin Klein, who missed the entire first round with a broken arm sustained on March 11. Klein has a subtle, steady game, but his presence will provide a major boost for the team's back end. I think the Capitals are a tough matchup for the Rangers, because of Washington's punishing presence. Unlike the Penguins, the Caps play a big, heavy game -- a style that is well-suited for the playoffs. They were able to neutralize the Islanders' speed pretty well and completely shut down their power play. The X factor might be how well Braden Holtby performs. The 25-year-old had a sensational regular season, but he's shouldered a heavy workload in leading the Capitals back to the playoffs. If he can sustain a high level of play and poise, this will be an interesting series. It should also be interesting to see whether the rest the Rangers got after their first-round series ended proves beneficial or if that rest turns to rust. The Rangers got to sit back and watch as the Caps and Isles pounded each other through seven games, and you have to imagine the Rangers didn't mind seeing that.

Secret weapon
Evgeny Kuznetsov, Capitals: With the series-clinching goal in Game 7, the 22-year-old's confidence has to be soaring heading into the second round. Kuznetsov, the Capitals' first-round pick in 2010 (26th overall), also delivered a monster three-point effort in the Capitals' Game 5 win. With all the game planning the Rangers will have to do to neutralize top offensive threats in Ovechkin and Nicklas Backstrom, that could create some leeway for the young center.

Capitals coach Barry Trotz heaped praise upon Kuznetsov after his clutch performance in his first Game 7: "I said you have to go through a Game 7, you can't go around it, and just as a young player, he's got to go through the National Hockey League and into the playoffs, and all the things that you get tested on. Kuzy is going through things, and every situation that has come up, he's tried to work on it and get better and have an impact and he has."

The skinny
The Rangers are not going to get out of this round as easily as they made it past the Penguins, that's for sure. The Caps boast a physical, hard-nosed bunch with ample veteran experience, and they will make their presence felt. We never saw the Rangers best against the Penguins, but we'll have to see it in Round 2 if they want to make their second straight appearance in the Eastern Conference finals. These are two evenly matched teams built for the playoffs. My hunch? Lundqvist will give New York the edge. Rangers in 6.

Rangers, Capitals square off in the playoffs again
For the fifth time since 2009, the Rangers and Capitals meet in the Stanley Cup Playoffs, with three of those previous series going to seven games.