WABC
QUEENS VILLAGE, N.Y. (WABC) -- Thousands of police officers gathered on Long Island Thursday to pay tribute to NYPD officer Brian Moore, who was killed in the line of duty.

New York Gov. Andrew Cuomo was among those paying their respects at a wake in Bethpage.

Outside the funeral home on Thursday, there was a mixture of sadness and disbelief, of blue ribbons mixed with American flags, and neighbors still struggling to comprehend it.

The strongest and toughest the city has cried together and held each other, a mountainous blue brace against this unfathomable loss.

Moore, the son, nephew and cousin of police officers, had already started carving out a promising career for himself at the New York Police Department, making more than 150 arrests and earning service medals in less than five years on the job.

That trajectory came to an end on Monday, when the 25-year-old was pronounced dead at a Queens hospital, two days after being shot in the head by a man with an extensive criminal record, including serving five years in prison on an attempted murder conviction.

At the wake, Cuomo said he had spoken to Moore's father. "I said to the father, your son must have really loved you," said Cuomo. "He followed dad into the business. I know a little bit about that. I followed my father into the business and there is a sense of love and respect that that shows from son to father that is louder than any words."

Mayor Bill de Blasio came and spoke with officers, who have sometimes been hostile toward him, but this was not a time for that and police were cordial.

Timothy Cardinal Dolan came and met with the family to offer spiritual comfort, and city and state politicians were there as well.

And some, who came, are more intimate with the feelings of the Moore family.

Like Detective Stephen McDonald, who was just 29 years old when he was shot and paralyzed in the line of duty 29 years ago.

And the father of officer Wen Jian Liu, who was gunned down in December alongside his partner Rafael Ramos, came to offer his condolences to the family as well.

As the cortege made its way along the expressway this week, complete strangers paid their respects from highway overpasses.

Moore's body was driven Tuesday in a procession from New York back to Nassau County on the Long Island Expressway with a police escort in front and in back of the procession. Among those watching the cortege were two of his closest friends, Pat Davis and Frank Burns. "Brian knew what he was getting himself into every single day when he was putting on that uniform," said Burns.

"He knew he wanted to be a cop, and when he was eligible he joined the force," said Davis. "He was born into this."

Testifying on Capitol Hill Thursday morning, U.S. Attorney General Loretta Lynch said Moore was the first of two officers gunned down in less than a week.

"Earlier this week, Officer Brian Moore, a 25-year-old New York City police officer, died after being shot while trying to question a man in Queens, and just two days ago, Sergeant Greg Moore of Coeur D'Alene, Idaho, was tragically gunned down, also while interacting with a suspicious individual."

The wake was held at the Chapey and Sons Funeral Home in Bethpage, and the funeral will be 11 a.m. Friday, at St. James Roman Catholic Church in Seaford on Long Island.

Up to 30,000 officers from around the country are expected at Moore's funeral.

On Wednesday morning, there was a moment of silence in Times Square in remembrance of Moore. The National Law Enforcement Officers Memorial Fund announced a special fallen officer tribute on a billboard along Broadway. 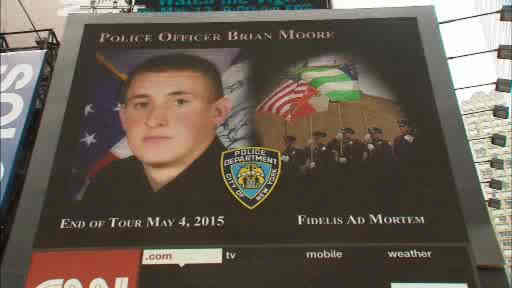 Black and purple bunting was hanging outside the 105th precinct Tuesday morning, as people continued bringing flowers, food and their condolences on the loss of Officer Moore.

The usually bustling back entrance of Jamaica Hospital fell into stunned silence Monday, with tears flowing under a cloudless sky as an NYPD ambulance carried away Moore's body as saluting officers, including his parents, lined the path.

At the 105th Precinct Monday night, children came with their parents to try to share the heavy burden of grief with the officers there.

"Who marches for the cops now? Nobody does," a resident said.

The officer was shot as he and his partner pulled up to question 35-year-old Demetrius Blackwell, a career criminal police say had been adjusting his waistband as if he had a gun.

Moore, who followed in the footsteps of his father, his uncle and his cousins, joined the department right out of high school in Massapequa five years ago.

In announcing his death, NYPD Commissioner William Bratton described Moore as an extraordinary man and said his passing is a great loss to the city.

"He proved himself to be an exceptional young officer," Bratton said, noting Moore had earned meritorious service medals.

"As a member of the NYPD, Officer Moore put the safety of his fellow New Yorkers before his own, and we will remember his service with gratitude and pride," Gov. Andrew Cuomo said in a statement. "I join with all New Yorkers in mourning his passing and send my deepest condolences to his friends and family."

Charges against Blackwell were upgraded to murder after Moore's death.

"I am deeply saddened by the passing today of New York City Police Officer Brian Moore, who lost his life in the line of duty while protecting and serving our community," Queens District Attorney Richard Brown said in a statement. "Our thoughts and prayers go out to Officer Moore's family and his fellow officers. Officer Moore's death is a stark reminder of the dangers that our police officers face each day and the risks that they take as they carry out their sworn duty to keep our streets safe."

The first-degree murder charge carries a penalty of life in prison without the possibility of parole.

"As many of you know, New York lost one of its finest today in Officer Brian Moore, shot in the line of duty Saturday night," he said. "He passed away earlier today. He came from a family of police officers. And the family of officers, he joined in the NYPD, and across the country deserve our gratitude and our prayers, not just today but every day. They've got a tough job."

Blackwell, who officials say boasted of being a street "hellraiser" and who served prison time for attempted murder, was arraigned and ordered held without bail Sunday after appearing in Queens Criminal Court in a torn white jumpsuit. His hands were cuffed behind his back and legs shackled.

"New York City has lost another brave police officer who placed his life between crime and the good people of the city," PBA President Pat Lynch said. "Brian Moore is a hero in every sense of the word. His loss is felt by all of his brother and sister officers as we pray for Brian and for the loving family that he left behind. His family now becomes our family and we will support them in every way possible through the next difficult days and beyond. I'd like to express the gratitude of all New York City police officers for the support and prayers that have been shown by so many caring New Yorkers. God bless Brian Moore, his family and friends."

Police said Moore and his partner, Officer Erik Jansen, 30, exchanged words with Blackwell before he turned suddenly and opened fired. Officer Jansen then radioed for help.

"The man immediately removed the firearm from his waistband and turned in the direction of the officers and deliberately fired several times at the vehicle, striking Officer Moore in the head," Bratton said at a press conference at a Queens hospital.

The shooting took place Saturday around 6:30 p.m. near 212th Street in Queens Village.

"They did not have an opportunity to get out and return fire," the commissioner said at a news conference at Jamaica Hospital Medical Center with Mayor Bill de Blasio and other officials. 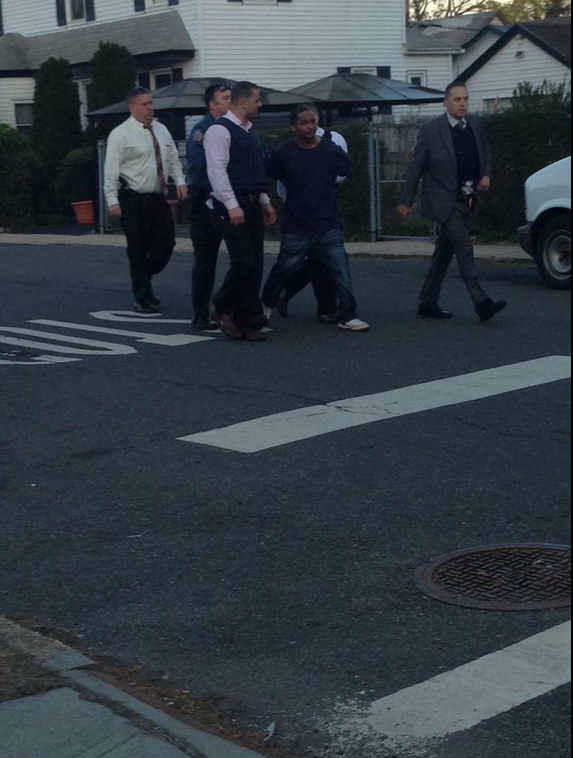 One woman who did not want to give her name lives in a house in Queens Village that was surrounded by police on Saturday night. The officers were looking for the weapon that Blackwell allegedly used to shoot officer Moore in the head. Police did locate it with two empty chambers, that housed, police believe, the bullets that killed a hero.

Authorities say the plainclothes officers, while riding in their unmarked car, spotted Blackwell, and saw him carrying what they believed was a gun. The officers asked him what he was carrying, and without warning, he allegedly pulled out a gun, and fired. One bullet struck Moore in the face.

The woman watched fellow officers place Moore in another patrol car and rush the officer to the hospital. She says she was standing on her front steps when Blackwell calmly walked up.

By then, teams of officers were looking for the gunman. She says police told her and Blackwell to go inside for safety reasons, and they did. Moments later, everything changed.

"The first SWAT went to this house, and then we saw them coming for ours, guns drawn, they said to open the door," she said.

The woman says officers took Blackwell away in handcuffs.

The married father of three has just served seven years in prison for attempted murder. He also has arrests for, among other things, robbery and assault.

The New York Police and Fire Widows and Children's Benefit Fund will be making a $25,000 distribution to Officer Moore's family. The Benefit Fund is an independent, non-profit organization that provides financial assistance and a network of support for the families of New York City first responders who are killed in the line of duty.

"It is a painful day for all of us," de Blasio said. "It is a reminder of the dangers that all of our officers face every single day." 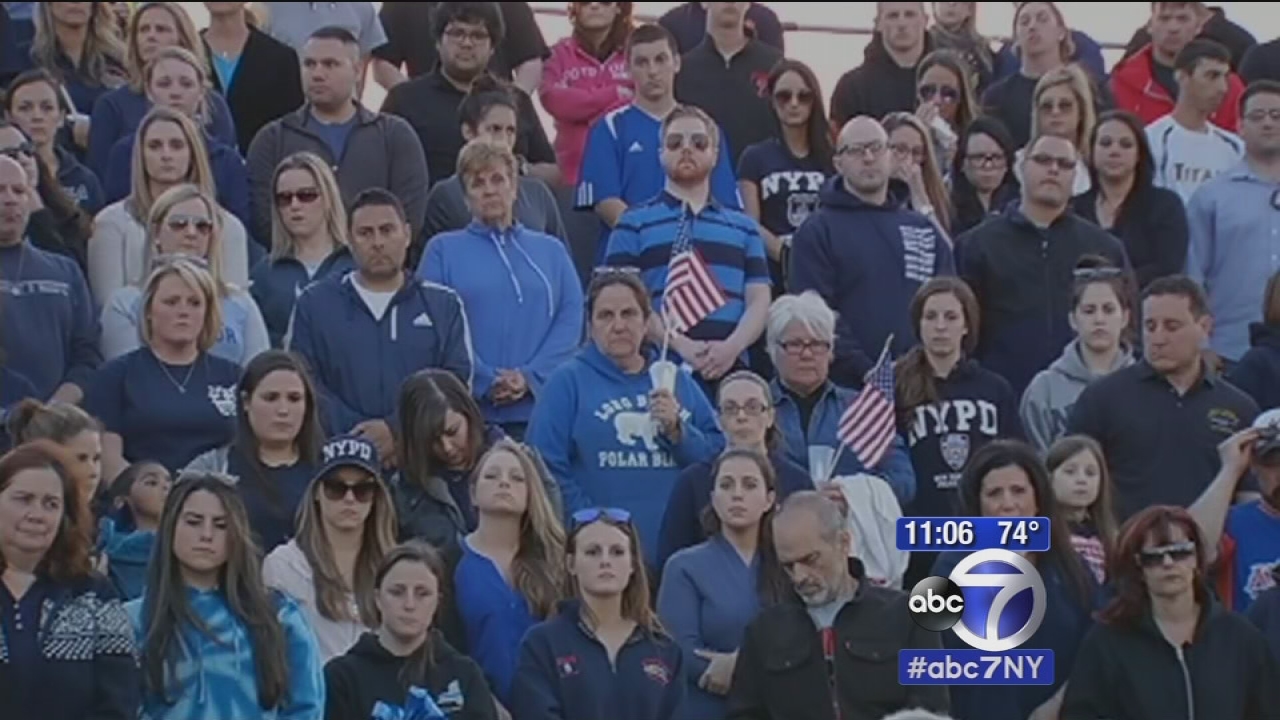 Retired New York City Firefighter Eric Szillus organized this event. He wanted to turn his anger over the shooting into something positive, into support for the Moore family.

Officer Moore graduated from Plainedge High School in 2007 and keeping with tradition became a proud member of the NYPD.

"We need to be thankful that there was a hero amongst us named Brian Moore," de Blasio said. 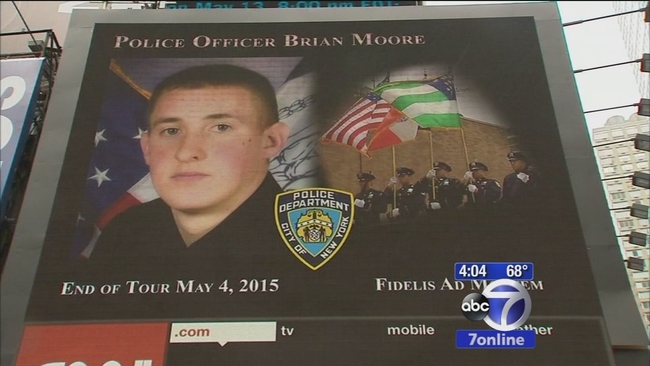