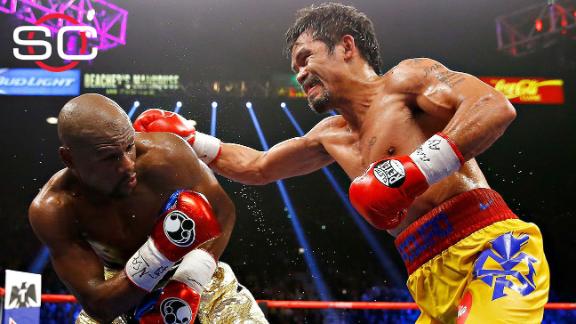 If pound-for-pound king Floyd Mayweather is up for a rematch with Manny Pacquiao next year, so too is Pacquiao, Top Rank promoter Bob Arum told ESPN.com on Tuesday.

Mayweather, who outpointed Pacquiao on Saturday night at the MGM Grand in Las Vegas in the richest fight in boxing history and one of the most anticipated, albeit one devoid of action or drama, told ESPN's Stephen A. Smith in a text message on Tuesday that he be would open to a rematch with Pacquiao after the Filipino legend recovers from shoulder surgery to repair what his surgeon, Dr. Neal ElAttrache, told ESPN.com was a "significant tear" in his right rotator cuff.

"I will fight him in a year after his surgery," Mayweather texted Smith.

Arum said that as difficult as it was for the Pacquiao/Top Rank/HBO and Mayweather/Showtime camps to make the deal for last Saturday's fight -- and as equally difficult as it was to work together during the promotion -- he believes they could make a deal for a rematch.

"I think we now know what the pitfalls were," Arum said. "And, ultimately, with all the aggravation and trouble, look at the pot of gold that we both produced. I think there will probably be less aggravation in a rematch. We understand each other better now. There's a real possibility it could work even better."

Arum suggested that Mayweather forgo a September fight and simply wait for Pacquiao and fight him in April, which is when the MGM plans to open a new 20,000-seat arena in Las Vegas.

"I think the wisest course of action is for Floyd to wait," Arum said.

Arum said Pacquiao is due to have surgery to repair the injury on Wednesday in Los Angeles. Arum said Pacquiao was looking at a two-to-three hour procedure and that he would be released later in the day after the operation. ElAttrache estimated that Pacquiao would be out of action between nine months and a year.

"We first have to make sure the rotator cuff heals well," Arum said. "Dr. ElAttrache is a famous surgeon, one of the best in the business, so I'm confident the surgery will work, and if it does, why wouldn't we entertain a rematch?"

Pacquiao, who suffered the injury about 2 weeks before the fight, failed to disclose it to the Nevada State Athletic Commission on his prefight medical questionnaire, which specifically asks if the fighter has a shoulder injury. Pacquiao checked the "no" box rather than the "yes" box, angering many who shelled out huge money for tickets, $100 for pay-per-view -- the most expensive ever -- and bettors who wagered millions in Las Vegas on the fight. It has already led to at least one lawsuit.

Pacquiao faces possible discipline from the Nevada commission for failing to disclose the injury. Still, Pacquiao, who was not near 100 percent healthy for the bout, could wind up with a rematch against Mayweather.

Although Mayweather repeatedly said during the promotion -- and again at the postfight news conference -- that he plans to fight in September in the final bout of his six-fight Showtime/CBS contract and then retire, he clearly has had a change of heart based on the text he sent to Smith. It would not come as a surprise if Mayweather, still at the top of his game, continued to box beyond September, when he could move to 49-0 and go for 50-0 in the rematch while making another nine-figure payday.

Mayweather (48-0, 26 KOs), 38, admitted at the postfight news conference that he has been known to say one thing, change his mind and contradict himself.

Even if both sides want to make a rematch, making the deal would seem difficult. One would figure that because Mayweather beat Pacquiao he would want an even greater share of the money in a rematch than the 60/40 split he got in his favor for last week's fight.

Arum disagreed. While he said he didn't "want to negotiate through the media," Arum said, "The fact that he won the fight, what does that mean? The two of them together created such a bonanza -- numbers we've never seen before -- and without Manny, who could Floyd create a bonanza like that with? And without Mayweather, who is Manny going to fight to create as much money? Maybe we should get more than the 40 percent. They need each other to create this kind of money."

"Then he rested it for a couple of months and it went away," Arum said. "It's a recurring kind of injury. It can kick up again, which it did in sparring [2 weeks before] this fight. They gave him a series of treatments that enabled the pain to go away and then when he went into the fight, he was feeling absolutely no pain and using his right arm.

"I thought initially it was in the third round, but it was really sometime in the fourth round that he re-injured it. The doctor said this is the time for him to no longer have to live with that, to repair it and it will be as good as new."

The pay-per-view figures are unlikely to be released until next week, when the promoters, HBO and Showtime have a better handle on the cable numbers, but Arum said the numbers he has seen so far from satellite services and telecom companies are "breathtaking."

"We've never seen anything like what we are seeing with the numbers so far," Arum said.