7 On Your Side: Top tips for budding entrepreneurs 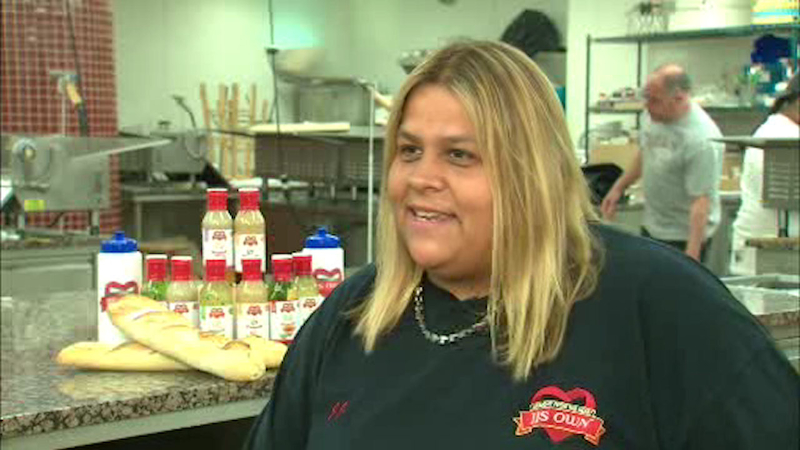 NEW YORK (WABC) -- Have you ever been shopping, looked at the shelves and said, "Why didn't I think of that?" Well, 7 On Your Side is going to help you go from idea to action to, perhaps, marketplace with some tips from some successful entrepreneurs.

But first, we've got the story of a Superstorm Sandy victim who, despite setbacks, never lost sight of her dream to create marinades that are now carried by one of the largest chains in the country. It's a lesson in launching your own food product, and fear of failure kept this intrepid entrepreneur going. And by growing slowly, she turned her love of lime into a line of fresh dressings.

"There's been plenty of times I wanted to quit," Joy Ortiz said.

But she never gave up, turning her taste from a basement business slayed by the hurricane into a line of homemade marinades carried by Whole Foods.

Joy is now making "JJ'S Own" in the same facility her childhood friend, Buddy Valastro, a.k.a. The Cake Boss, owns and operates. She still stirs, bottles, packs and delivers to stores herself, although now she can afford a company van.

7 On Your Side first met Joy the night Sandy struck -- October 29, 2012 -- when her family was rescued from their flooded home.

And yet, she still managed to get her startup idea of a cilantro-lime mayo onto store shelves six months later.

"It gives me tremendous satisfaction," she said.

The business suffered an early setback when a partner parted ways, and she changed the name of her company and launched a new line by going back to the drawing board. And then, JJ's Own Lime Basil Vinaigrette was born.

She says her one secret to her success is taking it slow, and instead of expanding quickly, she concentrated on the consumer and consistency.

Perseverance is key, as Ortiz got the name of the contact at Whole Foods and admits relentlessly cold calling and bugging her. And that early setback taught her not to go into business with friends, though that is obviously a personal decision with caveats.

We are looking for your ideas, as well, so message us on Facebook if you have a similar story!
Related topics:
7 on your side
Copyright © 2022 WABC-TV. All Rights Reserved.
7 ON YOUR SIDE
7 On Your Side: Tips for ordering your free at-home COVID tests
Woman wrongfully fined $259K for neighbor's violations in NYC
7 On Your Side tips to dig out of credit card debt
Fake at home COVID tests are out there - how to spot them
TOP STORIES
Meat Loaf, 'Bat Out of Hell' rock superstar, dies at 74
Burglary suspect who fired at police in Bronx was out on bond
CDC says omicron in NYC wastewater before reported in South Africa
Watch NatGeo documentary 'The First Wave' free for 48 hours
7 On Your Side: Tips for ordering your free at-home COVID tests
5-year-old Yorkie killed in NJ bear attack, 2nd this month
AccuWeather: Frigid Friday
Show More
COVID Updates: 2 companies accused of COVID testing fraud
FRIGG silicone pacifier recalled due to choking hazard
Many COVID-19 vaccine side effects caused by placebo effect: Study
Bronx DA dismissing 133 convictions after former detective charged
18-year-old taking groceries to grandma killed by stray bullet in NJ
More TOP STORIES News