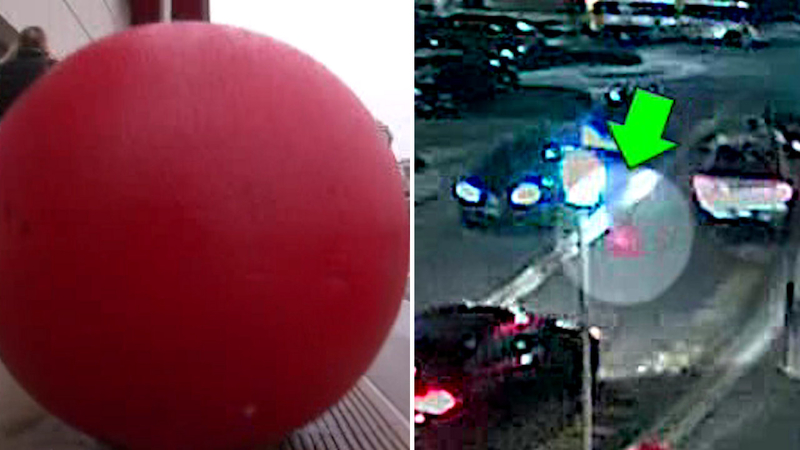 PARAMUS, New Jersey (WABC) -- There's a follow up to last week's report on a video that went viral, unbelievable video of a giant Target big red ball barreling through a Paramus parking lot. After 7 On Your Side's story aired, the retail giant made major repairs to their big red bollards.

It was a social media surprise 7 On Your Side found on a construction company's Facebook page for Westgate Construction, LLC. There they were, more than a dozen pictures showing repairs the contractor made to all four cement balls sitting outside the Target location in Paramus, New Jersey.

The repairs were made months after Eileen Grady's car was hit and weeks after 7 On Your Side asked Target about the safety of its bollards.

The video went viral after our story aired showing the driver of a parked pick up, edge forward knocking one of the giant Target bollards off it's base. The ball starts rolling and smashes into Eileen's car, according to the dealer estimate where she leased the car, $3,500 hundred in damage. But Target denied her claim.

"Oh, Target won't be responsible for this," Grady said. "I said, 'I don't own the big red ball, Target does.'"

When 7 On Your Side went to check out the bollards, there were four in place. But a week later, another one was missing. In the last couple weeks something must've happened to the fourth ball, because in its place is just a rusted stump. Target never told 7 On Your Side what happened to that one. The ball was put back with huge gash on it.

"It's made of solid concrete. These things are very dangerous. Obviously, they're not supposed to move," Grady said.

Also unmovable was Target. They are still not budging on Grady's repair bill. Police couldn't see the license plate on the truck that banged into ball. So who should pay?

More than 15,000 people voted in an online Patch poll, and more than 75% said the retail giant should pay up.

Target corporate released a statement: "As part of our commitment to guest safety, Target has procedures, policies and trainings in place to ensure that our stores are safe places to shop and work. This includes maintenance as needed on the bollards outside our stores. As mentioned previously, we are aware of this incident, and we will handle all communication directly with the guest in question. I can confirm that, since our original statement was provided on 1/26, a vendor has checked all bollards at the store." - Erika Winkels, Target Spokesperson
Related topics:
paramuscar accident7 on your sidetarget
Copyright © 2022 WABC-TV. All Rights Reserved.
7 ON YOUR SIDE
7 On Your Side, congressman team up to save homeowner from foreclosure
Dozens of campaign workers owed thousands by candidate for NY governor
$66,000 in life savings frozen by bank for over half a year
Best money moves to deal with mortgage rate hike
TOP STORIES
Shark patrols after man bitten; Tri-State beaches gear up for July 4
2 officers killed, others injured in Eastern Kentucky shooting: police
2nd visitor in 3 days gored by Yellowstone park bison
Happy Bobby Bonilla Day: Here's why the Mets pay him every July 1
Family member beats shark to free teen girl from its jaws
14 firefighters, 3 residents hurt in 5-alarm Williamsburg fire
Police arrest man wanted in Queens triple murder mystery
Show More
Woman, 86, recognized as longest-serving flight attendant
AccuWeather: Very hot and humid
Nathan's Hot Dog Eating Contest competitors weigh in on Coney Island
4th of July holiday weekend travelers encountering canceled flights
NY lawmakers now considering abortion protections along with gun laws
More TOP STORIES News