7 On Your Side: Tailgating food safety tips 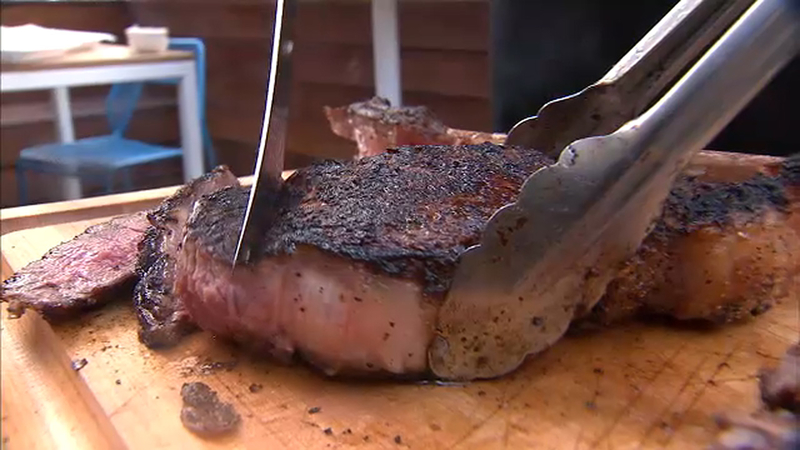 7 On Your Side: Tailgating food safety tips

NEW YORK CITY (WABC) -- Are you ready for some football? The NFL season is underway, and tailgaters will be crowding parking lots outside their favorite stadiums for the next five months. But unfortunately, harmful food-borne bacteria loves a party too.

Often, tailgaters breaking out a spread outside can let the fun fuel contamination.

"During tailgating, there's lots of people, energy and excitement, plus adult beverages," said Dr. Susan Whittier, director of clinical microbiology at New York Presbyterian/Columbia University Medical Center. "And we may tend to lose our focus on safe practices we would normally do in our own kitchens."

"We see in the US over a million cases per year," she said. "The common symptoms are diarrhea, vomiting, sometimes fever, with the onset eight to 72 hours after consumption."

The culprit is often raw poultry, as salmonella can cultivate on chicken where its not harmful to the bird but very harmful to humans.

"Once I take my raw chicken and put it on the cutting board, that's the cross contamination," king of meat Pat LaFrieda, Jr., said. "That the hazard."

LaFrieda ran through some tailgating safety plays outside his restaurant The Pennsy at Madison Square Garden, where he and his restaurant manager Melanie Landano were experimenting with a 1,500-degree outdoor griller called The Otto.

"The biggest mistake is really not having enough utensils," said LaFrieda, whose team from Pat LaFrieda Meats -- which supplies hundreds of area restaurants -- was also busy feeding thousands of US Open fans outside the tennis matches in Queens at the same time.

He advises bringing a few sets of tongs and always using them separately when tailgating or cooking for a crowd outdoors.

"Someone will take what they just used for the raw beef and use it for the vegetables," he said. "That's a big no-no."

Next, he says set your grill or hibachi up for a zone defense -- grill beef on one side, and keep chicken on the other. Then have a separate area for veggies.

Once you're finished with a utensil, don't reuse it.

You also shouldn't reuse marinades you used on raw meat, and make sure you wash your hands and punt any leftovers into the trash.

"Tailgate parties go on for a long time," Dr. Whittier said. "Anything out for that long should be discarded."

In addition to salmonella, e.coli bacteria on raw meat is dangerous. So make sure those burgers and steaks are cooked thoroughly and consumed right away. Bacteria grows rapidly on raw, un-refrigerated and under-cooked meat .

"It doubles every 20 minutes in warm temperature" Dr. Whittier said. "While you're in the game, e.coli is having its own party in the hamburger."

Always make sure you keep cold food cold -- 40 degrees for salads, desserts and anything with mayo -- and keep hot food hot -- 140 degrees.

Follow the two-hour cook-and-consume rule -- meat should be taken from the cooler and cooked, then eaten within two hours. It is not a good idea to thaw frozen meat outside.

Lastly, when in doubt, throw in out.

If using the app, click here to send us a news tip
Report a correction or typo
Related topics:
food & drinkfoodcooking7 on your sidefood safety
Copyright © 2022 WABC-TV. All Rights Reserved.
7 ON YOUR SIDE
Tips winterize your home and keep gas, electric bills low
How to get reimbursed for at-home COVID tests
7 On Your Side: Tips for ordering your free at-home COVID tests
Woman wrongfully fined $259K for neighbor's violations in NYC
TOP STORIES
Winter Storm Update: Hochul holds briefing on NY preparations | LIVE
Widow delivers heart-wrenching eulogy for NYPD Detective Jason Rivera
Final farewell for NYPD Officer Jason Rivera
NY area urged to prepare for snow, wind as nor'easter approaches
Winter nor'easter: LIRR likely suspended, other mass transit info
Gov. Murphy declares state of emergency in NJ ahead of nor'easter
Connecticut braces for snowy winter nor'easter
Show More
Off-duty NYPD officer working security shoots man after stabbing
10 injured when bridge collapses in PA; human chain formed to help
'Tiger King' Joe Exotic resentenced to 21 years in prison
AccuWeather Alert: Nor'easter to bring heavy snow
COVID Updates: Kids 5-11 need to be fully vaxxed for NYC indoor venues
More TOP STORIES News
Send us your questions, issues, and story ideas to Nina by filling out the form above, by emailing 7OnYourSideNina@abc.com, or contact Nina on her Facebook page or tweet her at Twitter @7OnYourSideNY! You can also call the 7 On Your Side Hotline at 917-260-7697.