7 On Your Side: How safe is your taxi? 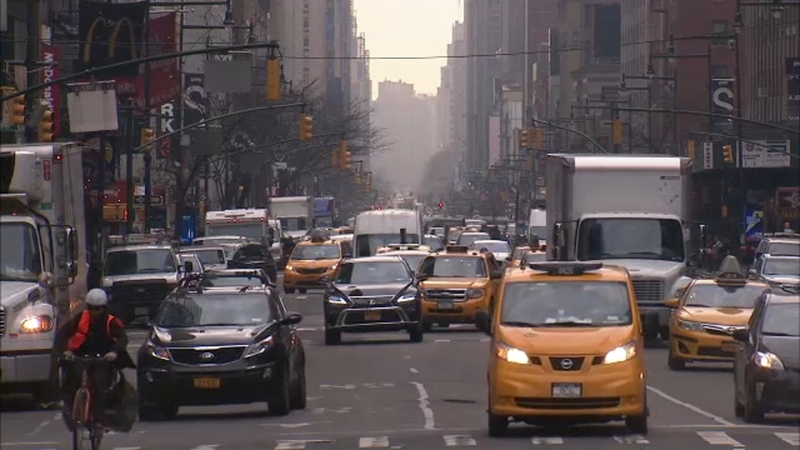 NEW YORK (WABC) -- Passengers in New York City have a close to one in five chance of hailing a car with an uncorrected defect.

With help from Carfax, 7 On Your Side Investigates compared multiple lists maintained by the NYC Taxi and Limousine Commission of licensed for-hire vehicles, including yellows cabs, Uber, Lyft, Via and other black car services, to the National Highway Traffic Safety Administration's list of vehicles with outstanding safety recalls.

The data revealed close to one in five of the more than 130,000 for-hire vehicles had uncorrected safety recalls, with yellow cabs having a lower rate of non-compliance than other vehicles associated with other for-hire transportation companies.

"Unfortunately, a lot of us have a cavalier attitude when it comes to recalls, and that's because we hear about them all the time," said Christopher Basso, public relations manager at Carfax. "These are safety-related issues, things that can cause fires, crashes, exploding airbags, real safety concerns that not only impact the passengers of those vehicles but anyone else on the road as well."

Among the uncorrected recalls, 7 On Your Side Investigates identified defective sticky accelerator pedals that can cause accidental acceleration and have been blamed for fatal crashes, Takata air bags that can explode, defective steering wheels that can fail in motion and bad door latches that leaves doors as risk of flying open while a car is in drive.

"The cars!" exclaimed Marisa Patykewich, a public transportation user on the Upper West Side. "That's good to know. They could cause accidents, or hurt people, or break down."

"That's not good. I wouldn't be in a hurry to take a cab now," said Andy Zeitlin, also a public transportation user.

7 On Your Side Investigates confronted driver Sureet Barua about a defective door latch on his car.

"I'm not having any problem with this right now," Barua explained.

Barua said he would take the car to a garage, but less than a minute later, 7 On Your Side Investigates observed him picking up another passenger.

Another driver who went by Joseph openly admitted to 7 On Your Side Investigates that he had opted to ignore a recall alert he received on his vehicle.

"It's just something very minor," he said.

A driver named Sied was on the road with a defective steering wheel. When 7 On Your Side Investigates asked if he thought that was a safety concern, he replied, "No."

One driver explained he wouldn't want to put a car out of service because drivers "don't want to waste time."

"The faster we can get a passenger, is better for us," he said.

Other drivers without open recalls took issue with their colleagues' behavior.

"As a professional driver, you have a responsibility. You have lives behind you," said Sagid Mehmood, who's been a yellow cab driver for 10 years. "This is my living. It is my job to fix my car. It's also me who can be hurt, so professionally they have to."

The federal government requires vehicle manufacturers to notify owners about safety recalls and correct the issue for free, but there's no requirement that owners comply.

Yellow cabs visit the TLC inspection facility in Queens for all three inspections. While other for-hire companies come once every two years, obtaining the remaining five required safety inspections at state-approved facilities.

7 On Your Side goes behind the scenes with the TLC

In 2017, TLC performed 159,909 vehicle inspections of yellow cabs, street hail liveries and other for-hire transportation providers representing a roughly 10-percent increase in inspections over the prior year.

While the TLC puts these vehicles through an extensive 200-point inspection, the agency is not requiring drivers to correct recalls in order to pass inspections and pick up passengers.

Joshi said the city is aware of the inherent safety risk posed by uncorrected recalls and is actively working to develop a system in which the city can incorporate recall checks into vehicle inspections.

"We have a good idea of how to get it done. It's a matter of getting those pieces together in a way we can get it done efficiently," Joshi said.

Joshi said while the city can easily identify if a car has a recall, it is still developing a streamlined system to identify if parts are available for that recall and the degree of danger posed by the recall.

"The NHTSA recalls are all considered safety recalls, but some of them are a high priority and some are a much lower priority," Joshi said. "These people's livelihood is driving professionally. So, if we are going to say you can't drive because you haven't met a recall, we need to make sure it's a high-priority recall."

Joshi added that TLC does send out industry alerts to notify drivers about large recall campaigns, such as the issue involving Takata air bags that led to recalls on roughly 37 million vehicles, according to NHTSA.

In general, among the public, recall compliance is also an issue.
A 2017 NHTSA report estimated vehicles up to five years old have average recall completion rates around 76 percent. NHTSA data indicates that completion rate drops to just 56 percent on average for older vehicles.

In a written statement, an NHTSA spokesperson said there was no excuse for anyone, professional driver or private citizen, "not to check for open recalls or respond to a manufacturer's letter in the mail that clear announces a recall on the vehicle. Recalls are serious safety issues that should be promptly addressed."

Both NHTSA and Carfax offer websites that allow vehicles owners to quickly enter a vehicle's VIN number, found on the lower driver's side windshield of a vehicle, and check for any outstanding recalls.

NHTSA also allows drivers to sign up for recall notifications.

NHTSA recommends drivers check for recalls twice a year -- whenever they turn their clocks for the time change.

Manufacturers will fix recalls at no cost, and the repairs can often be made in less than a day, sometimes within an hour or two.

7 On Your Side Investigates reached out to the taxi drivers' union, Uber, Lyft and Via multiple times for comment ahead of this report.

Only Uber responded to those requests.

A spokesperson said Uber sends out quarterly reminders to drivers encouraging them to check their vehicles for recalls, supports U.S. Department of Transportation efforts to raise awareness about recalls, and also encourages drivers to perform routine maintenance on their vehicles.

That spokesperson added that as the city's vehicle regulator, TLC ultimately is responsible for approving which vehicles are allowed to pick up passengers on the road.