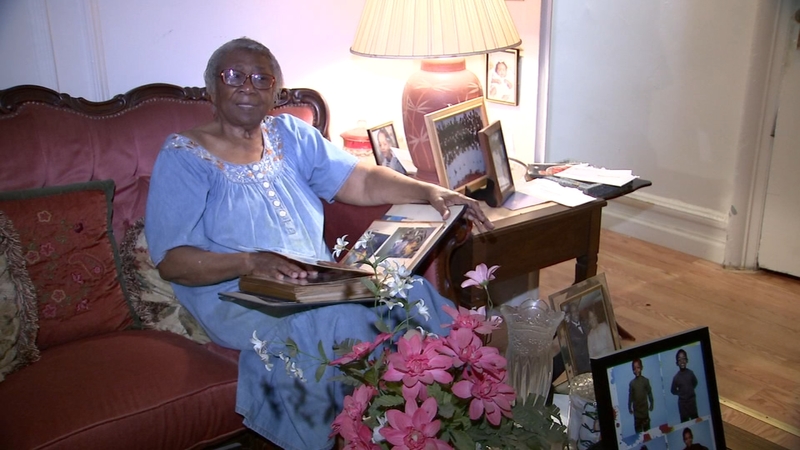 BROOKLYN (WABC) -- 87-year-old Rebecca Dobson hasn't left Brooklyn in 15 years, but her bank has a record of her taking money out of ATMs across the country and in a different country. Turns out, she was a victim of identity theft.

No siree. We heard the spry senior give a scammer an earful.

"Youre a fraud, a fraud!" she screamed into her flip-phone.

In the middle of our interview, the thief, calling himself Steve Jobs, from the FBI no less, called and asked her for bank account info.

Mother Dobson, as she's known to members of her church, is a savvy senior. She says she never gives out her personal info to anyone, yet over a week, a scammer emptied her bank account of nearly $12,000 - leaving her about $8 to her name.

"Nobody never got in touch with me, Chase never called me," Mother Dobson said.

There were scores of ATM withdrawals, all in three far flung locations like Las Vegas, New Orleans and Bethania, Panama.

Mother Dobson's niece even went to the bank and produced her aunt's passport to prove she hadn't been out of the country, but Chase still denied the fraud claim.

And the missing money was just the beginning, after the mysterious withdrawls, her phone stopped receieving calls. Her address was changed and she got three credit cards mailed to her in someone elses name with a fourth on the way, she stopped.

"Only Capital One called me and asked, 'Are you trying to get a card?' I told them, 'No, I didnt apply for a card,'" she said.

But Mother Dobson says she didn't get the same courtesy from Chase. Even though for decades, she's only withrdrawn from the teller, never the ATM, the bank wasn't refunding her money.

So we called Chase who took a second look, and the bank apologized.

"It's a good feeling!" said Mother Dobson, thrilled with the news she got all of her money reimbursed, all 12,000! "You did a good job!"

Chase said it reimbursed her the money she was owed, "As soon as it confirmed that the transactions were fraudulent."

"We always watch Channel 7, you have supporters and fans in us always," she said.

Chase said it was, "happy this issue is resolved and apologizes for the trouble it caused our customer."

The big takeaway: Step one is finding the fraud. That means you should regularly be scanning your account statement for fraudulent charges.

Then, report it to the bank as soon as possible. You have 60 days after the fraud to report it. After that the loss will usually fall on you. In most cases, you'll need to report this fraud to the police and get a copy of the police report. The banks will need this. Filing a report shows the bank that you didn't make these fraudulent withdrawals yourself, and you're just trying to scam the bank.

Customers who believe they've been a victim of fraud are encouraged to contact us immediately so that we can review any unauthorized charges and credit their account. The sooner we know what happened, the sooner we can help.

Customers have 60 days from receiving their first statement to report fraud.

Customers who have lost or believe their card has been stolen should contact us immediately so we can close the card and issue them a new one.

Keep your information safe. Don't give out your checking account or credit card numbers unless you the know the person or organization you're dealing with.

If using the app, click here to send us a news tip
Report a correction or typo
Related topics:
new york citybrooklynscam targeting seniorsscam7 on your sideidentity theft
Copyright © 2021 WABC-TV. All Rights Reserved.
7 ON YOUR SIDE
NJ storage customers will be allowed in their Ida-flooded units
Giants legend calls 7 On Your Side to help tackle storage frustration
Renters outraged storage unit disposing belongings after Ida flooding
7 On Your Side helps recover $500,000 for retired couple
TOP STORIES
Subway crime jumps, riders urged to stay alert
Passengers do nothing as woman is raped on train, police say
Hochul pushes for school vaccination sites ahead of approval for kids
NJ animal haven closing after Ida flooding raised safety concerns
Video: Wild shooting hits several cars on Bronx street
Facial recognition is everywhere. Here's what to know
COVID Update: Cases down 50% since beginning of September
Show More
Plane with 21 on board crashes west of Houston, Texas
US expected to authorize mix-and-match COVID booster shots
Tractor trailer crashes and burns on NJ Turnpike
Connecticut online sports betting gets fully underway
Aaron Boone to return as manager of New York Yankees
More TOP STORIES News
Send us your questions, issues, and story ideas to Nina by filling out the form above, by emailing 7OnYourSideNina@abc.com, or contact Nina on her Facebook page or tweet her at Twitter @7OnYourSideNY! You can also call the 7 On Your Side Hotline at 917-260-7697.