The top tips to avoid a mystery shopper scam 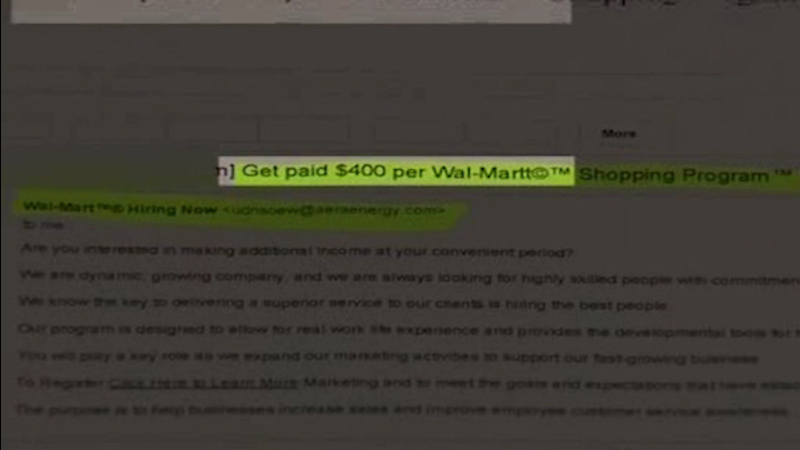 7 On Your Side: Mystery Shopper Scam

RIDGEFIELD PARK, NJ (WABC) -- The US Postal Inspection Service has a warning about an old scam that's picking up steam around holidays - mystery shopping And,unless you know, how to spot it, you could have your bank account looted just in time for the holiday season.

"I work full time it's still not enough." Raising a growing boy by herself, Shataya Franklin's full time salary barely covers their bills. "Rent, food in the house. So i need a second job and I thought I found it," said Shataya.

Shataya jumped at the offer, an email offer to earn money as a mystery shopper,

"I saw Walmart hiring now and I thought wow maybe I can do this," said Shataya.

She filled out the application, then got her assignments along with postal money orders. She was told to deposit the money orders into her bank account, withdraw the funds then follow her secret shopping instructions.

"I was supposed to buy something at Walmart and send the rest (via Western Union)," said Shataya.

Minus a few hundred as her pay, Shataya wired the remainder at Money Grams or Western Unions. She completed 3 assignments, before getting a call from her bank about those money orders.

"I'm like, 'counterfeit? How could it be? Counterfeit?' It was speechless," said Shataya.

The bills were all fakes. Now she owes her bank about $5,000, that's the amount she withdrew and wired to the scammers, plus bank fees.

"I cried when I hung up the phone. I just cried and broke down," said Shataya.

"If anyone's telling you to deposit any money? Red flag." Donna Harris of the US Postal Inspection Service warns consumers to always authenticate postal money orders before cashing.

"You can't take it at face value you have to do your work to make certain this is a legitimate company," says Harris.

Remember the original email enticing Shataya to mystery shop for Walmart, a closer look revealed a dead giveaway it was not legit.

"They they spelled Walmart wrong, with 2 T's" at the end," pointed out Shataya.

If she had noticed that the young mom says she wouldn't have fallen for the scam that could cost her and her son Kyrus their home.

"I'm just thinking about my son, it's around the holidays. How do you tell a 6 year old that Christmas is not going to happen," said Shataya.

The big takeaway here, first, check the check. Call the USPS or go to the post office, to find out whether it's real. Just because a bank cashes a check, doesn't mean it's good. The banks can come back to you months later with bad checks, and you'll be stuck.

Also, it is important to remember to never pay for a job. Anyone asking for be sent money is pulling a scam, and that usually involved wiring money.