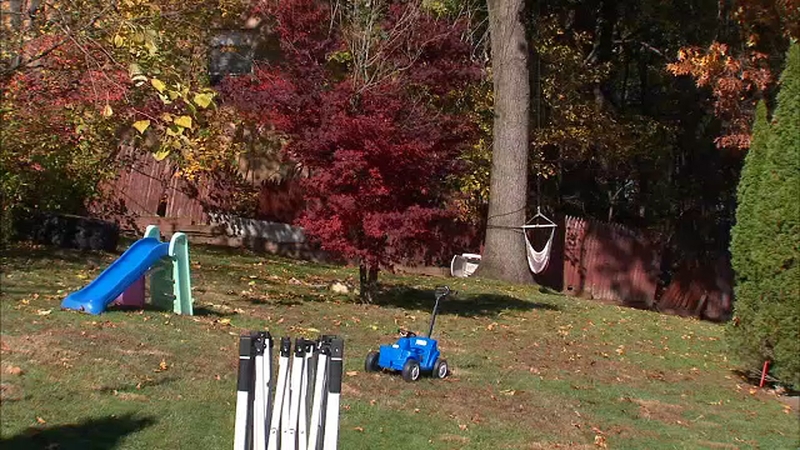 MAHWAH, New Jersey (WABC) -- It was the recipe for a tragedy - a century-old oak tree with a half dozen dead limbs looming over a yard where young children regularly play.

The property manager tried to do the right thing, hiring a tree surgeon to perform an operation of sorts. After more than three months and bunches of broken promises he finally went out on a limb and called 7 On Your Side for help.

"If a branch falls on them it could kill or injure them," property manager Charlie Coviello said.

It's a potential tragedy caused by six lifeless limbs, hanging more than 40 feet above the backyard of the house he rents and where his tenants' kids play.

"Somebody could be killed," Coviello added.

Last August, Coviello hired a tree surgeon to do a quick operation. He says he was asked for full payment, $719, up front.

"Spoke to the secretary who said the check wouldn't be cashed until the work was completed," says Coviello.

But Coviello says the check was cashed immediately. That was OK since work was scheduled, but the contractor never showed. Coviello then started emailing the contractor, who scheduled the work four separate times, each time, the contractor was a no-show.

"Every promise he's made, he didn't keep," says Coviello.

Renter Steve Guerra was instructed to keep his child out of the backyard for months.

"It was a back-and-forth thing. I mean you hear about it, but you never expect it to happen. I guess scammers are everywhere," said Guerra.

"I said, 'I warned you, if I don't do something, I'm going to 7 On Your Side.'" And that's just what Coviello did. So 7 On Your Side called the tree surgeon himself.

"The next day he was here," Coviello says. The contractor beat him to the house, before 8 the next morning. The contractor apologized, saying he usually never asks for full payments up front and this job 'slipped through the cracks.'

In just hours - all the dead and dangerous branches were gone.

"It's great," said Guerra. "'Cause it was a couple-of-months ordeal."

The big takeaways: When you hire a contractor, get more than one estimate - at least three is ideal. Coviello wasn't very selective -- he only got one.

Next, check credentials like licensing. Remember to NEVER pay in full up front. For a smaller job like this one, payment should have only been done upon completion.

If using the app, click here to send us a news tip
Report a correction or typo
Related topics:
societymahwahbergen county7 on your side
Copyright © 2021 WABC-TV. All Rights Reserved.
7 ON YOUR SIDE
What to know about holiday shipping deadlines, delays
Giving Tuesday: 7 On Your Side tips to avoid getting scammed
Cyber Monday deals: Strategies to shop and save big
Holiday shopping: Simple tips to avoid gift card scams
TOP STORIES
Mount Vernon Police focus of federal civil rights investigation
Columbia student dead, tourist wounded in random stabbings
Fugitive task force searches for parents charged in MI school shooting
Lindsay Lohan's mom sentenced in drunk driving crash
IKEA staff, customers have sleepover during snowstorm
FDNY probie firefighter dies after medical episode during training
Officer struck by alleged drunk driver released after weeks in coma
Show More
Burgeoning NYC photographer making name for himself in industry
Thief steals $72,000 in cash from NYC grocery store
Religious, non-public schools push back against new NYC mandate
Family says mysterious falling ice leaves gaping hole in roof
AccuWeather: Back to blustery
More TOP STORIES News
Send us your questions, issues, and story ideas to Nina by filling out the form above, by emailing 7OnYourSideNina@abc.com, or contact Nina on her Facebook page or tweet her at Twitter @7OnYourSideNY! You can also call the 7 On Your Side Hotline at 917-260-7697.