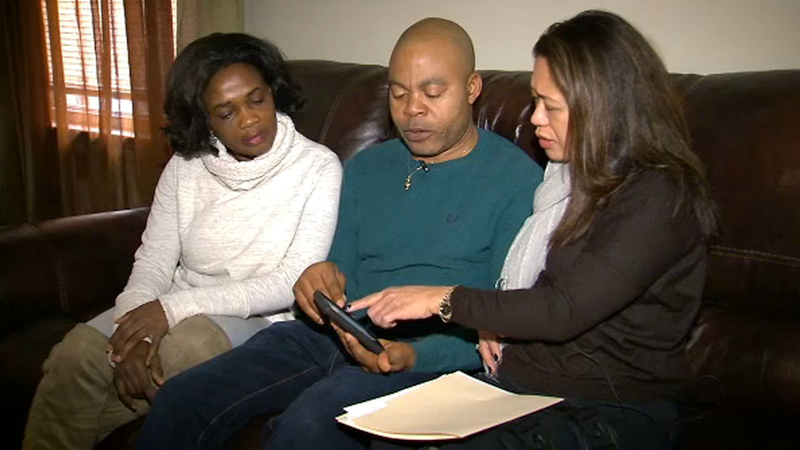 HILLSIDE, New Jersey (WABC) -- We've warned you about a scam called spoofing and offered tips how not to get tricked by phony callers masking their phone numbers. One local professor says he was spoofed, and it wound up costing him thousands in a sneaky scam resulting in bank fraud.

Victor and Rita Eromosele had to tell their three kids it would be a lean Christmas this year, after $2,500 was suddenly transferred out of his bank account on December 4.

It was news to the Eromoseles, since they've never done a transfer. But there it was, a debit via Zelle Transfer, the secure wire service top banks use for customers to safely send and receive funds. The Hillside, New Jersey, couple said they've also never used Zelle, but they say a scammer knew how, and in a few seconds with a single phone call.

The problem happened when Victor got a call from a hacker who spoofed his bank's caller ID and tricked Victor into thinking she was from his bank.

What the spoofer was really after was Victor's bank code, to complete the fraudulent transfer out of his account.

It seems like a hacker broke into the account, and they were doing something that triggered Bank of America -- the real BOA -- to send a text asking whether Victor requested the code.

The code was sent by Victor's bank via a legitimate text alert, with Bank of America asking him to confirm he wanted to make the transfer and urging him to call the bank if he didn't request the code. That was a mistake, worth thousands. Instead of hanging up and calling BOA, he gave the phony caller the key to his account. And minutes later, Victor said his money was gone. And by the time he called BOA and tried to stop it, it was too late.

"The money was already withdrawn," said Victor.
When they called the bank and tried to dispute the fraud, Victor's claim was denied, with the bank reminding that when a person gives out Online ID or Passcode to someone, it means they're authorized to perform that transaction.

"That's why I told my husband, hang up that phone," Rita said. "You should call 7 On Your Side."

We asked BOA to take a second look at the fraud claim, and within a few days, Victor and Rita's bank approved the claim, absorbing the loss and returning $2,500.
The big takeaway if someone calls you asking for your personal information, be skeptical. You should hang up and call the bank's number, listed on your statement, to verify. And if you experience fraud, report it quickly, within the 60-day window.

"We thoroughly investigate customers' fraud claims, but can't comment on individual accounts for reasons of privacy. Claimants should make every effort to share all pertinent information when they first initiate a claim so the bank can review all aspects of the situation. We have strong measures in place to protect our customers and systems. Customers also need to be vigilant in protecting their computer systems and account information. (Refer to information we have posted about securing information: BankOfAmerica.com)

If using the app, click here to send us a news tip
Report a correction or typo
Related topics:
personal finance7 on your sidescamidentity theft
Copyright © 2022 WABC-TV. All Rights Reserved.
7 ON YOUR SIDE
Restaurant loses weekend of business over untimely gas inspection
Tips winterize your home and keep gas, electric bills low
How to get reimbursed for at-home COVID tests
7 On Your Side: Tips for ordering your free at-home COVID tests
TOP STORIES
Winter Storm Update: Tracking the nor'easter
Widow delivers heart-wrenching eulogy for NYPD Detective Jason Rivera
Final farewell for NYPD Detective Jason Rivera
NY area urged to prepare for snow, wind as nor'easter approaches
Winter nor'easter: LIRR suspended Saturday, other mass transit info
'This is a big one': Murphy declares state of emergency in NJ
Connecticut braces for snowy winter nor'easter
Show More
Hochul extends NY mask mandate as Appellate Court hears case
Restaurant loses weekend of business over untimely gas inspection
Off-duty NYPD officer working security shoots man after stabbing
10 injured in PA bridge collapse; human chain formed to help
AccuWeather Alert: Nor'easter to bring heavy snow
More TOP STORIES News
Send us your questions, issues, and story ideas to Nina by filling out the form above, by emailing 7OnYourSideNina@abc.com, or contact Nina on her Facebook page or tweet her at Twitter @7OnYourSideNY! You can also call the 7 On Your Side Hotline at 917-260-7697.