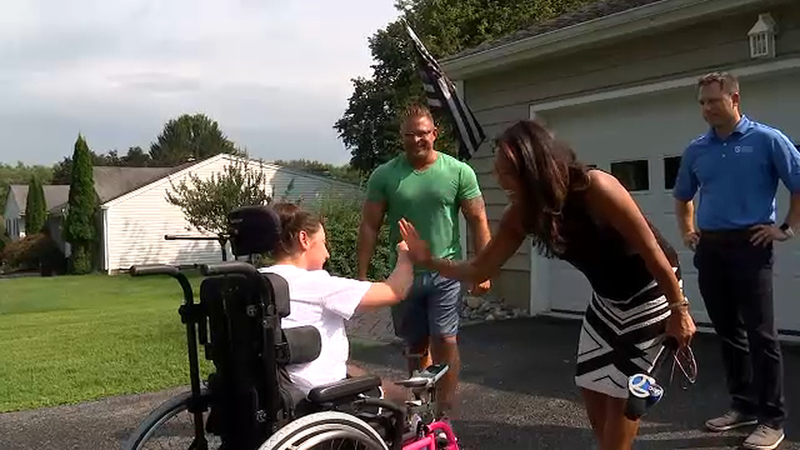 It was all to get an expensive new wheelchair for his daughter.

Like most 13-year-olds, Francesca Talamini has hit a growth spurt. She's outgrown her motorized wheelchair.

But when her dad, Victor Talamini, tried to order "Frankie" a bigger one - first, insurance said she's only eligible for a new wheelchair every three years.

"i waited until three years and two weeks and they came with a separate total excuse," said Victor.

Insurance said it already paid for a wheelchair, a manual one.

Frankie's dad has battled before. The Port Authority police sergeant took down a terrorist, tackling the man who detonated a pipe bomb inside a subway tunnel in 2017.

His daughter is a fighter too - Frankie and her twin sister Tori were born premature, weighing just over a pound each.

Frankie contracted MRSA in the hospital, a super bug infection which led to cerebral palsy.

They have appealed insurance four times asking for a bigger chair. Their pediatrician even stated a new power wheelchair was medically necessary. But all came back denied.

We contacted United Healthcare and the Port Authority. The insurance reconsidered, covering the $15,000 for the motorized wheelchair.

And we were there when Frankie got her new custom fitted wheels.

Thanks to both the Port Authority and United Healthcare who worked together to resolve this quickly.

They covered the motorized wheelchair worth $15,000 instead of the manual stroller that cost a lot less - about $2,000.

And thanks for MLB umpire and New Jersey native Phil Cuzzi, whose charity covered the $2,000 cost for the Talaminis.

Report a correction or typo
Related topics:
society7 on your side
Copyright © 2022 WABC-TV. All Rights Reserved.
7 ON YOUR SIDE
7 On Your Side helps grieving mom fight for daughter's death benefits
DoorDash customer gets more than Italian ice after hit and run
7 On Your Side tips to stretch your dollar and combat inflation
Queens baseball teams unable to use home field get new mound
TOP STORIES
EMT shot by drunk patient with taped-together gun: NYPD
9-year-old girl killed in NYC had bed dropped on head, prosecutors say
NY high court to determine if Bronx Zoo elephant is a person
Man walks at NYU graduation after bike accident left him in coma
2nd racist incident at NY high school sports event sparks outrage
Expert weighs in on when you can buy a car amid chip shortage
Kidnapped CA teen found in NY thanks to quick-thinking detective
Show More
What is monkeypox? What to know after US confirms 1st 2022 case
Gas approaching $5 per gallon in NY as record prices persist
No changes to NYC mandates; several NYC judges COVID positive
AccuWeather Alert: Wet start and a sunny afternoon
CDC investigating 4 suspected cases of hepatitis in NJ children
More TOP STORIES News