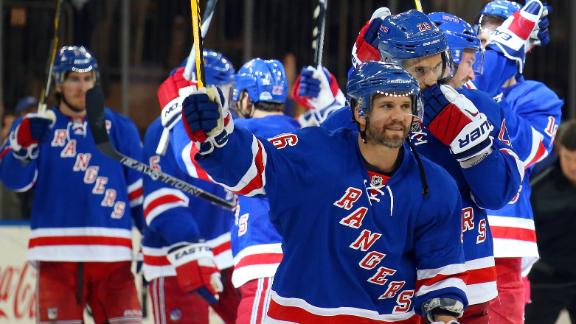 Well, gee, nothing to talk about with this year's Eastern Conference finals, right? Oh, my. Just 14 months after a mega-deal that saw captains swapped between these two teams, not to mention two key free agents leaving one for the other, the Tampa Bay Lightning and New York Rangers hook up with a Stanley Cup finals berth on the line. Which is why as much as we in the media, and by some extension the fans, will be fascinated by the central characters Martin St. Louis, Ryan Callahan, Brian Boyle and Anton Stralman. With so much at stake, the players themselves will be all business.

The Lightning won the season series 3-0-0, although all three games were played in the first half of the season, so I'm not sure just how much one can glean from that.

"They play their system really well," Rangers center Dominic Moore said of the Lightning after his team won Game 7 against the Washington Capitals on Wednesday night. "They're a well-coached team. They've got good depth. They're a well-rounded team. We played all three of the games against them a little bit earlier in the season, when he hadn't hit our stride, but they played us very well. They'll be a huge challenge and we're looking forward to it."

The series pits two franchises at different points in their growth, the Rangers very much all-in at the peak of their win window, as underlined by the farm they gave up for Keith Yandle before the trade deadline. The Lightning are just opening their window, really their first season of truly contending in what should be several years of doing so, barring salary-cap hurdles in keeping their young core together. As such, no question Tampa Bay is the underdog. It should be a blast of a series, either way.

Neither club has excelled in these playoffs in shot-attempt percentage, as both are at under 50 percent. It was a different story in the regular season, with the Lightning a top-five team in this category while the Rangers were 20th. Puck possession has been a tougher chore for the young Bolts in these playoffs, both the Detroit Red Wings and Montreal Canadiens taking time and space away from them at times and also bottling them up in their own zone for some. As always, playoff ice is harder to come by, but the Bolts in the end of both series found a way to adapt their style to the different standard of playoff hockey. Special teams always play a factor. Tampa Bay exploded for seven power-play goals on 20 chances against the Habs last round, a rousing 35 percent clip. It was a major factor in their six-game series win, especially when combined with the fact they gave up only one power-play goal to the Canadiens on their 16 chances. The Rangers have the top-ranked penalty killing unit of the four teams left standing, the Blueshirts absolutely shutting down the vaunted Caps power play last round, which was a major reason New York edged Washington.

The teams have a definite contrast in styles: the high-flying Lightning with all their skill up front against such a well-balanced, strong defensive Rangers squad that also skates well. Most people will pick the top-ranked Rangers, for sure.

I asked one Western Conference head coach if the Lightning could beat the Rangers. "Have to get through the defense, if they can get pucks deep and punish defense then yes," he responded via text message Thursday. "Tampa will play a stretch game and will need to not get bogged down in their own zone."

The Rangers use their team speed as much offensively as defensively to get back in coverage. The Rangers' back pressure and forecheck both could give Tampa fits. It will be an interesting battle of game plans.

That's the X's and O's. Now for the backdrop. St. Louis had a dramatic exit from his longtime team, asking the Lightning last season for a trade. Part of it was his anger at Tampa Bay general manager Steve Yzerman for not picking him for the original Team Canada roster, although St. Louis would end up replacing an injured Steven Stamkos and win gold in Sochi anyway. But the damage was seemingly done, his trade request coming before the Olympics, although not becoming public until afterward. It put Yzerman in a tough spot, and he made one heck of a trade, given that St. Louis, armed with his no-movement clause, wanted only to go to the Rangers. The whole thing was emotional and dramatic and bitter. So there's that.

Callahan sort of forced a trade when the former Rangers captain couldn't agree to terms on an extension. Just when exactly he'll play his former team in this series remains to be seen after he underwent an appendectomy Monday night. But the fact he skated with the team at practice Thursday is amazing in itself. That's one tough dude. He'll be hungry to have an impact against his former team, for sure. Coach Jon Cooper told reporters Thursday that he'll see how Callahan is feeling over the next two days before making the call for Saturday's Game 1 of the conference finals.

Then you've got Boyle and Stralman leaving the Rangers last summer after a trip to the Cup finals, the Blueshirts cap-strapped and unable to keep either, and the Lightning more than happy to give them a home. Stralman said after the Game 6 win over Montreal that he always had a feeling this season that the Rangers and Lightning would meet up eventually. And let's not forget veteran Dan Boyle, who played most of his 20s in Tampa Bay and won a Cup in 2004 with the Lightning -- along with St. Louis. It's a homecoming of sorts for Boyle as well, although he was knocked woozy and out of Game 7 by a thunderous hit from Brooks Orpik, so his availability is also to be determined. Still, there are all kinds of ties between these two teams, which adds a delicious layer to it all.

For the Lightning, you could really argue for either Ben Bishop or Tyler Johnson, maybe even Victor Hedman. Johnson's playoffs-leading eight goals have been huge. Hedman has been a Norris Trophy-caliber monster in the playoffs. But I'll give the nod to Bishop, who has shown so much in his first playoffs, especially standing out in Game 7 against Detroit and Game 6 against Montreal, when the chips were down. He beat Carey Price in Round 2, now he's got Henrik Lundqvist on his hands. Speaking of Lundqvist, I'll give him the nod as well as Rangers MVP. I mean, a .944 save percentage and 1.60 goals-against average? He was unreal against the Caps. King Henrik is playing his best when it matters most and that should surprise just about nobody.

Well, he's not so secret anymore but maybe for Rangers fans who haven't followed Tampa Bay much, they're about to find out who Nikita Kucherov is. The 21-year-old Russian winger has incredible hands and speed, scoring six goals in the second round against Montreal. He's part of the Triplets Line with Johnson and Ondrej Palat, which the Rangers will need to pay extra attention to. On the Rangers side, I know he has only two goals and one assist in 12 playoff games, but to me rookie Kevin Hayes could have a big impact in this series. He was outstanding in Game 7 against Washington, not just tying the score 1-1 for the Rangers but also being a constant threat on every shift.

I want so badly to pick the Lightning because I'm infatuated with the way in which they play the game: such a positive brand of hockey at a time when it appears the game around the league is regressing again. But I think the Rangers' experience will be a factor, as well as New York's ability to clog things up on Tampa Bay. Besides, I picked a Rangers-Blackhawks Cup finals before the playoffs (with Chicago winning) so I can't back away now. But let me just say that Tampa Bay winning this series would not shock me. Rangers in 7.