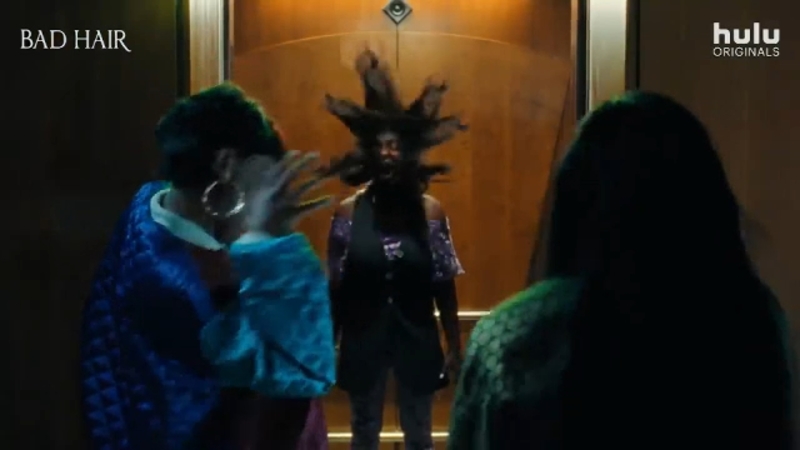 "Bad Hair" is part comedy, part horror movie, and it was well received at a midnight screening during this years Sundance Film Festival just before the pandemic began.

Starting Friday, October. 23, it's available to stream on Hulu.

The film is funny one minute and scary the next, a mash-up of several different genres that is very entertaining but also has a serious message underneath about the costs of conformity.

Elle Lorraine plays an ambitious young woman looking to get ahead at a video music channel in 1989. Her look leaves a lot to be desired to those in charge there, and she attempts to change it.

Come to find out, the hair has a mind of its own in a way that has to be seen to be appreciated.

The new movie is written and directed by Justin Simien, who also brought up the subject of African-American hair in his breakthrough movie, "Dear White People."

"Please stop touching my hair," a character in that film says. "Does this look like a petting zoo to you?"

The young woman at the center of his new movie is accused of having "Bad Hair."

"(The idea was to use) satire and fable to wrap in very real things that we go through," Lorraine said. "It's a horror film and it's hilarious, but it's something that will leave audiences talking."

The film is set in the same era when co-star Vanessa Williams came to fame, and she remembers the pressures to conform.

Williams plays a tough boss, while Laverne Cox co-stars as a manipulative stylist.

A recent article in the Hollywood Reporter talked about what it's like to be "unseen" on set with makeup artists and hair stylists who are not used to working with performers of color.

"Yeah, I've ended up having to go back and do my own hair after a professional tried to do something with it," Lorraine said.

Given that diversity remains an issue behind the scenes in Hollywood, this movie can offer a good example, as co-star Lena Waithe noted.

"The hair and makeup trailer on 'Bad Hair,' they all knew exactly when they were doing because they looked like us," she said.

The film has uncomfortable truths mixed in with big laughs, over the top action, and cringe-worthy moments.

The movie is on Hulu, which is controlled by Disney, the same parent company as this ABC station.
Report a correction or typo
Related topics:
arts & entertainmenthuluentertainmentmovie reviewsandy kenyon
Copyright © 2021 WABC-TV. All Rights Reserved.
More Videos
From CNN Newsource affiliates
TOP STORIES