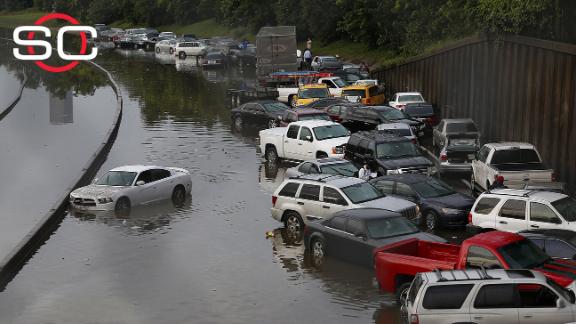 Houston Rocketscenter Dwight Howardhad no idea how prophetic he'd be.

Moments after the Rockets had avoided being swept in Game 4 of the Western Conference finals with a 128-115 victory over the Golden State Warriors, Howard summed up the evening in six words.

Hours later, he and hundreds of others still hadn't left the Toyota Center -- but only because it was the safe thing to do.

Fans were advised not to leave the arena near the end of the Rockets' win over the Warriors because of severe weather conditions in the Houston area. The team posted a message on the scoreboard with 2:23 remaining, saying "we recommend remaining in your seats until the weather passes."

For some, including Howard, that wait took longer than expected. As of 3:50 a.m. CT, about 200 people remained in the arena.

"I can't go nowhere, so I'm with the fans," Howard told reporters. "I hope everybody's safe right now and everybody stays off the streets."

The National Weather Service reported between 6 and 10 inches of rain had fallen in the Houston area Monday night, and authorities urged residents to stay off the roads -- including major interstates -- because of flash flooding as two bayous and other waterways had overflowed their banks.

Houston was under a flash flood watch until early Tuesday, forcing the NFL's Texans to cancel the first day of their organized team activities.

Howard, who lives outside of town, mingled, took pictures and signed autographs with fans well into the early hours of Tuesday morning.

Howard was still at the arena as of 2:15 a.m. CT. It was unknown what time Howard left the arena.

Game 5 of the best-of-seven series is Wednesday night at Golden State.