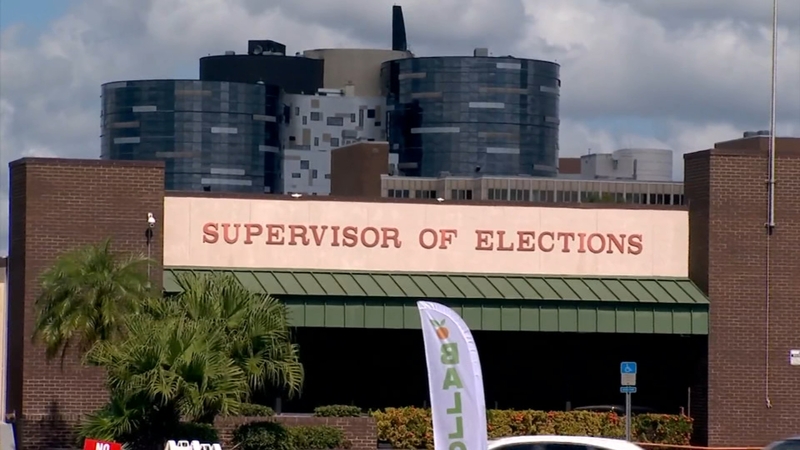 ORANGE COUNTY, Florida -- A pregnant woman was on her way to the hospital to give birth, but made a detour to cast her vote in the 2020 election.

The Supervisor of Elections Office said they've had a situation before where a father-to-be arrived at a voting location to pick up a ballot to take to the hospital for an expectant mother, but Tuesday was a first when a woman in labor stopped to cast her vote.

"She said, 'No, no, no. I need to fill it out right now,'" Orange County Supervisor of Elections Office employee Karen Briceño González said.

She said that was the reaction from the woman who was about to give birth after being told she could just mail the ballot before Nov. 3.

"It was an odd situation, but she wanted to vote and that was her right as an American citizen," González said.

"All of a sudden, I get a voter in front of me and he hands me two driver's licenses. He had been waiting in line and I came and told him, 'I need your driver's license for you to vote.' He says, 'No, you don't understand. I already voted,'" González said.

The man had already voted, but he said his wife had not and she was waiting in the car for her ballot.

"I said that we needed her here, and he basically told me that was going to be a problem," González said. "He said she refuses to go to the hospital until she votes."

González said she stepped outside the building and noticed his wife was in labor.

"She was calm. The husband was a bit more nervous," González said. "We want to facilitate every other voter that is eligible to vote, the right to vote no matter their circumstances, no matter the situation. I understand the importance of this election to some people. I gave her a voting sticker and she was on her way to the hospital. She was very happy that she got to vote."

González said she and other poll workers would love the reunite with the pregnant woman after the election.

"I hope that the baby is safe and they are assured that their ballot was put in the ballot box and that their vote will be counted," González said

Staff at the Supervisor of Elections Office are planning to get the baby a onesie with the words "First Vote" on it and a sticker that says "Future Voter."
Report a correction or typo
Related topics:
societyfloridavotingvote 2020pregnancy2020 presidential electionu.s. & worldpregnant woman
Copyright © 2021 KTRK-TV. All Rights Reserved.
TOP STORIES
Officials urge riders to stay alert amid rise in NYC subway crime
Should you be concerned over facials recognition cams?
Connecticut online sports betting gets fully underway
Passengers do nothing as woman is raped on train, police say
AccuWeather: Breezy & mild after chilly start
COVID Update: Cases down 50% since beginning of September
Video: Wild shooting hits several cars on Bronx street
Show More
Tractor trailer crashes and burns on NJ Turnpike
Bicyclist killed after being hit by SUV in NYC
Gabby Petito's parents speak out about Brian Laundrie
NYC commission votes unanimously to move Jefferson statue
Discipline recommended for 65 cops for conduct during NYC BLM protests
More TOP STORIES News