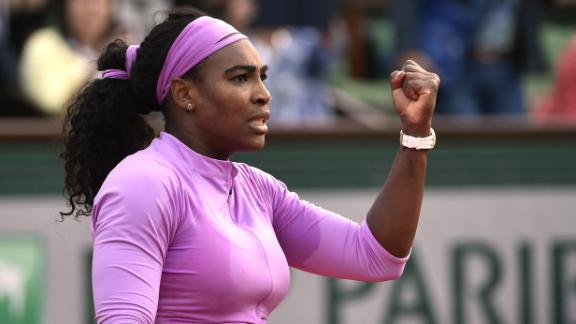 PARIS -- At the outset, Serena Williams was grimacing and cursing and, worst of all, losing by a lot.

Then, suddenly, the 19-time Grand Slam singles champion was putting shots right where she wanted, imposing her will as only she can. And the only anger Williams displayed was directed at her opponent, Victoria Azarenka, while they traded gestures and words over the chair umpire's decision to replay a key point.

By the end, when she was aggressively grabbing the final six games and 10 of the final 12, all that really mattered was that the No. 1-ranked Williams was not going to let this one get away. Williams erased deficit after deficit and beat former No. 1 Azarenka 3-6, 6-4, 6-2 Saturday in a third-round French Open match filled with momentum swings and one GIF-ready contentious exchange.

She rarely does. Williams is 26-1 in 2015, 9-0 in three-setters. The American improved to 50-11 at Roland Garros, making her the first woman since 1968, when Grand Slam tournaments admitted professionals, to have that many wins at each major.

She's never been as comfortable or confident on the French Open's dusty red clay as with grass or hard courts underfoot, exiting in the second round last year and the first in 2012. She only has been past the quarterfinals once in the past 12 years in Paris -- in 2013, when she won her second French Open title.

Compare that to the 33-year-old's trophies elsewhere: six apiece from the Australian Open and U.S. Open, five at Wimbledon.

Azarenka owns a pair of Australian Open trophies. She also was twice a U.S. Open finalist, but lost each to Williams, who has won 16 of their 19 matchups. They tend to be close as can be: This month on clay in Madrid, Williams won after Azarenka double-faulted three times while serving for the match.

So maybe that collapse and Saturday's, when Azarenka led by a set and 4-2 in the second, are an indication that Williams holds an edge in more than shotmaking. She produced nearly twice as many winners as Azarenka, 41 to 21.

"She really stepped it up," the 27th-seeded Azarenka said. "Nobody is probably harder ... for me to play against."

On the last point of the second set, Azarenka hit a shot that landed near the baseline. Williams netted a response at about the same time an "out" call came. Chair umpire Kader Nouni decided the point should be replayed, which Azarenka disputed. She and Williams wound up looking at each other, and Azarenka waved her hand, as if to say, "Eh, never mind." Williams then appeared to tell Azarenka not to wag her hand.

Azarenka, who still was steamed about Nouni's ruling after the match, lost the replayed point, giving Williams the set, and was warned for a visible obscenity.

Azarenka headed to a bathroom break. When she returned, she took a 2-0 lead in the third set.

The two are friends away from the court, and Azarenka said later: "We don't have any air to clear. But I gave her a pair of my shorts because she really liked them. True story."

In the fourth round, Williams will face the other remaining U.S. woman, 40th-ranked Sloane Stephens.

The most significant victory of the 22-year-old Stephens' career came when she reached her only Grand Slam semifinal by beating Williams at the 2013 Australian Open. Later that year, Stephens found herself in a bit of a brouhaha over less-than-flattering comments she made to a reporter about Williams.

Other fourth-round matchups: No. 4 Petra Kvitova vs. No. 23 Timea Bacsinszky, No. 17 Sara Errani vs. Julia Goerges, and 93rd-ranked Alison Van Uytvanck vs. 100th-ranked Andreea Mitu.