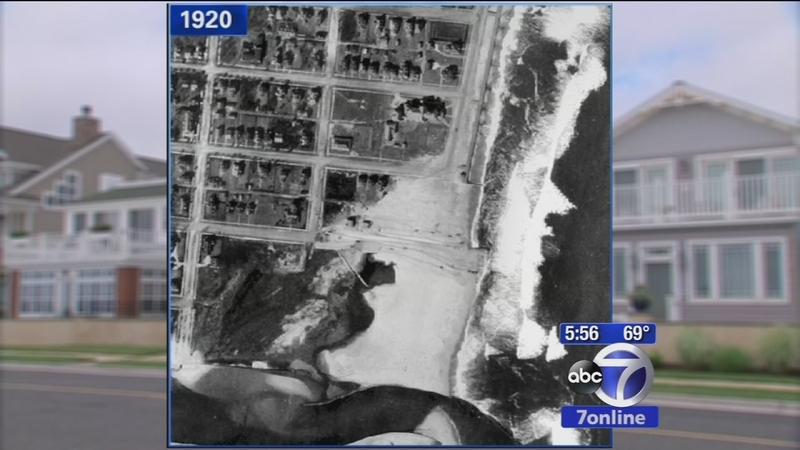 Woman discovers she doesn't own the land her house is on

AVON, N.J. (WABC) -- Blind-sided and bewildered. That's what how one New Jersey homeowner says she's feeling after getting shocked with the news that she doesn't own the land her house has stood on for generations.

"It's horrible. It's absolutely horrible." Missy Peters is talking about the shocking news her mom got she doesn't own the land her family's house was built on.

For nearly half a century Margaret Codey's raised her family on this idyllic beach-front home. Now, this former realtor and current empty-nester wants to downsize and sell her homestead. But just days before closing, the buyer found New Jersey has claim to her land.

"The state is saying it owns 89 percent of the land," Codey said.

The map from the state shows she only owns a sliver of her property.

"Which piece is yours?" 7 On Your Side's Nina Pineda asked.

"From the garage to about here," Codey said.

The reason? Nearly 100 years ago as seen in this aerial map water, at high tide, water used to flow from the Shark River onto the area where Margaret's house would once stand.

In the 30's the bulkheads were bult to hold back the tides and Margaret's home was built. Left behind was a bill for the tidelands, apparently never paid to the state.

"The money involved could be astronomical," said Missy, who is helping her mom resolve this issue.

"It could be in the hundreds of thousands?" Pineda asked.

"It could be correct," said Chris LaMonica, an attorney.

LaMonica specializes in tidelands claims, affecting all but three counties across the state. Even properties inland could owe the state when sold, a big surprise to condo owners in well populated places like Edgewater, Hoboken, and others.

"Jersey City. This affects a lot of people. It's extensive," said LaMonica.

LaMonica says the process to clear up claims takes up to a year and a half. The delay's already scuttled Margaret's sale. The unanswered question she has for the state.

"If the state says I own it, why was I never notified? How can this be?" Codey said.

7 On Your Side asked that very question, why doesn't the state notify homeowners. The state's regulatory agency, the Department of Environmental Protection, couldn't give us an answer.

The DEP rep said they haven't seen a big problem with homeowners on this issue. And they're simply enforcing the laws of the state. But there is something you can do about it, you can pay for a tidelands survey about $35, to see if you have a potential problem. It's better than waiting until you're selling.
Related topics:
home & gardennew jerseyhousinghome7 on your side
Copyright © 2021 WABC-TV. All Rights Reserved.
7 ON YOUR SIDE
NJ storage customers will be allowed in their Ida-flooded units
Giants legend calls 7 On Your Side to help tackle storage frustration
Renters outraged storage unit disposing belongings after Ida flooding
7 On Your Side helps recover $500,000 for retired couple
TOP STORIES
Man with 37 priors arrested in case of woman chased to NYC apartment
Slain NYPD detective's 'miracle baby' to receive full benefits
Adams plans to preserve NYC gifted program
NJ storage customers will be allowed in their Ida-flooded units
Making Strides Against Breast Cancer walks kick off Sunday
AccuWeather Alert: Late rain to bring cooler temps
Plane makes hard landing on Long Island beach; All passengers ok
Show More
NY high school closed until January as tests find mold, asbestos
Woman dragged by bright red van that fled NJ supermarket lot
Woman caught on camera dousing Yeshiva with gas, lighting it on fire
Nearly 100 rattlesnakes found living under Calif. home
Artists hope to connect people through large scale murals in NYC
More TOP STORIES News