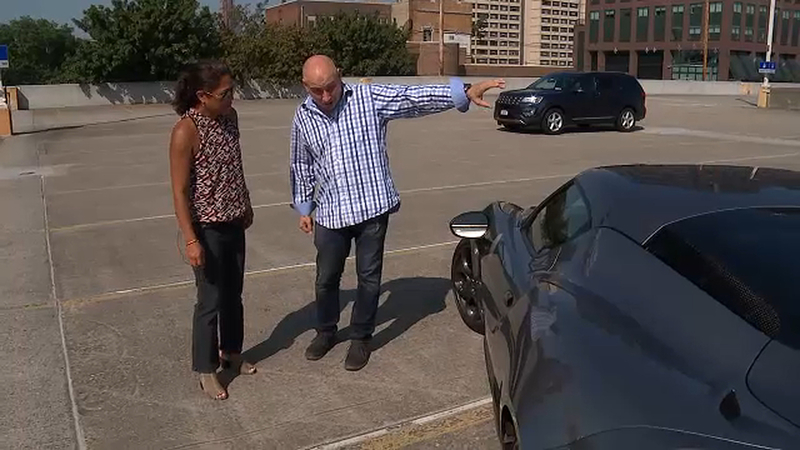 JERSEY CITY, New Jersey (WABC) -- A high-end car was smashed up by a Fresh Direct delivery truck and the crash was caught on camera. But despite the video evidence, the company hadn't paid up for damages until 7 On Your Side stepped in to help.

"The truck backed into it, pushed the whole car into the curb," said Bob Aiello. His Alfa Romeo 4C turbo took a direct hit from a Fresh Direct truck and the entire incident was caught on security camera video outside a Queens restaurant last June.

The driver never got out and just took off, leaving behind over $17,000 in damage.

Bob and his girlfriend Lori Greendale manage a fleet of fun and exotic cars, renting the vehicles out on the Getaround car-sharing app.

"Since I managed this car it was difficult because it wasn't renting and we were losing all that money." said Lori.

"That was my biggest fear, that in peak season that this would be in the shop for 5-6 weeks not earning anything," said Bob.

So they fixed the car out of pocket - asking Fresh Direct to be reimbursed.

Since the truck driver was 100 percent to blame, Bob asked for and got more than just the damage. Loss of use and diminished value is a way to recoup some money since the car is worth less now due to the accident.

But more than a month after sending in the notarized agreement to Fresh Direct's claim company, they still didn't have the check.

So we contacted the delivery company which "regretted the unfortunate damage and delay." Within a day a check was FedExed for $22529.84.

"Thank you so much. this is amazing how did you this," said the relieved couple

The big takeaway: The only time you can ask for diminished value is if the damage to your car is 100 percent not your fault.

If you want it, you have to prove your ride devalued, in writing. One way to go is bring the car back to your original dealer and get a letter stating what the car is worth now that Carfax has an accident on it.

But prepare to fight for it. If your insurance company doesn't help you can negotiate this on your own with the other party, like Bob did.