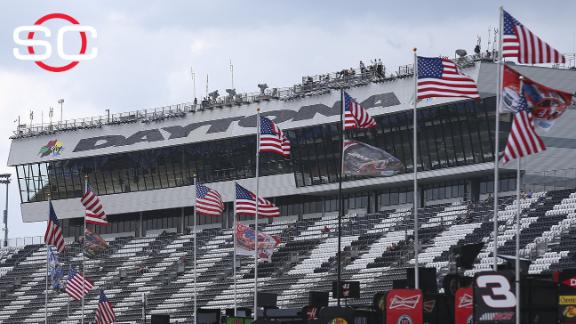 DIS President Joie Chitwood said Tuesday that because fans had purchased tickets and the event is so close to happening, he would not change the flag policy for this weekend. He said the track will offer United States flags in exchange for Confederate flags.

"We want to be inclusive to everyone, and the last thing you want is for anyone to come to a sporting event and really not enjoy that experience because of symbols that really represent things we're not proud of," Chitwood told reporters after a news conference to announce a new track sponsor.

"For us, we're celebrating the American flag this weekend. It's our nation's birthday. ... Going forward, we'll really have to look at where that other flag goes, because it doesn't have a place in our sport and we've got to take a thoughtful process on how we get to that place."

NASCAR chairman Brian France said last week that he would work with the tracks -- Daytona, like many tracks, is owned by the France family-controlled International Speedway Corp. -- to see what they can do to eliminate the flag from the infield. NASCAR already bans the flag from any official areas of the tracks -- race cars, programs, signage, etc., and in 2012 nixed plans for golfer Bubba Watson to drive his General Lee car from the "The Dukes of Hazzard" during a prerace event because of the Confederate flag on its roof.

A sport with its roots in the South -- Darlington Raceway called one of its races the Rebel 500 up until 1982 and at times included the Confederate flag on the program cover and in Victory Lane -- has long distanced itself from it. But with national attention on the appropriateness of the flag after nine people were slain June 17 at the Emanuel AME Church, France stated NASCAR would try to do more and be as aggressive as possible to eliminate it from the infield.

"We have been clear in support of this position throughout our industry and to those across the country who have called for the eradication of the Confederate flag," France said Saturday. "We will be as aggressive as possible to disassociate NASCAR events from an offensive and divisive symbol. We are working with the industry right now to achieve that goal."

NASCAR and the tracks have not banned the flag in the past, citing freedom of expression. Chitwood said any change in policy and trying to enforce a ban would not happen this weekend, but he did not rule out a ban for future races.

"At this point, with the late nature where we are, we cannot ban anything and cannot change our policy, but needless to say, there is a lot of discussion on how we get there and what we can do in the future to make sure we celebrate all that's right in this country," Chitwood said.

"[Banning it] is definitely an option that we have to look at, but also understanding the nature of our event, and when you have people that actually have purchased tickets, they're attending and in terms of policies that are in place when they purchase their tickets -- all those elements come into play. We want to do what's right. But we have to be thoughtful and have a good plan to get there where it's appropriate for everyone."