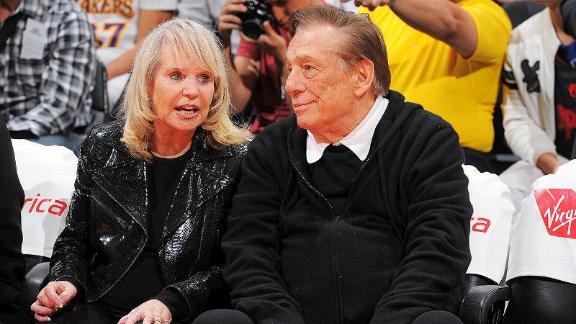 As Shelly Sterling received bids and continued to move aggressively to sell the Los Angeles Clippers, her estranged husband, Donald Sterling, refused to budge from his vow to fight the NBA's charges to terminate his ownership and force a sale of the team.

Shelly Sterling and her advisers received a handful of bids for the team Wednesday -- with sources saying the bids are well more than $1 billion -- in what is turning into a rush to find a buyer for the franchise before Tuesday's Board of Governors meeting at which both of the Sterlings' ownership interests could be terminated.

Reaching a sale agreement before Tuesday could be advantageous to the Sterlings because they could be part of the negotiations and even negotiate payment terms to potentially reduce their huge capital gains tax liability, which currently stands at 33.3 percent of the difference between the $13.5 million Donald Sterling paid for the team in 1981 and the final sale price.

If 75 percent of the league's owners vote to strip the Sterlings' ownership group, the Sterlings no longer can control the sale or the terms, although they would be entitled to the proceeds.

Despite the pace of the sale and seriousness of the buyers -- sources said bidders were asked to post a $300 million deposit -- Donald Sterling's continuing opposition is beginning to worry several groups. The concern, one source with knowledge of the situation told ESPN, is that he is using this sale process to establish a value for the team so he later can sue the league for damages if forced to sell.

In the books given to prospective buyers, sources said, Shelly Sterling has offered to sell 100 percent of the team, which has been an important condition for the NBA.

The franchise and the team's recently built practice facility in Playa Vista, California, are part of the sale, sources said. However, the winning bidder theoretically could prefer to lease the facility from the Sterlings, a source said.

But while Shelly Sterling and her advisers have pressed to sell the team at an accelerated pace, Max Blecher, the attorney for Donald Sterling, told ESPN that his client has no intention of selling and has only grown stronger in his resolve to fight the NBA's charges against him.

"He wants to retain the team and fight the NBA charges," Blecher said.

Asked about a letter from Sterling's personal attorney sent to the NBA on May 22 that states Sterling "agrees to the sale of his interest in the Los Angeles Clippers" and confirms he authorized his wife to negotiate with the NBA "regarding all issues in connection with a sale" of the team, Blecher said his client had changed his mind since then.

"On May 22, that's what he wanted to do," Blecher said. "But as time has evolved, he's come to a much more hard-line position.

"The May 22 letter was something he wouldn't think of doing today. It's an evolutionary process; he's gone from 'shock and awe' to 'go get 'em and kill 'em.'"

A reporter from Los Angeles television station KTLA visited Blecher's office Wednesday and took a photo of a document that appeared to be a lawsuit against the NBA. Blecher told ESPN late Wednesday evening that the document was "just a work sheet" and "not an official document."

"It has not been filed anywhere," he said. "It was just a piece of paper in my office. There has been no final decision made on filing a lawsuit against the NBA."

Blecher said he spoke to Sterling three times Wednesday to discuss his position. Asked whether Donald Sterling might relent and sell the team if Shelly Sterling is indeed able to secure a bid before Tuesday's hearing, Blecher said, "I don't know."

"I would suggest he take her to dinner and see what happens," he said. "If I were to judge by his attitude in our three conversations today, I'd say no. But you don't know what a woman can do.

"I don't think that money is the issue to him. It may be for her. He's worried they've ruined his image for 35 years and he's not going to sit still for it."

Shelly Sterling has retained Bank of America to handle the sale. Initial bids were due Wednesday. However, a source told ESPN that several groups were given an extension until Thursday. While there was initially a sense that there would be several rounds of bidding, it now appears the strongest bidders will simply negotiate directly with Shelly Sterling and her advisers over the next few days.

"There's no time for multiple rounds," a source connected with one of the groups told ESPN on the condition of anonymity.

In addition, billionaire and former Microsoft CEO Steve Ballmer is said to be involved in the bidding.

The Clippers would be so fortunate to get Steve Ballmer as owner. He's a great competitive force & would bring big energy to the LAC fanbase

- Pete Carroll (@PeteCarroll) May 28, 2014Ballmer told The Wall Street Journal earlier this month that, should he obtain the Clippers, he would not attempt to move the franchise from Los Angeles, saying that would be "value destructive."

The NBA released a statement saying its advisory and finance committee met via conference call Wednesday, plans to review all documents and still intends to vote Tuesday on the matter.

Sources told ESPN that bidders have been encouraged to finance as little of the deal as possible. Because of the well-heeled nature of the bidders, it's believed the winning bid could be paid for with at least 80 percent cash and less than 20 percent financed. This would make bids easier to evaluate more quickly.