Rafael Nadal wins, has aching back 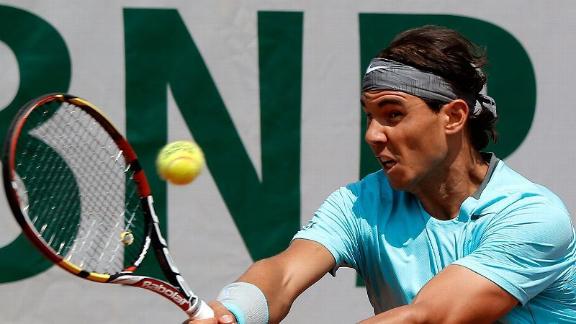 Afterward, Nadal thanked the Court Philippe Chatrier crowd in French for supporting him and told them "a lot of memories come through my mind" whenever he plays in that stadium.

Nadal revealed after the match that his back is bothering him and forcing him to hit slower serves.

"During my career, I had (a) few problems. ... Hopefully will not be (the) case" the rest of the way in Paris, Nadal said.

"I served more slowly since I started feeling the pain," he said, noting that he's worn tape on his back for extra support.

Later Saturday, the third-round match between Wimbledon champion Andy Murray and 28th-seeded Philipp Kohlschreiber was suspended at 7-all in the fifth set because of fading light.

There are no artificial lights at the clay-court Grand Slam tournament. The match will resume Sunday, with No. 7 Murray serving.

Murray -- who got both upper legs massaged by a trainer during fifth-set changeovers -- twice was two points from victory while leading 6-5 as Kohlschreiber served, but couldn't get closer.

Kohlschreiber then held a break point at 6-all that Murray erased with a backhand winner.

The match between Richard Gasquet and Fernando Verdasco was also suspended with Verdasco leading 6-3, 6-2, 2-2.

The last time Nadal won 31 in a row in Paris, he failed to get No. 32, losing in the fourth round in 2009 to Robin Soderling. That remains the Spaniard's only defeat in 63 matches at the tournament.

He has dropped only 19 games this year, heading into a match against 83rd-ranked Dusan Lajovic of Serbia, who is in only the second Grand Slam tournament of his career and beat Jack Sock of the United States 6-4, 7-5, 6-3.

Before this French Open, the 23-year-old Lajovic had a 10-21 career record in tour-level matches, never winning two in a row.

The top-seeded Nadal made only 10 unforced errors against Mayer -- two in the first set, three in the second and five in the third. Still, there were moments when the match was far closer than the final score indicates, including when Mayer was serving at 5-all, deuce, in the second set.

After Mayer's forehand sailed long to set up a break point, Nadal converted it by stretching to scoop a backhand lob. As Mayer watched the shot sail overhead, he waved his left hand to signal to the ball to go out, then rolled his eyes when it curled in. At the other end, Nadal pumped his fist, ahead 6-5 in that set and well on his way to reaching the fourth round for the 10th time in trips to Roland Garros. Roger Federer, who won his third-round match Friday, is the only other man to make it to the final 16 in Paris that many years in a row.

The 83rd-ranked Lajovic saved 8 of 9 break points he faced against the 75th-ranked Sock, who was born in Nebraska and was trying to join John Isner as the first American men in the fourth round at Roland Garros since 2010.

Before this French Open, the 23-year-old Lajovic had a 10-21 career record in tour-level matches, never winning two in a row.

Fellow American Donald Young was thwarted in his comeback attempt by Guillermo Garcia-Lopez, who beat Young 6-2, 6-4, 2-6, 6-7 (4), 6-4 to advance, making Isner the only American man in the fourth round.

The 41st-ranked Garcia-Lopez, who surprised No. 3 Stan Wawrinka in the first round, is in the final 16 at a major tournament for the first time.

Young, who is from Chicago, was trying to pull off his first victory in a match after dropping the first two sets, but Garcia-Lopez closed it out after more than 3½ hours.

Ferrer improved to 7-0 against Seppi, winning all 15 sets they've played. Ferrer, who has lost a total of 26 games through three matches this year in Paris, will face No. 19 Kevin Anderson of South Africa for a place in the quarterfinals.

Anderson advanced when Ivo Karlovic retired after one set Saturday because of a bad back.

Murray-Kohlschreiber Suspended
Darren Cahill discusses the Andy Murray-Philipp Kohlschreiber match that is suspended in the fifth set tied at 7-all.