WABC
ATLANTA (WABC) -- The brief, chaotic life of Bobbi Kristina Brown was never really her own.

Born and raised in the shadow of fame and litigation, shattered by the loss of her mother, Whitney Houston, Bobbi Kristina was overwhelmed by the achievements and demons of others before she could begin to figure out who she was.

Her demise was the most awful inheritance of all.

Bobbi Kristina died on Sunday at Peachtree Christian Hospice in Duluth, Georgia, about six months after she was found face-down and unresponsive in a bathtub in the suburban Atlanta townhome she shared with Nick Gordon, the man she called her husband. She was 22-years-old.

"Bobbi Kristina Brown passed away July, 26 2015, surrounded by her family. She is finally at peace in the arms of God. We want to again thank everyone for their tremendous amount of love and support during these last few months," Kristen Foster, a representative for the Houston family, said Sunday.

Police said she was found Jan. 31 in the suburban Atlanta townhome she shared with Gordon.

Authorities say the initial portion of the autopsy has been completed and did not show an obvious underlying cause of death and no significant injuries were noted. No previously unknown medical conditions that could have contributed to death were identified. Additional laboratory testing will be performed, officials said. Test results and a final determination of the cause of death is not expected for several weeks.

The medical examiner says interpreting autopsy findings will also be challenging, but said it could be helpful to address questions about what caused her to become unresponsive.

Bobbi Kristina was the only child of Houston and singer Bobby Brown.

She was hospitalized for months in Atlanta - eventually being placed in hospice care - after being found in a manner grimly similar to the way her megastar mother died three years earlier. The police report called it a "drowning," and Gordon said at the time it seemed she wasn't breathing and lacked a pulse before help arrived.

Brown - the sole heir of her mother's estate - did have dreams.

She identified herself on Twitter as "Daughter of Queen WH," ''Entertainer/Actress" with William Morris & Co., and "LAST of a dying breed." She told Oprah shortly after her mother's death in 2012 that she wanted to carry on her mother's legacy by singing, acting and dancing. But her career never took off. Actor and producer Tyler Perry said she had a future as an actress after her debut on his TV show "For Better or Worse" in 2012, but she only appeared in one episode. Aside from two ill-fated reality TV shows and the occasional paparazzi video, her image mostly showed up in the "selfies" she posted online. 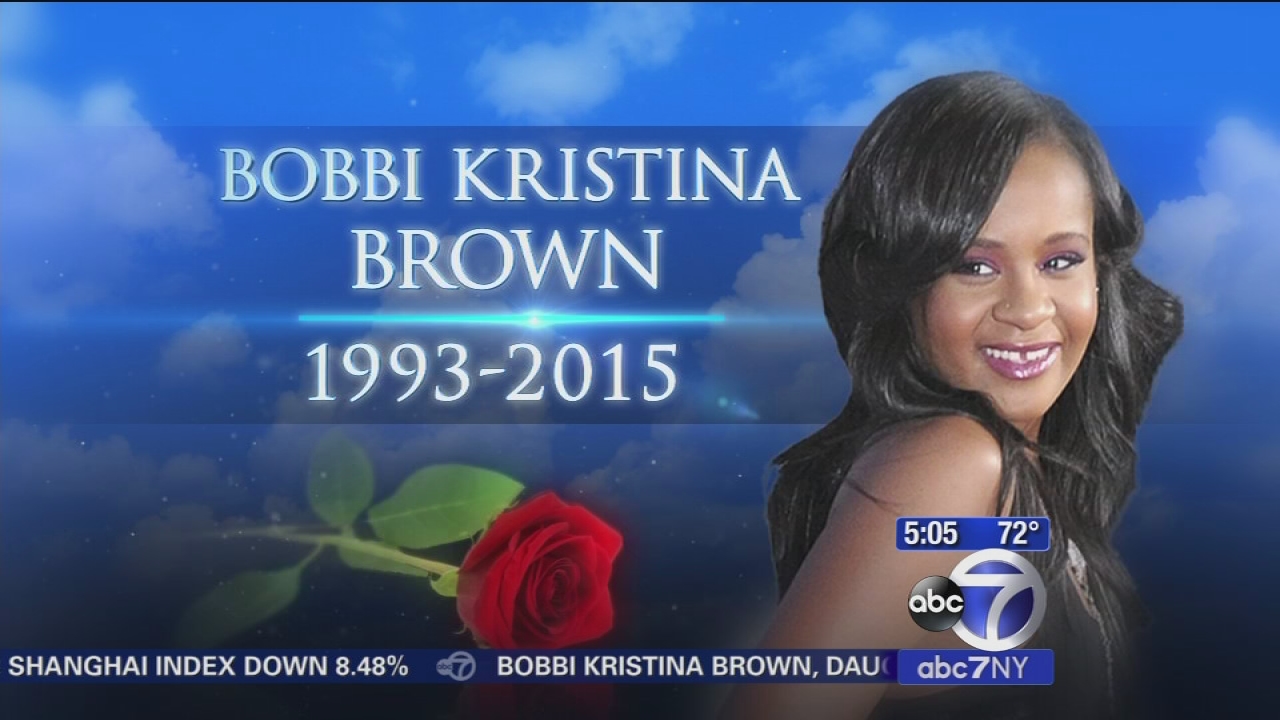 Tributes pour in for Bobbi Kristina Brown
Dray Clark reports from Newark on the reaction to Bobbi Kristina's death
She attended award shows and appeared on red carpets with her mother and father. She performed a duet on TV with her mother in 2009, singing "My Love Is Your Love" in New York's Central Park. She became social media sensation, sending more than 11,000 tweets and attracting 164,000 followers.

As the news of her death spread across social media, several celebrities tweeted their condolences.

Grammy-winning performer Missy Elliot tweeted, "My heart is truly heavy. May u rest in peace with your mommy #BobbiKristina sending prayers 2 the Brown/Houston family."

"RIP #BobbiKristina My deepest sympathies 2 your father #BobbyBrown n your GrandMa #CissyHouston We will miss ya 4sho darling ;) Actress Vivica A. Fox said on Twitter.

Whitney Houston, known as "America's Sweetheart," was an impossible act to follow.

The late singer sold more than 50 million records in the United States alone during her career. Her voice, an ideal blend of power, grace and beauty, made classics out of songs like "Saving All My Love For You," ''I Will Always Love You" and "The Greatest Love of All." She earned six Grammys and starred in the films "The Bodyguard" and "The Preacher's Wife."

Bobby Brown had a bad-boy image but also became a huge star, selling platinum records with New Edition and going solo before drugs and legal woes derailed his career.

Bobbi Kristina appeared alongside both parents in 2005 on the Bravo reality show "Being Bobby Brown," which captured her parents fighting, swearing and appearing in court. The Hollywood Reporter said it revealed that Brown was "even more vulgar than the tabloids suggest," and managed "to rob Houston of any last shreds of dignity."

Years earlier, as Houston was preparing to give birth to Bobbi Kristina, she expressly left Bobby Brown out of her will, putting everything in a trust "for the benefit of her children and more remote descendants," according to the Houstons' 2012 petition.

After their divorce in 2007, Houston kept custody of Bobbi Kristina and raised her alongside Gordon, an orphan three years older than her daughter. Houston brought Gordon into her family, and while she never formally adopted him or included him in the will, both teenagers called her "mom."

The threesome's tight bond was shattered when Houston's assistant found the singer's lifeless body face-down in a foot of water in her bathtub at the Beverly Hills Hotel just before the Grammy Awards in 2012. Authorities found prescription drugs in the suite, and evidence of heart disease and cocaine in her body, but determined that it was an accidental drowning.

Bobbi Kristina, then 18, was at the hotel and became so hysterical she had to be hospitalized. "She wasn't only a mother, she was a best friend," she told Winfrey.

She and Gordon then went public with their romance, posting defiant messages online after the tabloids accused them of incest.

The Houstons tolerated their relationship, appearing with them on television that year in Lifetime's reality show "The Houstons: On Our Own."

But in one telling episode, the late singer's relatives lectured the pair about drinking after they show up in an obviously altered state, and accuse Gordon of failing to take care of the grieving girl.

Relations between Gordon and some other relatives continued to sour over the past year after Bobbi Kristina was hospitalized. A protective order barred him from being within 200 feet of Pat Houston, Bobbi Kristina's aunt. A feud erupted over whether Gordon could visit Bobbi Kristina while she stayed in the hospital.

On June 24, Bobbi Kristina's court-appointed representative sued Gordon, accusing him of misrepresenting his relationship with Bobbi Kristina. The complaint accused him of being violent toward her and taking more than $11,000 from her account while she was in a medically induced coma after the Jan. 31 tragedy.

Bobbi Kristina was fabulously wealthy for a teenager, but her money was in a spendthrift trust, designed to keep creditors and predators from taking advantage of people who can't manage their money. Bobbi Kristina's grandmother, Cissy Houston, and aunt, Pat Houston, eventually took over control of the trust and then took Bobbi Kristina to court to protect the estate.

The Houstons called Bobbi Kristina "a highly visible target for those who would exercise undue influence over her inheritance and/or seek to benefit from (her) resources and celebrity," and urged a judge to delay how quickly she could control the money.

Bobbi Kristina agreed to the delay, and the judge granted their request to seal the case.

The size of Houston's estate is a privately held secret.

In May, a judge appointed Bobby Brown and Pat Houston as co-guardians of Bobbi Kristina, giving them joint responsibility in decisions related to her care and medical needs. Lawyer Bedelia Hargrove was appointed conservator to oversee Bobbi Kristina's assets, including her rights and legal claims.

Houston signed a $100 million record deal in 2001, but failed to deliver, and lost two homes to foreclosure toward the end of her life. But her early death revived a hunger for her music, and her name and likeness generated revenue that became part of Bobbi Kristina's inheritance.

By January 2014, the young couple who grew up as brother and sister were sharing a townhome in Roswell, Georgia, and calling themselves husband and wife.

They posted images of their hands wearing wedding rings, with the caption "#HappilyMarried. So #InLove. If you didn't get it the first time that is." They got identical "WH" tattoos with flying doves on their wrists, and Gordon added a large portrait of Houston's face on his arm.

"Damn, lol, it's incredible how the world will judge you 4ANY&EVERYthing," Bobbi Kristina tweeted at the time.

By last September, Pat Houston said she was "very proud of Krissy."

"Young people today are up against so much with social media and everything else that presents itself to them," Pat Houston told The Associated Press. "We try to be there for her, just to try to guide and direct her." 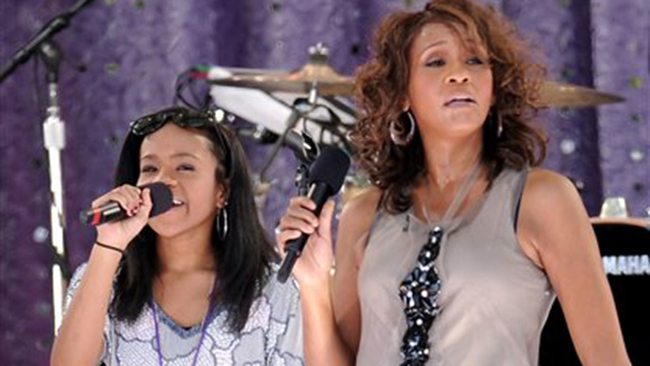