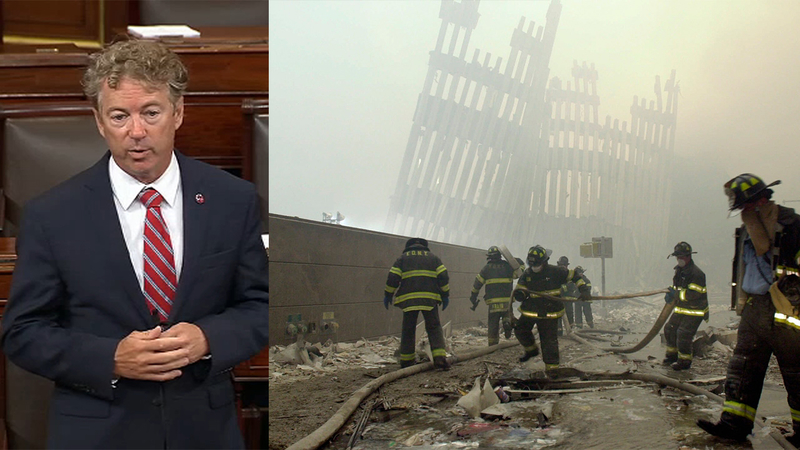 WASHINGTON, D.C. -- A day after Republican Sen. Rand Paul blocked a vote on it, the Senate has reached an agreement to vote on the House-passed 9/11 victim compensation fund bill next Tuesday.

At a news conference on Thursday, Sen. Kirsten Gillibrand, D-N.Y. said it is "so long overdue."

"There are no more excuses. We have to finish this job and now on Tuesday we will have the chance," she said.

On Wednesday, Sen. Paul had objected to a request by Gillibrand to approve the bill by unanimous consent, which would fast-track approval.
Paul, R-Ky., questioned the bill's 70-year time frame and said any new spending should be offset by corresponding cuts. The government already faces a $22 trillion debt, a figure that grows every year, Paul said.

Gillibrand said 9/11 first responders and their families have had "enough of political games." The legislation has 74 Senate co-sponsors, including Gillibrand, and easily passed the House last week.
EMBED More News Videos

The bill would extend though 2092 a victims compensation fund created after the 2001 terrorist attacks, essentially making it permanent. The $7.4 billion fund is rapidly being depleted, and administrators recently cut benefit payments by up to 70%.

An agreement to bring the bill to a vote was reached on Thursday.

Schumer said "we have a veto proof majority in the senate, just like we had in the house, although its hard to believe it will be vetoed."

"Finally on the floor this afternoon we worked out an agreement with Senator Lee and Senator Paul. The bill will come to the floor Tuesday. There is nothing that will stop it coming from the floor on Tuesday," Senate Democratic leader Chuck Schumer, also of New York, said. "When it comes to the floor Tuesday, we have already done a whip count, I am confident that the two amendments will be defeated. And that we will get an overwhelming majority of senators for the vote to pass this bill. And the president will sign it finally, finally,finally. We will not stop working until we see the president take the pen and sign this bill into law."

Debate over the measure comes a month after comedian Jon Stewart sharply criticized Congress for failing to act. Stewart, a longtime advocate for 9/11 responders, said lawmakers were showing "disrespect" to first responders now suffering from respiratory ailments and other illnesses as a result of their recovery work at the former World Trade Center site in New York City.