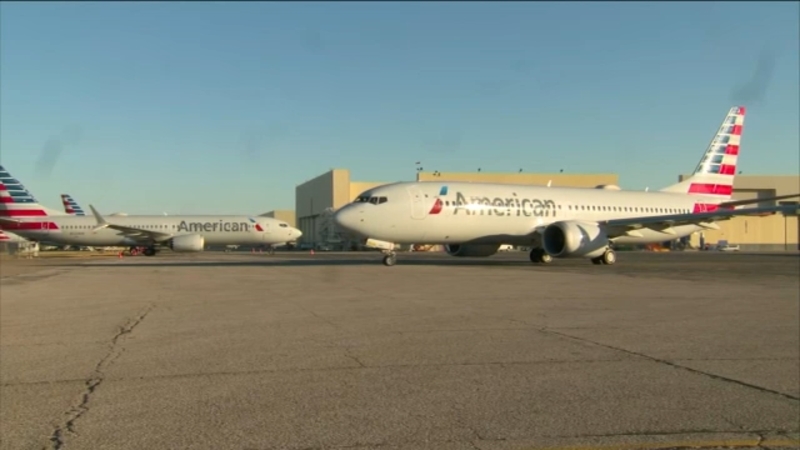 EAST ELMHURST, Queens (WABC) -- The Boeing 737 Max plane returned to the sky in the U.S. Tuesday after being grounded for nearly two years after a pair of horrific crashes that killed 346 people.

Experts blamed a software malfunction for the crashes, and last month, the Federal Aviation Administration approved changes that Boeing made to an automated flight-control system.

In both crashes, in Indonesia and Ethiopia, the system pushed the nose down repeatedly based on faulty sensor readings, and pilots were unable to regain control.

The first flight left Miami at 10:30 a.m. and landed at LaGuardia Airport around 1:30 p.m., followed by a return flight to Miami. All passengers were also made aware they would be flying on a 737 Max.

New Jersey student Justine Lauffer was only on board because her boyfriend -- who loves airplanes -- "made" her.

"I ended up not being nervous," she said. "I knew they did extensive testing and it was going to be very safe, so it ended up being fine."

But others said they had no idea what they were flying on until they were in the air.

"I did not know that," one passenger said. "But I got here safe, so I would say the plane in safe."

The Max was grounded worldwide in March 2019, days after the second crash. Reports by House and Senate committees faulted Boeing and the FAA for failures in the process of certifying the plane, and all pilots have received additional training on the new software.

"We are very pleased with what they've done to bring us to this day," American Airlines president Robert Isom said. "We are confident in putting it back in the air and getting people back to where they want to go."

The airline now says it is the safest plane in the air, but for those who aren't comfortable, customers will have a chance to change flights before getting on board.

United and Southwest also have the 737 Max in their fleet, and both plan to return the planes to service over the next few months.

A new poll out this week showed 57% of Americans were not interested in flying in the 737 Max if they knew about the plane's history.

Regulators in Europe and Brazil have also cleared the way for airlines to resume using the plane if they make certain changes and provide additional training for pilots.

The first passenger flight with a revamped Max took place this month in Brazil. Brazil's Gol airlines and Aeromexico have operated dozens of Max flights.

FAA Administrator Stephen Dickson, a former military and airline pilot, operated a test flight in September and vouched for the plane's safety, saying he would put his family on it.

American plans to make one round trip a day between Miami and New York with the planes through Jan. 4 before putting the Max on more routes.